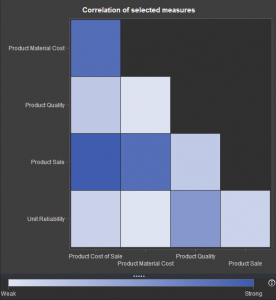 If you've watched any of the demos for SAS Visual Analytics (or even tried it yourself!), you have probably seen this nifty exploration of multiple measures.

It's a way to look at how multiple measures are correlated with one another, using a diagonal heat map chart. The "stronger" the color you see in the matrix, the stronger the correlation.

You might have wondered (as I did): can I build a chart like this in Base SAS? The answer is Yes (of course). It won't match the speed and interactivity of SAS Visual Analytics, but you might still find this to be a useful way to explore your data.

There are four steps to achieving a similar visualization in the 9.3 version of Base SAS. (Remember that ODS Graphics procedures are part of Base SAS in SAS 9.3!)

Here's an example of the result: 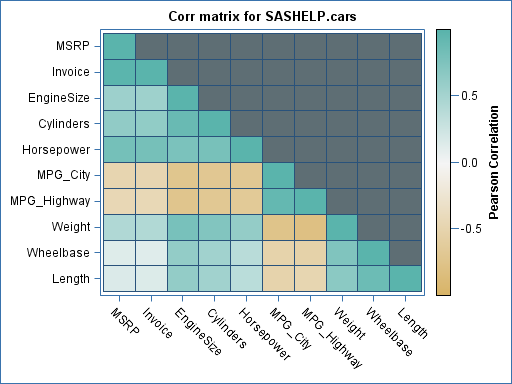 I wrapped up the first two steps in a SAS macro. The macro first runs PROC CORR to create the matrix data, then uses DATA step to transform the result for the heat map.

Note: By default, the PROC CORR step will treat all of the numeric variables as measures to correlate. That's not always what you want, especially if your data contains categorical columns that just happen to be numbers. You can use DROP= or KEEP= data set options when using the macro to narrow the set of variables that are analyzed. The examples (near the end of this post) show how that's done.

You have to define the graph "shell" (or template) only once in your program. The template definition can then be reused in as many PROC SGRENDER steps as you want.

This heat map definition uses the fact that correlations are always between -1 and 1. Negative numbers show a negative correlation (ex: cars of higher weight will achieve a lower MPG). It's useful to select a range of colors that make it easier to discern the relationships. In my example, I went for "strong" contrasting colors on the ends with a muted color in the middle.

You can then use the macro and template together to produce each visualization. Here are some examples:

Spoiler alert: These steps will only get easier in a future version of SAS 9.4, where similar built-in visualizations are planned for PROC CORR and elsewhere.

You can apply a similar "heat-map-style" coloring to ODS tables by creating custom table templates.

If you haven't yet tried SAS Visual Analytics, it's worth a test-drive. Many of the visualizations are inspiring (as this blog post proves).

Finally, while I didn't dissect the GTL heat map definition in detail in this post, you can learn a lot more about GTL from Sanjay Matange and his team at the Graphically Speaking blog.

Big thanks to Rick Wicklin, who helped me quite a bit with this example. Rick validated my initial approach, and also provided valuable suggestions to improve the heat map and the statistical meaning of the example. He pointed me to http://colorbrewer.org, which provides examples of useful color ranges that you can apply in maps -- colors that are easy to read and don't distract from the meaning.

Rick told me that he is working on some related work coming up on his blog and within SAS 9.4, so you should watch his blog for additional insights.