In a previous blog post, I showed how to use the graph template language (GTL) in SAS to create heat maps with a continuous color ramp. SAS/IML 13.1 includes the HEATMAPCONT subroutine, which makes it easy to create heat maps with continuous color ramps from SAS/IML matrices. Typical usage includes creating heat maps of data matrices, correlation matrices, or covariance matrices. A more advanced usage is using matrices to visualize the results of computational algorithms or computer experiments.

Heat maps provide a convenient way to visualize many variables and/or many variables in a single glance. For example, suppose that you want to compare and contrast the 24 trucks in the Sashelp.Cars data by using the 10 numerical variables in the data set. The following SAS/IML statements read the data into a matrix and sort the matrix according to the value of the Invoice variable (that is, by price). The Model variable, which identifies each truck, is sorted by using the same criterion:

The original variables are all measured on different scales. For example, the Invoice variable has a mean value of $23,000, whereas the EngineSize variable has a mean value of 4 liters. Most of the values in the matrix are less than 300. Consequently, a heat map of the raw values would not be illuminating: The price variables would be displayed as dark cells (high values) and the rest of the matrix would be almost uniformly light (small values, relative to the prices). Fortunately, the HEATMAPCONT subroutine supports the SCALE="Col" option to standardize each variable to have mean 0 and unit variance. With that option, a heat map reveals the high, middle, and low values of each variable: 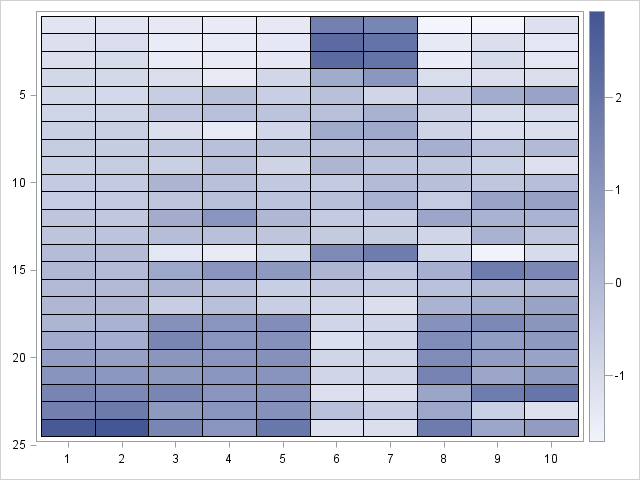 A problem with this initial heat map is that we don't know which trucks correspond to the rows, nor do we know which variables corresponds to the columns. You can use the XVALUES= and YVALUES= options to add that information to the heat map. Also, let's use a three-color color ramp and center the range of the color ramp so that white represents the mean value for each variable and red (blue) represents positive (negative) deviations from the mean. The resulting image is shown below (click to enlarge): 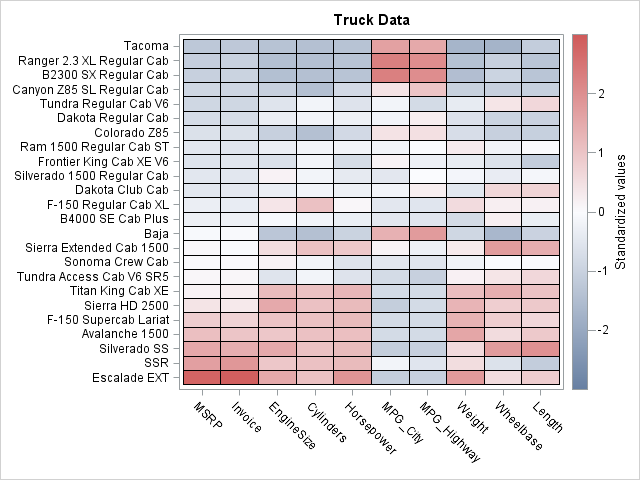 This visualization of the data enables us to draw several conclusions about the data. In general, expensive cars are powerful (large values of EngineSize/, Cylinders, and Horsepower), large in size (large values of Weight, Wheelbase, and Length), and get poor fuel economy (small values of MPG_City and MPG_Highway). However, two vehicles seem unusual. Compared with similarly priced trucks, the Baja is smaller and more fuel efficient. Compared with similarly priced trucks, the Tundra is more powerful and larger in size.

Because the data matrix is sorted by price, it looks like price variables are positively correlated with all variables except for the fuel economy variables. Let's see if that is the case by computing the correlation matrix and displaying it as a heat map: 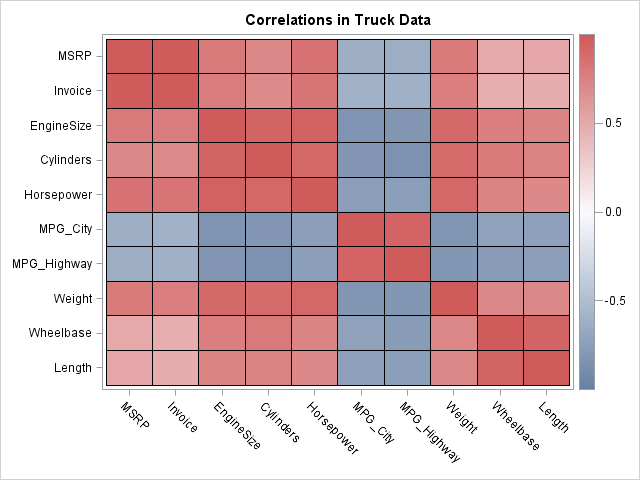 One of the advantages of computing correlation analysis in the SAS/IML language is that you can easily change the order of the variables. For example, the following statements move the fuel efficiency variables to the end, so that all of the positively correlated variables are grouped together:

Can you think of other applications of visualizing matrices by using the HEATMAPCONT subroutine? Leave a comment.