How the power of curiosity unlocks a career in analytics

For some, knowing what you want to do for a job comes very early in life. These people define their purpose and that calling crystallizes in their formative years during schooling and the pathway from education into the workforce feels linear. For many others, finding what they want to do and identifying the path to get there can take a more circuitous route.

When someone experiences the latter journey, an innate curiosity often unlocks the answer to 'What career path will suit me?' For Jiangshan Xu, a student at the University of Technology Sydney (UTS) in Australia, data science wasn't necessarily on his radar at the start of his studies. Still, it's very much guiding him now.

The power of curiosity to create change

Jiangshan began his study at UTS with a Bachelor's degree in Media Arts and Production, focusing on communications subjects and video production – areas focused on the power of telling stories across different visual mediums. It was almost by chance that his analytical talents were uncovered when an elective subject - 'Arguments, Evidence and Intuition' - required him to analyse data using Microsoft Excel and then find and report on trends and patterns.

The need for data, spotting trends and using numbers to tell a story revealed Jiangshan’s need for further study.  After finishing his undergraduate degree, it was apparent that being able to mature his technical skills to better tell stories with data and visualisations would give him an edge in the workforce. This was the catalyst for pursuing his Master of IT at UTS, where the learning and practical assessments offered the opportunity to enhance the skills he learned in the classroom.

As part of the Master of IT, SAS was a key part of the data analytics fundamental subjects. For Jiangshan - coming from a non-data and analytics course - this opened his eyes even further to the careers that were opening up, the opportunities and applications of analytics and how he could combine his innate creativity, with his burgeoning passion for analysing data.

Curiosity is central to Jiangshan's story and saying 'yes' to new opportunities. "My main suggestion would be to participate in opportunities and not opt-out just because it's optional.

"If you find an area you are interested in, dive deeper. Courses provide guidance for getting started in an area but will not cover everything. It's the passion, spending extra time and effort and self-guided learning that leads to achievements," said Jiangshan.

Jiangshan's drive and curiosity have already paid dividends. In late 2022, Jiangshan was announced as the UTS and SAS Postgraduate Data Mining Prize winner. Jiangshan developed and modified a classification model with the highest accuracy as part of his win.

Commenting on this award, Jiangshan added, "It is a great honour for me and great encouragement which guides me to achieve more success in the future. The prize encourages me to continue to work in data analysis and pursue further study and I'll start my career in data analytics after graduation."

SAS has often championed the message of ‘Curiosity Forever’ and highlighted how curiosity, creativity, and analytics go together. It's a testament to students like Jiangshan that using SAS and analysing data has helped spark inspiration and shift from using creativity in video production, to joining the ranks of the next generation of data scientists. 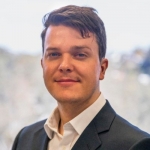 
Nicholas Quirke is a Principal Communications Specialist for SAS who is passionate about sharing stories about the power of technology to do good for our customers, partners and society.