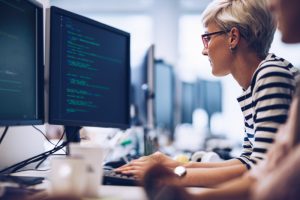 While I am a woman in computer science, let me start by saying that I’m a reluctant coder. I have an eye for data but find the abstract nature of many computer languages to be very challenging and not something I typically love.

My first experience with coding was in 1983 when I was seven years old. My mom enrolled my twin sister and me in a Basic programming class at our local community college. My sister and I were the only kids (and only females) who attended. We learned the fundamentals and how to build and execute simple programs. I started using the computer to do my math homework (and to print Madonna song lyrics).

Fast forward to the early 90’s and the rise of America Online (AOL). I spent a lot of time making mischief on AOL as a teenager, tying up my family’s phone lines with my super-fast (at the time) i486 computer and rocking 14.4K modem. But I never saw this interest as something I could translate into a career.

When I was searching for a career path in college, I saw a listing of salaries for graduating seniors, and computer science had the highest salary. When I changed my major to computer science, it was purely a business decision.

I walked into my first computer science class feeling pretty confident. I had experience with computers. I’d done a little programming. I should be good at this. No big deal, right?

Wrong. I was surrounded by a bunch of guys who really seemed to know what they were doing before classes even started. I was one of five women in the entire department. I constantly felt like I was falling behind because I didn’t grasp the concepts as quickly as the guys around me. For the first time in my academic career, I felt dumb. Asking questions made me feel anxious because I knew everyone in my classes already knew the answers. The languages were all complex and rarely made sense to me. Assembler blew my mind. LISP made my brain hurt with all the parentheses and recursion. I couldn’t imagine myself having to code for the rest of my life because it felt like torture.

Several times I considered just giving up. I was a giant stress ball, but decided to muscle through. One of my professors, Dr. Ron Vetter, a great teacher and probably the reason I stuck it out in computer science, told our class that if he weren’t teaching at the university level, he’d be working for a company called SAS.

I looked SAS up and it sounded like a paradise. I became determined to finish my degree in computer science and get a job at this technological paradise called SAS.

How collaboration and meeting fellow women coders kept me going

I started noticing a trend in my classes. When it came to group work, I was often one of the first ones picked for group projects. My (mostly male) classmates seemed to value my organizational skills and ideas. While I had to work hard to keep up with the languages and the programs, coming up with creative ideas we could execute was easy for me. I rediscovered my confidence through group projects and made connections that made it easier to ask questions without the fear of looking stupid.

My senior year, I was invited to interview at SAS. During my interview, I met with a variety of people from R&D and, unlike my department at school, there were quite a few women. In fact, the person who did most of my interview was a woman. I was sold. I wanted to work for SAS — though I wasn’t sure what I wanted to do there (eight hours a day of coding did not sound appealing, even at this idyllic company).

Computer science is so much more than coding

Since my first day at SAS over 20 years ago, I’ve held positions in tech support, sales support, marketing, enablement and social innovation. Each of my roles has included technical components and some coding, but none have required that I code for eight hours a day every day. There’s always been a wealth of collaboration, and that’s given me the opportunity to try my hand at things I may not have previously considered.

I’ve had the opportunity to be creative and contribute to the development of new products. I’ve had the honor of working with humanitarian organizations to help solve some of their most pressing problems. I’ve presented at SAS Global Forum dressed up as Princess Leia. The first 20 years of my career have been incredibly fulfilling and fun -- and were all possible because I stuck it out and earned that computer science degree.

All that background leads me to this — the hope that women are more widely represented in computer science.  Surely things have improved. There are more women attaining computer science degrees now than when I was in school 20 years ago, right? 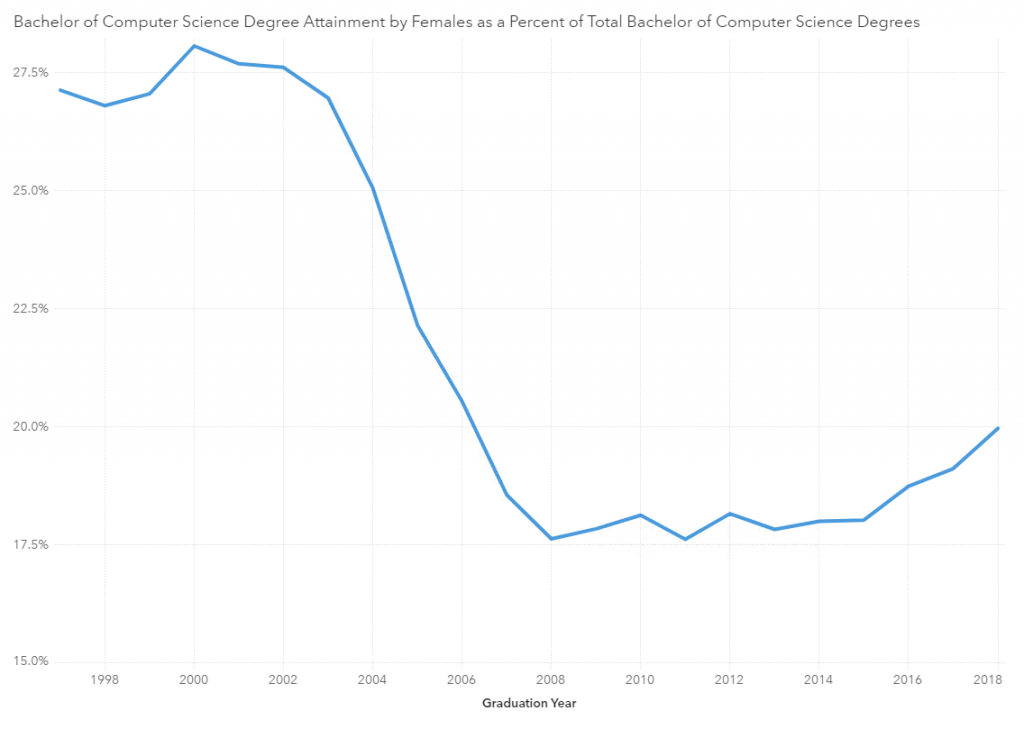 I’d like to think the small upward swing the graph shows over the past five years is due to all the outreach and programs designed to get girls and women involved in coding. Organizations like Girls Who Code are working hard to help normalize the idea of women in computer science. There’s a big push to involve women in not only computer science, but all STEM fields.

However, women are more equally represented in life, physical, and social science occupations, and outnumber men in the field of psychology.

How does SAS stack up next to other software vendors when it comes to gender equity? The SAS global workforce is nearly 40% female overall, with 32% in technical roles and 35% in leadership, which is higher than the industry average. But with the downward trend of women in computer science, what will that breakdown look like in another 10 years?

You might be asking: Why does it matter if women aren't as equally represented in some fields? Some may argue that women are just following the career paths that are of interest to them, and that by trying to encourage more women into traditionally male dominated areas, we’re trying to social engineer the population.

The truth is, it matters because women make up about half of the earth’s population, and according to a study by Deloitte, make 85% of consumer buying decisions in the U.S. When women aren’t included, their voices are not heard, their needs are not considered, and their opinions are overlooked. By creating more gender equity in the computer science field, different ideas and perspectives could ultimately result in increased innovation and improved products and services.

I've been thinking about this a lot as International Women's Day approaches. We need to celebrate women's achievements. Women and girls need to see what other women and girls are doing in computer science. They need role models like Bonnie Ross, who heads the subsidiary studio that manages the Halo franchise for Xbox Games Studios. They need to see that computer science touches everything from gaming to health care to humanitarian endeavors. Technology is ubiquitous and affects all of us. Women and girls need to be more involved in the actual ideation and creation of the technology -- and not just the usage.

If you’d like more information, check out  GatherIQ. There you’ll find a wealth of information about the United Nations Global Goals, including Gender Equality, and a special overview on Girls and Women in STEM.