Two minutes in, I knew the 2017 SAS Global Forum Technology Connection would not be typical or average. For one thing, it was SAS Chief Technology Officer Oliver Schabenberger's show, and nothing he does is ever typical or average. The first surprise of the morning was his entrance. He zoomed onto the stage on a Segway, using slight shifts of his body to turn and spin - a simple example of how machines enhance our lives. Another surprise: The show focused as much on “connection” as it did on “technology.” The program showed off what is new, cool and powerful with SAS technology today while highlighting the people behind the software and what drives them to create and innovate. 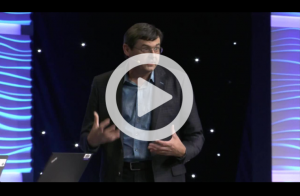 A primary theme of the Technology Connection, lifelong learning, showed up in the video introductions of the presenters as well as in Schabenberger’s own story. He did not set out to become Chief Technology Officer. In fact, he earned his PhD in Forestry. But his love for statistics and his drive to always do things better pushed him from academia to software engineering, where he could work on high-performance computing, analytic platforms, artificial intelligence and other leading-edge technologies. The rest is history. “I am learning every day, and I hope so are you,” he told the audience. “SAS is continuously innovating and renewing itself.” The quest for continuous improvement was clearly evident in the presentations that followed. 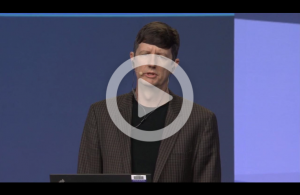 One of the presenters, Ed Summers, innovated in response to a physical challenge. Diagnosed with a degenerative retina disease at 10 years old, Summers gradually lost his sight. Today, he is legally blind and has not seen a chart or graph in 14 years - yet remains a true visionary. He demonstrated the immensely important work he has done to make data visualization and analytics accessible to the visually impaired via SAS Graphics Accelerator. This technology converts SAS analytic graphics into spoken words and sounds. The result charts audibly graph data points, allowing the visually impaired to “see” what the data looks like. With eyes closed, the audience correctly identified upwardly-trending data, much to Summers’ delight. “We all have a unique responsibility to make a contribution to the world,” he said, “and solving accessible data visualization is one I am proud to be a part of.”

The other presenters shared similar enthusiasm for their work. 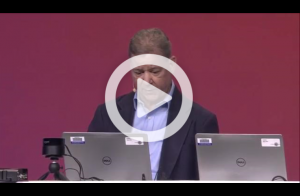 Jerry Baulier, Senior Director of R&D, is so committed to Event Stream Processing and the Internet of Things that he has "ESP & IOT" emblazoned on his license plate. To Baulier, ESP is a part of who he is and his life’s work. During the show, he demonstrated how ESP is used in the automotive industry to analyze the event streams on a remote server or close to the source, called “edge analytics.” He highlighted use cases for connected vehicles, where ESP can not only warn drivers that icy conditions exist but pinpoint actual ice locations on the road. “The move to streaming analytics isn’t just about achieving greater efficiencies,” said Baulier. “It can also make the world a safer place.” 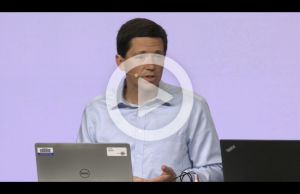 Senior R&D Manager Casey Smith showcased a cool enhancement to Enterprise Guide with the DATA Step Debugger. Smith learned SAS at an early age from his mother, a professor who taught SAS at NC State University for over 30 years. We watched while Smith’s demo “failed,” only to realize he was using the opportunity to show how simple the debugging tool is to use.  Fixing bugs can be time consuming and irritating, so Smith has done his part to make this particular frustration go away. The reason he is so invested in this project: “Real customers are solving real world problems, and the work we are doing helps them do that.” 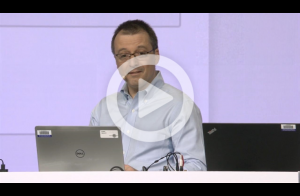 Jorge Silva, Principal Research Statistician Developer, refers to his work with Machine Learning as his “baby.” Silva’s presentation made us of Alexa, the intelligent personal assistant from Amazon. As Silva manned the demo, Schabenberger used voice commands through Alexa to explore NCAA basketball data in advance of the 2017 men’s basketball National Championship game.  Silva’s work with classical machine learning used a factorization
model to predict the outcome of the game. The prediction, North Carolina by 10 points, was only six points off from the actual outcome. 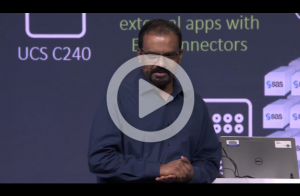 In addition to the software demo presentations, Schabenberger talked Internet of Things with Raghunath Nambiar, Chief Technology Officer of Cisco’s Unified Computing Systems. Cisco has long been a leader in network technology, so partnering with SAS on IoT applications is a logical fit. Nambiar shared the numbing statistic that by 2020, there will be 50 billion connected devices, and SAS-Cisco Edge-to-Enterprise IoT Analytics is a way to get value from all that data. Schabenberger reminded us, “Data without analytics is value not yet realized,” and Nambiar agreed, saying “We are two world leaders, we can bring this solution to the world.”

The passion behind the technology -  A closing conversation with Dr. Goodnight 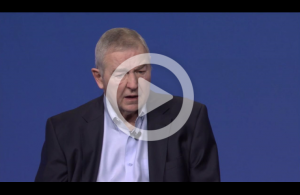 A conversation between Schabenberger and SAS CEO Jim Goodnight closed out the show. Listening to these two technology leaders talk coding and software development was a technology geek’s dream. Goodnight talked about how SAS has continuously improved and innovated through the years, and Schabenberger shared an email he received from Goodnight that changed the direction of his career.  Goodnight wrote: “Oliver, Keith mentioned you had made some of the threading stuff easier. Can you drop by and explain it to me? I will show you what I'm working on." That email marks the beginning of a journey for SAS that led to SAS Viya. The connection between these two tech giants, and the connection between CEO and the powerful software he created, brought a fitting conclusion to a morning devoted to technology connections.

Marcie Montague is an executive and global sales communications manager at SAS. She is a word lover, a technical writer and an obsessive fan of podcasts, and she can often be found in the company of a dog. Marcie is currently a graduate student at University of North Carolina's School of Media and Journalism.