Hidely-hodely, everyone! As you might imagine, the size and variety of the gift inventory at the North Pole puts Wal-Mart to shame. And while we’ve been at this for hundreds of years, we still make too many of some things and not enough of others. No elf can forget the year we were left with 15 million unclaimed wooden hoops because, apparently, pushing a hoop down a hill with a stick was no longer the deer’s ears.

Every year I recommend ways to improve inventory planning and, hopefully, avoid a repeat of the Great Betsy Wetsy Shortage of ’51. But, there’s a resistance to change and a bit of an old elves network. My ideas are ignored. After all, I’m just an associate gift strategist.

But this year, by golly gumdrops, it’s going to be different! I’m about to drop the associate title I’ve had for 213 years because they can’t ignore me this time!

I’m going to walk into Santa’s office…well, my VP…maybe my director…my manager’s office and present valuable information on peoples’ gift giving plans in a way so simple, even a yeti could understand. I’m using SAS® Visual Analytics to share research data that’s sure to keep the North Pole free of thousands of unwanted One Direction lunchboxes.

The 2015 Holiday Shopper Survey contains stockings full of data! With data visualization, I’ve been able to turn it into some quick insights that will have the jolly old elf ho-ho-ho’ing right down Santa Clause Lane. (That’s what we call the closely monitored production line.)

I can hear him now… “Heckuva job, Brownie. Your gift this year is a promotion, along with a bonus of a sack of a dozen candy canes and a 24-oz bucket of maple syrup. Pre-tax, of course.”

As expected, the most money is spent on kids. Thanks to parent’s love and devotion to their children, endless advertising and entertainment tie-ins, we elves spend a lot of time working on pop culture’s “hot, new thing.” This year, significant headcount moved from the X-Men department to the Star Wars division. The Gem & the Holograms group was dissolved entirely.

It’s a bit sad that gift cards have surpassed all other gift categories. We’re not in the gift card biz up here. And while we don’t have revenue goals, we do have production goals and Santa keeps a close eye on the elf to gift ratio. Do you know what spillage is? No, it’s not the sugar-loaded cocoa that coats the floor of the workshop at all hours. It’s the amount of money left unspent as a result of unused or expired gift cards, and it totaled nearly $1 billion in 2014. Something to think about before you send your dad that Hot Topic card.

It’s good to know where people will spend their money. During a recession, we see the spending at discount retailers and dollar stores go up and we adjust our inventory accordingly. In 2008, we couldn’t make enough generic gloves, personal grooming kits and polyester scarves.

The reindeer will be happy to know that more people plan to buy gifts for pets than some of the humans in their lives, like teachers, letter carriers, hair stylists, work colleagues or neighbors. I just can’t imagine not getting gifts for my colleagues. Mainly, because it’s part of our performance objectives. I have enough bells to last me another 213 years.

But those years won’t be spent as an associate! No sirree bobtail, I’m climbing the factory ladder and it all starts with this data visualization dashboard. Just as soon as my manager, director and VP sign off on it. Merry Christmas, everyone! 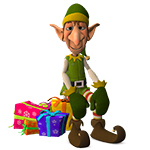 As an Associate Gift Strategist at Santa’s Gift Factory, Brownie Toffeebells is responsible for executing gift strategies as set forth by North Pole management, with other duties as assigned. However, he fancies himself an “idea elf.” Despite being driven by ambition and a constant sugar high, for more than 200 years he has toiled in anonymity, hoping every year that THIS is the Christmas he will get noticed by Santa. He enjoys snowball fights and hot cobbling. Don’t ask.