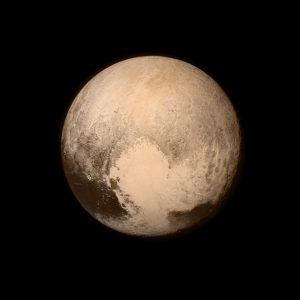 When I was a kid learning about the solar system and building those models out of hastily-painted styrofoam balls of varying sizes, Pluto was a planet. A full-fledged, legitimate planet just like the other eight. But In August of 2006, just 7 months after NASA launched the New Horizons Mission to explore Pluto and beyond, the International Astronomical Union designated Pluto a “dwarf planet”—putting a highly controversial end to its 76-year-old claim as the furthest planet from the sun.

Prior to the New Horizons Mission, the most powerful telescopes we had were only able to show Pluto as a blurry disk. Decades of scientific speculation had determined it to be an icy rock. Our knowledge about this astronomical anomaly was very limited—after all, it’s 3 billion miles away from Earth. Nine years later, New Horizons has made that long journey and is finally reporting back, giving us a glimpse of what this mysterious icy mass and its surroundings really look like.

The probe made its closest Pluto flyby on Tuesday of this week. And on Wednesday, we already had photos. That may not seem impressive until you realize just how far that data traveled to get back to us.

We’re all used to the instant gratification of real-time data transfer, but at this distance, data is coming back to us at only 1,200 bits per second—that’s 50 times slower than dialup speed in the ‘90s. It takes about 4 ½ hours for the signal to reach Earth. The probe took hundreds of photos and gathered an enormous amount of data during the very short flyby period, and it will take more than a year to transmit all of that data back to Earth. But it WILL get here.

A couple of sayings ring true here, and speak to the amazing leaps in communications technology:

Good things come to those who wait.

A picture is worth a thousand words.

For the first time ever, we’re able to explore the furthest reaches of our 4.5 billion-year-old solar system from the comfort of our own homes and offices—all thanks to these lines of communication.

Luckily, SAS’s roughly 7,000 employees outside of the US don’t have to wait that long to receive information from corporate headquarters. The small-but-mighty Internal Communications team makes it a priority to work with contacts in each country to cascade important information about company goings-on. They focus on making sure that all employees—no matter how far away they may be—receive the same news that keeps us all working as one, big, virtual team. Keeping those lines of communication open across the globe fosters a sense of belonging, by guaranteeing that we all get timely, credible, relevant data and on the flip side, all of our voices are heard.

Let’s all enjoy and appreciate New Horizon’s ability to phone home from so far away—and make a valiant effort to be good stewards of information that we too can share as we go about our daily work.

Learn more about life at SAS.

Karen Lee joined SAS in 1984 as a technical marketing representative. In the past 28 years, Karen has successfully merged her technical savvy with her communications know-how to foster a sense of trust and engagement among SAS’ 13,000 global employees. In her current role as Senior Director of Internal Communications, Karen has embraced social media to find new ways to connect employees with one another and with company leadership. She has done this by challenging SAS executives to communicate with employees via individual blogs and live, virtual “chats.” In 2011, her team spearheaded the effort to create an internal social media network known as the Hub, which has created virtual communities for best practice sharing, idea generation and work/life balance. Within two weeks of its launch, the site had more than 3,000 registrants and continues to grow. Karen modeled her team’s structure around a 24/7 news cycle, covering company events with real-time updates on the global intranet site. Gone are the days of “holding the news” until the next day’s publication. SAS employees hear news as it happens. Even with a wired employee base, however, traditional communication channels are not overlooked. Karen established regular “coffee with the CEO” sessions several years ago in which front-line employees are able to interact with and hear about the direction of the company from its CEO in an informal setting. Before being named Senior Director of Internal Communications, Karen was Director of Communications Support for SAS' Research & Development Division. In this role, she found innovative ways to communicate with a traditionally introverted employee population. Using a variety of communications vehicles, such as podcasts and employee expos, she improved information sharing among customers, management and developers. Before becoming a SAS employee, Karen was a SAS customer, using the software for capacity planning in her job at Official Airline Guides. Karen has a bachelor's degree in computer science from Eastern Illinois University. Originally from Westchester, Ill., Karen currently lives in Holly Springs, N.C. Outside of SAS, she enjoys spending time with her family, enjoying the outdoors biking, running and traveling to find new adventures.