As monsoon season begins, many Nepal earthquake victims have shelter over their heads thanks in part to an unlikely intersection of two SAS global development projects.

The first project is with the International Organization for Migration (IOM). IOM is the first responder to any crisis that displaces people. IOM provides temporary shelter and helps coordinate the efforts of other relief agencies that provide food, clean water, medical care and security.

IOM is currently assisting thousands of victims in the earthquake-ravaged areas of Nepal. SAS is helping IOM analyze shelter data to help better allocate resources, based on the work we did with them following Typhoon Haiyan in the Philippines.

Using SAS Visual Analytics, IOM can see where the high-risk shelters are, based on factors such as:

As new data comes in, new insights are revealed. As you would expect, Kathmandu is the focus of the bulk of relief efforts. However, after visualizing data on young children, it was revealed that a nearby district had more small children, ages 1-5, and in particular, five times the number of infant girls as Kathmandu. This smaller district had a larger need for diapers, formula, children’s medicine and other supplies for nursing moms. These were quick, but important, insights to guide relief efforts. 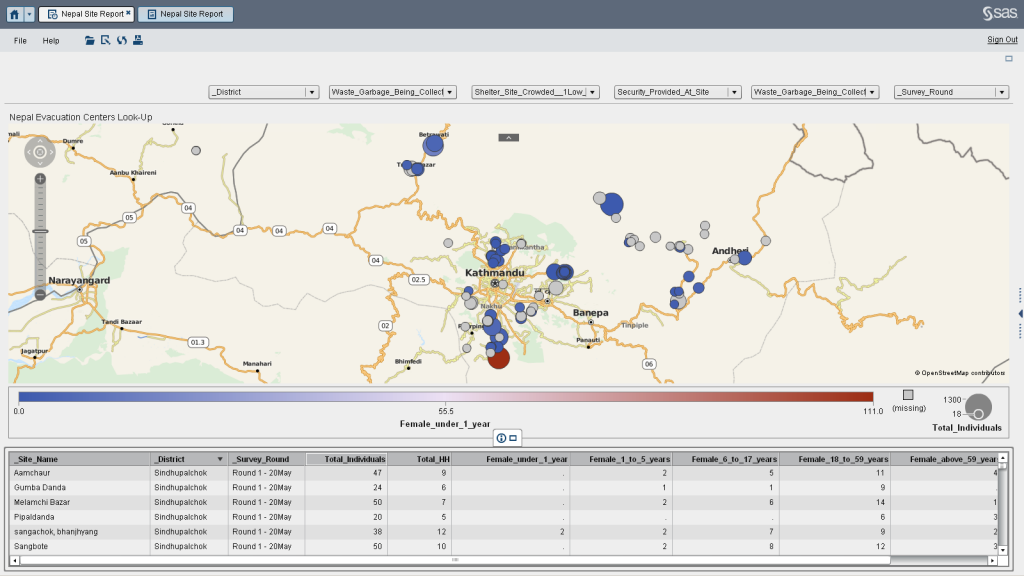 There’s another side to the Nepal data story, though. In April, SAS announced the launch of SAS Visual Analytics for UN Comtrade, which made 27 years of international trade data available using data visualization software. How is this helping with the Nepal earthquake response?

IOM is building temporary shelters for displaced people in Nepal and needed to understand where/how to quickly procure sheet metal roofing (CGI) before monsoon season.  People are sleeping out in the open due to the fear that more aftershocks will bring buildings down on them, so protection during monsoon season is a big concern.

Using UN Comtrade, we were able to show IOM a graphic of the top exporters of CGI. Some of the findings include:

Brian Kelly, who is leading the Nepal response for IOM, shared his thoughts. “Shelter is so important to helping the 63,000 displaced families create a level of stability and protection, especially with monsoon season upon us. With the UN Comtrade information, we were able to secure materials more quickly and, literally, put roofs over peoples’ heads.”

A new era of data-for-good

These projects just scratch the surface of what’s possible when new data, and those that know how to use it, are applied to humanitarian needs. Organizations such as DataKind and INFORMS, through its new Pro Bono Analytics program, are rallying data scientists to lend their time and expertise to helping people around the world. And there are many more data sets out there that could help with relief and other humanitarian efforts.

It’s an exciting time to be in the world of big data and analytics. We’re just beginning to understand how technology can tackle society’s “grand challenges.” Please share your ideas on what unlikely data sources might help with disaster relief. And, how can we bring the world’s analytics talent to bear on these challenges?

As the CEO of SAS, the world’s leading business analytics software vendor, Jim Goodnight has led the company since its inception in 1976, overseeing an unbroken chain of revenue growth and profitability that is unprecedented in the industry. He is recognized globally for being a trailblazer among companies that top great workplace rankings.