I'm a huge Star Wars fan. I got chills when I saw the trailer for The Force Awakens!  Last year for SAS Global Forum, I wrote a paper called Star Wars and the Art of Data Science.  I explored the scripts from the original Star Wars trilogy (A New Hope, The Empire Strikes Back, and Return of the Jedi) using SAS Contextual Analysis and SAS Visual Analytics.

Since it's once again May the 4th, an unofficial Star Wars holiday, I thought I'd revisit the topic. In the paper, I was mainly focused on overall trends from the three movies.  In this edition, I'll zero in on some of the characters.

For Star Wars fans, you'll already be familiar with the results because you've seen the movies often enough to have the dialogue memorized.  Validation can actually be a very positive thing.  It shows that your data processes are sound.

Sometimes, despite thinking you know everything about your data, you may find a hidden gem that leads you to a totally new way of thinking about a problem.  That's the beauty of visualization and analysis.  Those hidden gems (and sometimes even the obvious faces-frozen-in-carbonite) can spark a bit of curiosity.  You wouldn't be an analyst if you weren't curious!

I've gone back through the scripts, filtered them by specific characters and generated word clouds using SAS Visual Analytics.  For more information about the data and the processing that went into turning large amounts of unstructured script data into data that works for visualization, feel free to check out my paper.

First, let's take a peek at the scripts from the original trilogy, focusing on Ben Kenobi.  He had the honor of introducing Luke Skywalker to the ways of the Force. 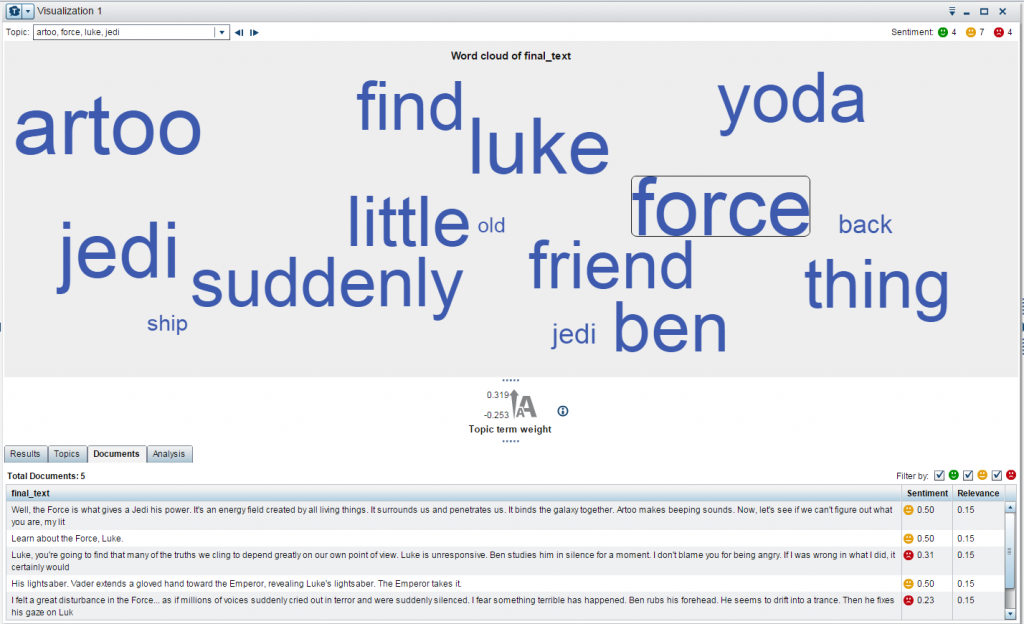 He also had the dubious honor of letting the cat out of the bag with regards to Luke's dad. 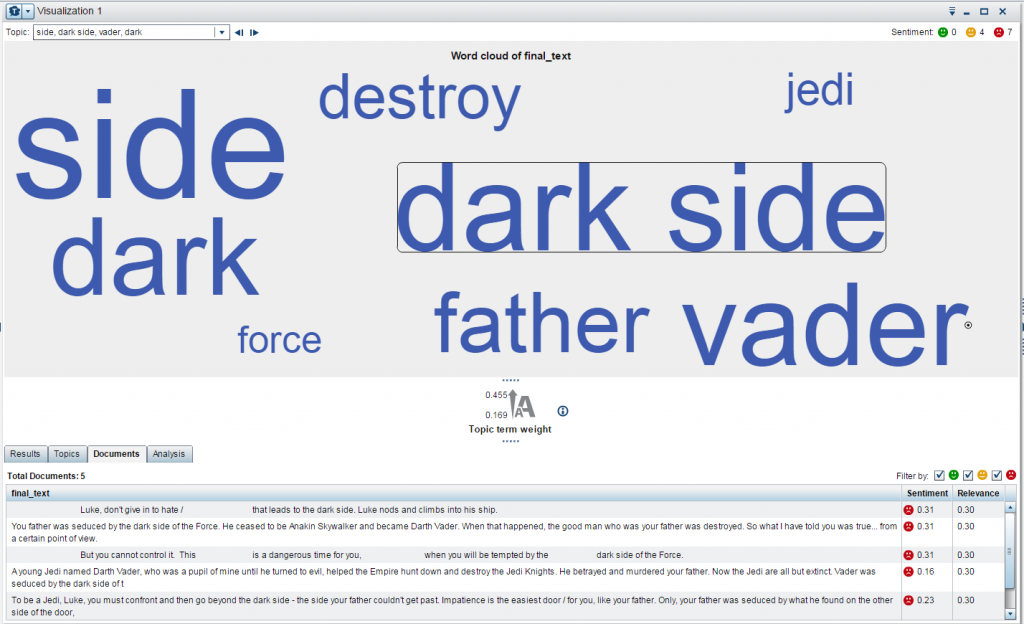 Next, I wanted to take a look at the stuck up, half-witted, scruffy-looking Nerf herder, Han Solo.  You can see from the topics surrounding his character, that he's always either causing or embroiled in some sort of trouble. 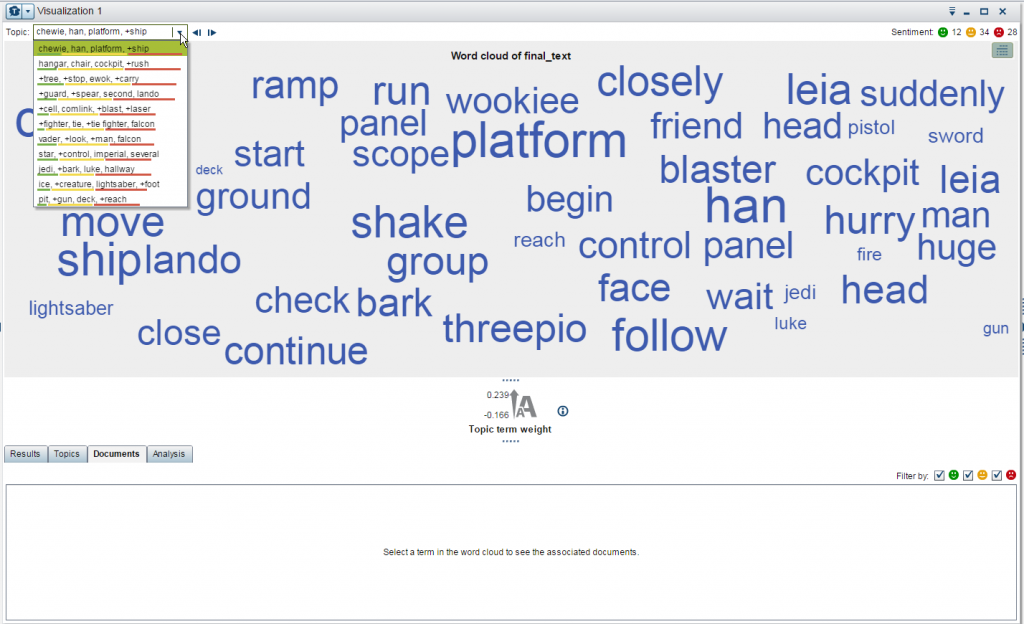 The Star Wars movies have sometimes been maligned for their lack of female characters, but the leading lady isn't your traditional Disney princess.  She often takes the lead, and the kisses are always noteworthy (especially when she kisses her brother.  Ew!).  🙂 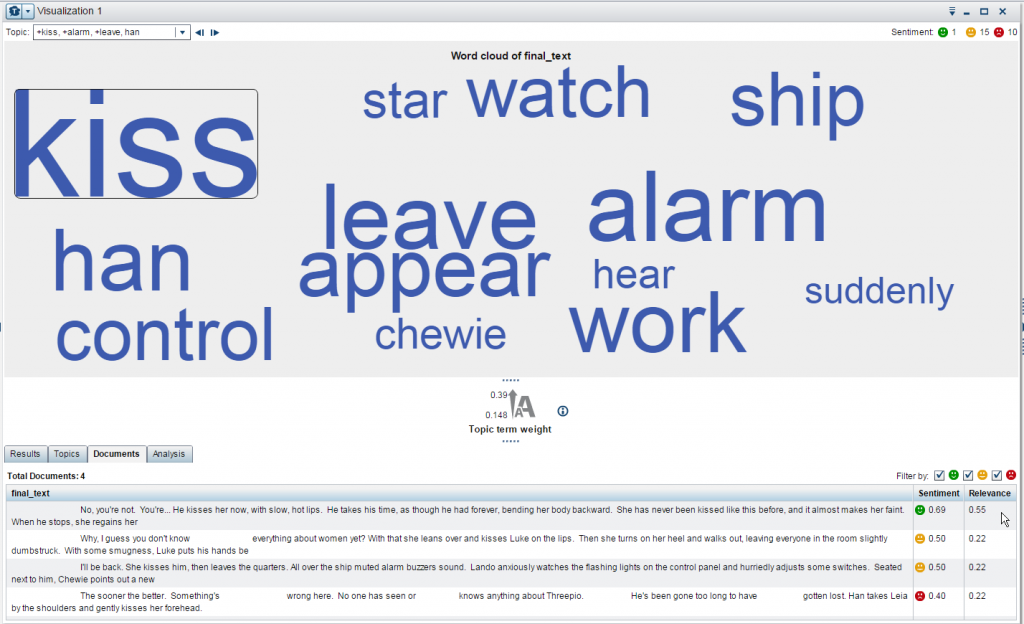 C-3PO (Threepio) is a totally anxiety riddled droid who acts very much like a mother hen. He has the second highest number of lines across the original trilogy because he's always panicking about something. 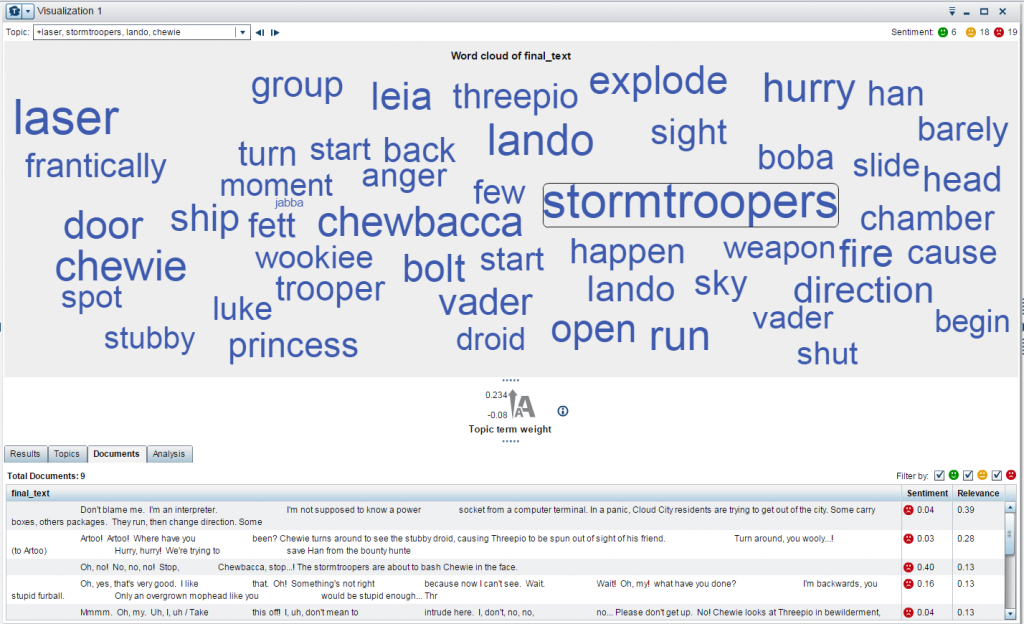 I'm starting to think that I should have saved this content for Father's Day!  This is a view of the data filtered by Luke and focusing on Father. 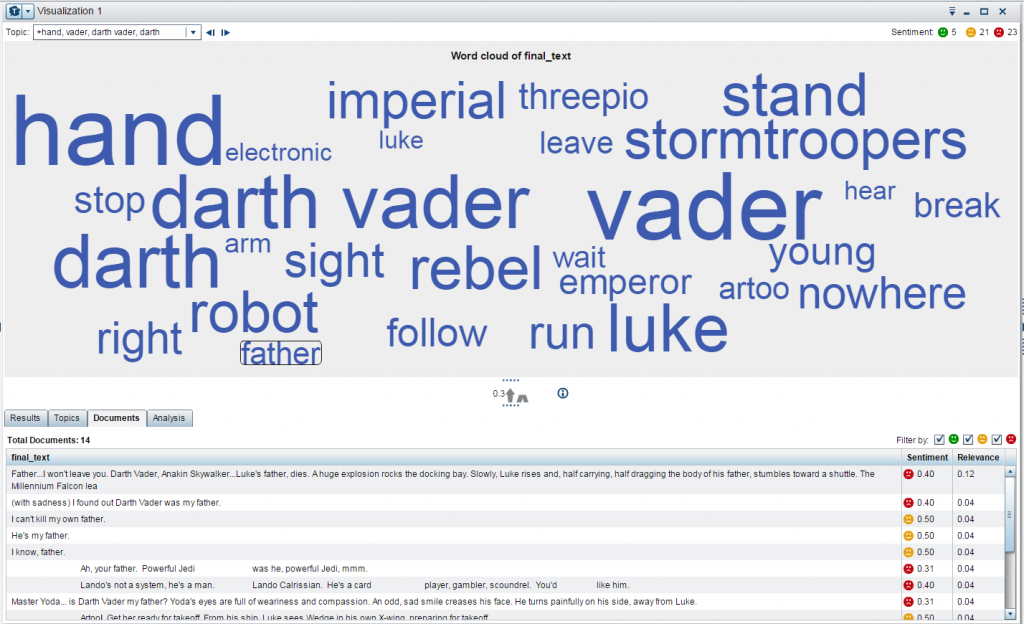 I hope you've enjoyed this brief tour into the original Star Wars trilogy as much as I enjoyed putting it together.  Thanks for reading, and may the Force be with you!