Just ask Jake Porway, former New York Times Data Scientist and now CEO of DataKind, who opened his April 28 SAS Global Forum keynote by asking busy conference goers to pause and reflect on the revolutionary times we are living in.

“Cell phones now outnumber the number of people on the globe. Almost every activity we take online is digitized and tracked…We’re starting to instrument our bodies as if they were machines,” he said. “Almost every interaction we now have with our world or between each other takes place with a digital interface in between, something that creates data…data that allows us to see things we’ve never seen before.” 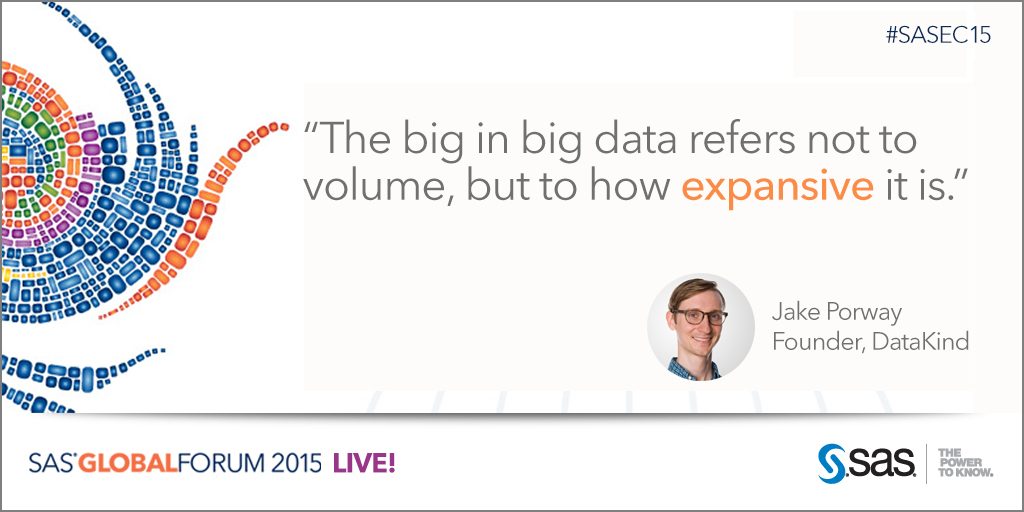 As a society, Porway believes we’ve done a good job of using this data to help people find things such as products and movie recommendations. But he’s interested in what else that data might inspire us to do to serve the greater good.

"To me the word ‘big’ in big data means expansive,” he said. To illustrate, he shared the example of Kilimo Salama, an organization that uses data to positively impact the lives of farmers in rural Africa, connecting them to micro-lending and micro- insurance resources via cell phone. “You wouldn’t think of this small nonprofit as a data company, but now they have data pouring off of these cell phones.”

The challenge often falls on the back side of that data deluge as a great number of social organizations don’t know what kind of data experts they need, can’t afford to have them on staff, or don’t recognize the potential of the data available to them. “Most of the people in the social sector aren’t having the conversations we’re having inside this conference,” he said.

He founded Datakind to bridge the skills, literacy and financial gap, bringing together probono data scientists with social organizations who need help. Volunteers can offer an hour or two, participate in weekend hackathons or volunteer for assignments that span several months. 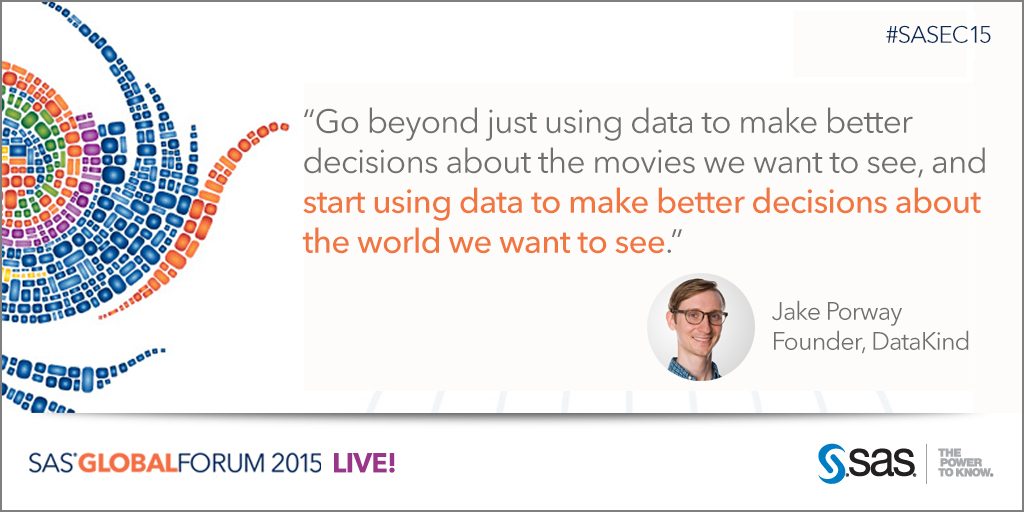 A recent DataKind project paired volunteer data analysts with DonorsChoose.org, an organization familiar to US SAS employees and one that enables public school teachers to submit wish lists for materials to help their students learn. Porway said that in addition to filling classroom needs, the data generated by DonorsChoose can lead to even greater insights with long-term, broadspread impact.

Volunteer data scientists are now extracting information from DonorsChoose data and making it available to cities, counties and public education forums to help local leaders justify changes to funding models and public policy. “That speaks to the power of what you can do when you have analytic skills,” said Porway.

DataKind now has more than 60 such projects, 7,000 volunteers and six international chapters. Porway invited audience members to help grow those numbers by getting involved, either at a high level of complexity or in simply helping organizations muddle through foundational work of helping to figure out the issue, scope the problem and test. “While I know there is this excitement to go out and do hackathons…I would say 90 percent of DataKind’s work is in the unsexy stuff,” he said.

Porway also pleaded with attendees to help demystify the type of work done by data scientists, calling foul on complicated word clouds and debunking the myth that it's found in ‘binary tunnels of doom.' “Data is so much more personal than that,” he said.

He noted that even visual marketing images of big data tend to make people and solutions appear lost or hidden, showing an example of a lone business-suit clad man standing in a rowboat in the middle of a raging sea. “The only thing those pictures seem to agree on is that big data is blue," said Porway. "So…that’s awesome.” He implored attendees not to make big data so scary and foreign. “It’s so important that we show examples of what this can really do.”

He believes individuals are more likely to get involved if they feel big data is more approachable. “The big changes may not come from companies and governments,” he said, “but from just you and me, sitting down and hacking on stuff we can do now on our laptops, alone in our apartments in our underpants.”

Data step 1: Get involved in the data-for-good movement

Regardless of title or position, Porway hopes everyone will seek ways to get involved in the data-for-good movement.

“This isn’t just a tech problem. It’s not just a nonprofit problem. It is a giant, exciting social opportunity that is only going to work when all of us are involved – not just to make better decisions about what movies we want to see, but what kind of world we want to see.”

Watch the full presentation below, and learn more about putting your data to good use. Some of the best content comes out in the Q&A session at the end, so don't hit pause too early: 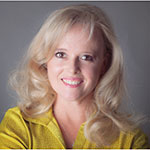