The Internet of Things is going to be driven by innovative business models as much as by innovative technology.  In order to ground the following discussion, I found it helpful to create this visual depiction of the IoT that defines and distinguishes the key elements that enter into these business models.  My simplified definition includes these six elements:

Business models involve both value creation and value extraction, and it is important to at least recognize that there will inevitably exist a category of “rent seeking” business models that create no reciprocal value.  These are largely the infrastructure components whose real value is primarily defined by ‘capacity’, such as network hubs / platforms, network pipe and switches, and the Last Mile, where they all seek to extract value from the IoT by virtue of their position as chokepoints.   While these may initially pass as viable business models, I expect most to eventually succumb to market and regulatory forces.

Having gotten that unpleasantness out of the way, let’s turn our attention to the business models that create value via their “Things”.   The fundamental case that kicks everything off is of course that of providing and owning the server, a device, and the data generated between them; a straight forward, one-to-one relationship.  After that, everything else flows through the Third Party / Cloud component:

That’s pretty much about all there is to the IoT.  Piece of cake, right?  There’s a lot more detail to be explored beneath each of these aspects of course , but this simple framework should at least provide you with a starting point for brainstorming where you might want to play in the future of the IoT.  Here are four great resources / articles for digging further into those details:

One obvious consideration is your ability to access the data and devices.  Can you get access to the data, and at what cost?  Can you get access to a configurable device, and if so, can you voluntarily reconfigure it?  The flip side of this is security - If you are a device/server/data owner, can you protect your data and your smart devices from involuntary reconfiguration (i.e. hacking)? 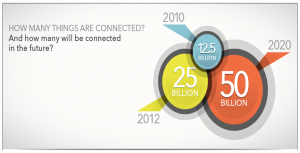 Beyond that, the salient fact that should jump out at you is that there are infinitely more ways to add value via the network / cloud / third parties / connections / additional devices than through the direct device-to-server connection.  I flirted with this point in this previous post, “The Value is in the Network”, and I would reinforce that the devices are not the endgame, the IoT is not the endgame, even the customers are not the endgame - the Ecosystem is the endgame.

My emphasis in that previous post was around monitoring the network and enhancing your data management / integration/ exchange capabilities across that network. The IoT raises the bar to from simply monitoring to “managing” your network, actively managing your ecosystem, cultivating partners whose devices, servers and data and add value to your own, and vice-versa.   On the IoT, the sum is greater than the parts.  If in your business model 1+1+1 only equals 3, you are quickly going to find yourself pushed aside by an ecosystem where the sum comes to 4 or 5.

For better or for worse, the smartphone is becoming our remote control for life.  But it’s just a remote.  The value is in the content, and the content is coming from all corners.  If you are an IoT player, it isn’t even 'remotely' about you anymore. But it is about you AND your friends.  Successful IoT business models will come down to playing well with others.  Rather than hunkering down behind your IoT firewall, get out there and make friends, starting with making it easy for potential friends to play with you.