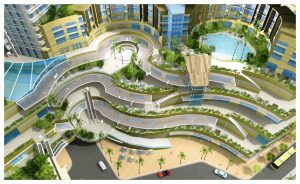 “Within ten to fifteen years, the typical US mall, unless it is completely reinvented, will be a historical anachronism—a sixty-year aberration that no longer meets the publics’ needs, the retailers’ needs, or the community’s needs.”  So proclaimed Rick Caruso, founder and CEO of Caruso Affiliated, a retail/commercial real estate development firm, at NRF earlier this year.

Is his concern properly placed?  How bad is it?

Bad.  So bad that there is even a web site called “Dead Malls”.  I counted over 400 listed in the U.S. alone.  In some cases the buildings have been converted into educational or other commercial use, in others the parking lot was saved but the mall demolished to be replaced by a big box store.  Many, many others are simply boarded up, closed off to the public, awaiting disposal.

Ecommerce of course accounts for a portion of the impact to the traditional mall, but even now, in the middle of the second decade of the 21st century,  online shopping represents only 6% of total retail commerce, growing at a rate slightly in excess of 15% a year.

But the internet’s impact has been far greater than just that 6%, it has changed the entire shopping experience, birthing multichannel marketing and the omnichannel consumer.  I don’t think I can singlehandedly save the mall with the remainder of my 900 words today, but I do want to address in broad terms some potential scenarios.

Which of these, or which combination, if any, will come to pass?  After my bracket-busting disaster in this year’s March Madness (I picked the ONLY twelfth seed not to win (I had no choice - all three of my kids go there), and NONE of the other twelfth seed upsets that did happen) I am loath to prognosticate further. But one thing that is certain is that no matter which scenario comes to dominate the retail space, change is on the way, and you are going to have to get closer to your customer.  You are going to have to know more about them, their changing buying and channel habits, and the type of shopping experience they prefer.  Customer analytics will come to drive your business strategy in recognition of the fact that it has always been the consumer that ultimately decides whether that business strategy is a success or a failure.