In this interconnected world, it is more important than ever to understand not just details about your data, but also how its different parts are related to each other. Social networks reveal often surprising details about what people think about your product or services, how they are linked to other social communities that could influence your business, and even where your influencers are located. Understanding these networks will give your business unique insights and help making decisions such as who to target in your next marketing campaign.

Networks are everywhere. Unlike the abstract world of relational databases, in the real world everything is interrelated. In recent years, companies like Facebook, Google and Wal-Mart have harnessed the power of networks of relationships, information and supply-chains to dominate their competitors.

A network is defined as a collection of objects, or nodes, in which some pairs of nodes are connected by links. A link can represent any kind of relationship. This definition is very generic, explaining why we can find networks in so many diverse domains.

In mathematical terms, networks are represented by graphs (not to be confused with the common term used to describe some data visualizations). The interconnected objects are represented by mathematical abstractions called vertices, and the links that connect some pairs of vertices are called edges. Graph properties are the subject of study of a branch of discrete mathematics called graph theory.

Along the same lines, network visualization is based on of the visual display of graphs. The most common form is the node-link diagram which uses a set of dots or circles to represent the vertices, joined by lines or curves to represent the edges. Vertex attributes can be mapped to visual node characteristics like size, color and shape. Edge attributes can be mapped to link width and color.

A peculiar aspect of complex systems, and one of the reasons they can be so difficult to predict, is the interplay between its structure and the behavior of its components.

This interplay is particularly visible in social networks. Who you know affects what you do, and vice versa. In the scenario depicted below, the network is comprised of actors -- mostly people, but sometimes even automated agents or bots -- linked by their relationships and the actions they enable, like following, liking and re-tweeting. The impact of what the actors do is largely a function of with whom they relate. Actors in critical places in the topology can affect the entire group in drastic ways.

So how do we go about understanding social networks? We begin by asking two basic questions:

Together these questions reveal how the macro and micro aspects of a network influence each other. Key actors shape the network structure while communities define the scope of their influence.

In one of my previous blog posts I demonstrate how to load Twitter tweets into SAS Visual Analytics. In this blog I will use tweets to demonstrate the analysis of social networks. If you are importing (crawling) Twitter tweets for a longer period of time you will have a substantial amount of tweets collected. In order to help us analyze the network we are going to add network metrics to our data using PROC OPTGRAPH (part of SAS Social Network Analysis). In the future you will be able to perform similar analysis all in SAS Visual Analytics, joining other advanced capabilities like forecasting and text analytics.

In this example, I downloaded Twitter feeds filtered by using hash-tags such as #SASUSERS, #SASGF14, etc. The input table has the following structure:

As explained in the previous section this particular network is represented by the users behind these tweets (not the tweet text itself) and their relation to other users (A likes B or A follows B). Based on that we are going to build an ungrouped data structure that includes the two main columns FROM_ID and TO_ID (Twitter user id). The RELATIONSHIP column indicates what this link represents: 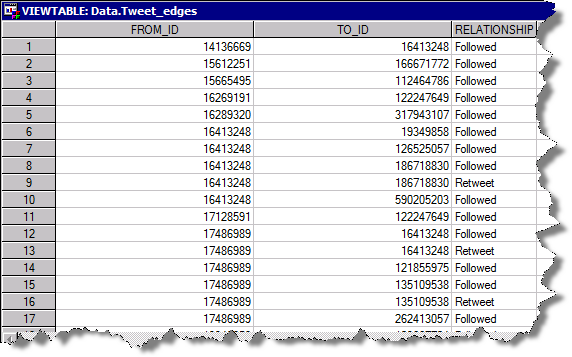 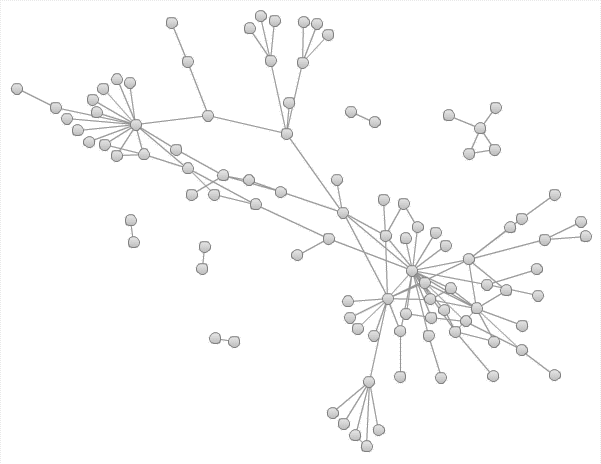 Assigning a people attribute such as "Followers" shows first insights about people or institutions involved in this network. 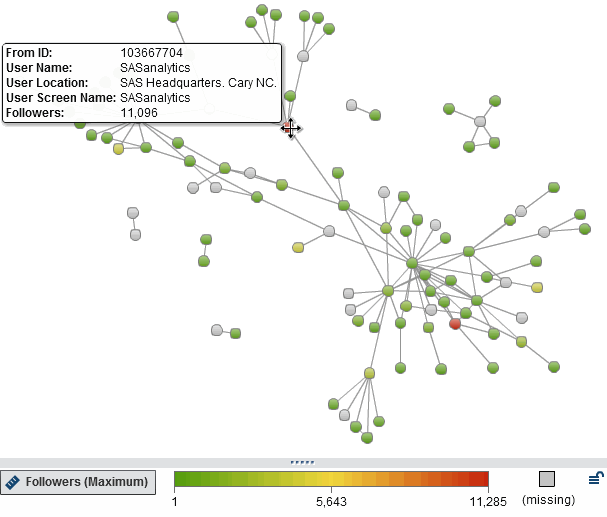 As you may have guessed, having many followers doesn't automatically mean you are an important person within this network. So let's have a look at how to gain more insights about this network by determining communities and key actors.

Community detection, or clustering, is the process by which a network is partitioned into communities such that links within community sub-graphs are more densely connected than the links between communities.

The following OPTGRAPH statement calculates two community groups based on the given resolution. A larger resolution value will produce more communities.

The result table TWEET_GROUPS shows the membership of each node (tweet user): 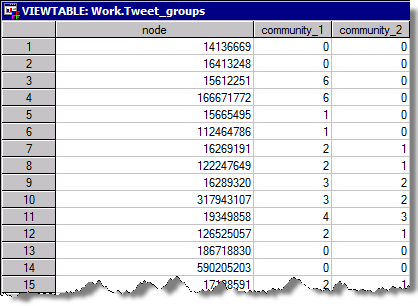 Merging the community information back to our main network table and loading the data into SAS Visual Analytics - we can highlight communities by assigning a color role: 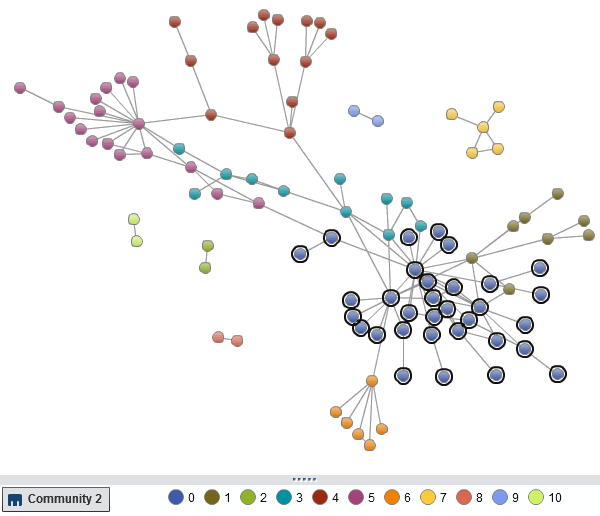 For such a small graph, network visualization by itself can provide many insights. We can see a clear bifurcation within the network, where each region appears to cluster around central communities. We can also see sparse peripheral structures with long "pendant chains". But we can learn a lot more about this network structure by using community detection.

We can use this information to color the visualization by community allowing us to clearly differentiate between them. Furthermore, we can use the community information as a categorical filter. That allow us to narrow our focus to a single community at a time, a starting point for further exploration and analysis. With less data we can add more detail, like labels and arrow directions, without the risk of overwhelming our ability to make sense of the visualization. 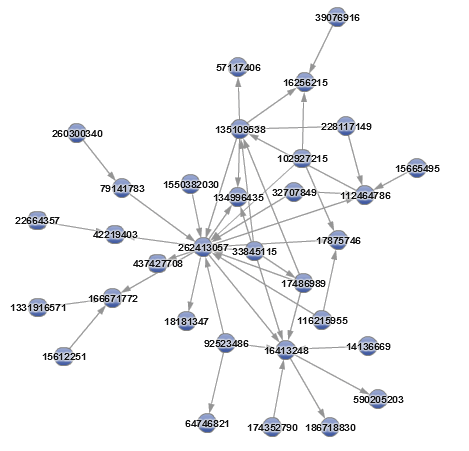 As most of the registered Twitter users also reveal their location as part of their profile we can also apply geo coding in order to visualize the network on a geographical map. We may now use the geographical representation of the network to further narrow down our node selection. 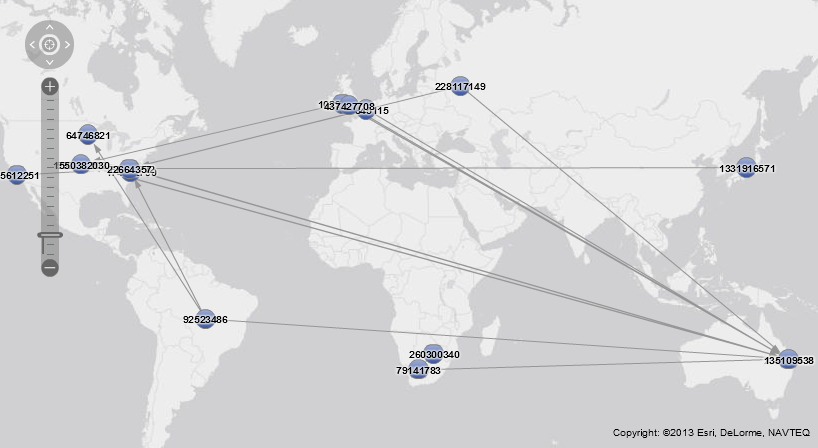 There are different ways to measure who is important - or central - to a network. Examples of such centrality
measures include:

The following OPTGRAPH statements calculates these network metrics for us:

The result is a set of two tables. The first table contains node (tweet user) attributes: 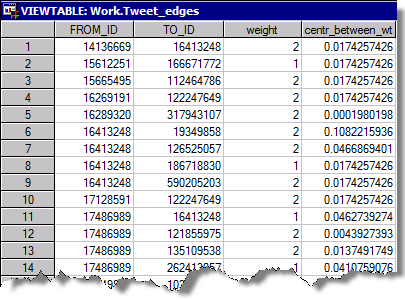 Again, merging the new network metrics back to our main network table and loading the data into SAS Visual Analytics shows interesting details about our key players, e.g. who is close to other actors (closeness metric): 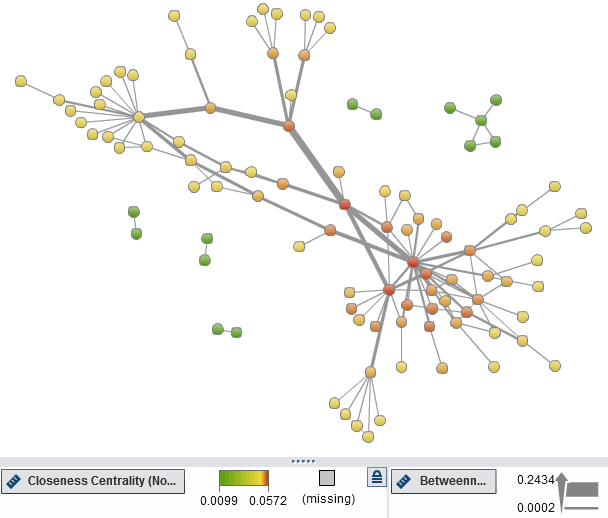 Key Actor Analysis identifies critical nodes in a social network by plotting actors' scores for Eigenvector centrality versus Betweenness. Any actor with a high score on both measures is obviously an important node in the network. But given how these measures are expected to be approximately linear, any non-linear outliers are also considered to be key actors playing very specific roles.

An actor with high Betweenness but low Eigenvector centrality may provide the only path to a central actor. These are "gate-keepers", connecting actors to a session of the network that would otherwise be isolated from the core. On the other hand an actor with low Betweenness but high Eigenvector centrality may have unique access to central actors. These are "pulse-takers", well-connected actors at the core of the network.

The implementation of the Key Actor Analysis in SAS Visual Analytics is straightforward. The bubble plot makes it easy to visually identify the key actors and data linking and brushing between the two visualizations highlights these actors in the context of the network structure. We can identify the core leadership, the mid-level actors (pulse-takers) and the bridges between communities (gate-keepers). 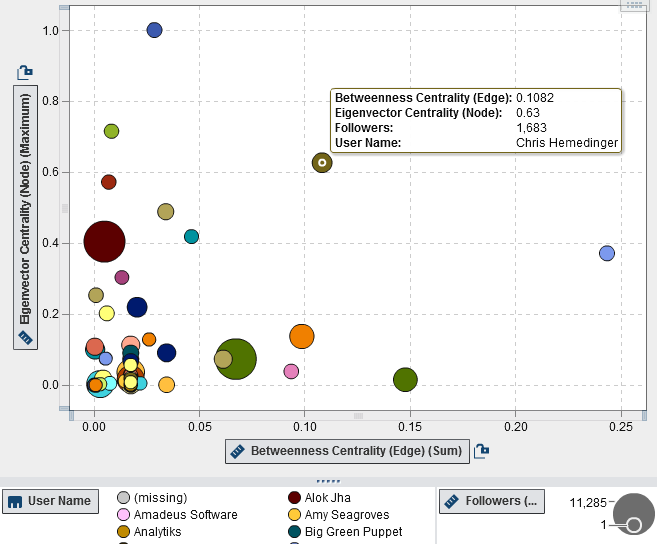 Clearly, our very own Chris Hemedinger is an important part of this network.

Enjoy the power of networks!