Many parents when naming their children, want to choose a name that they like, but that isn’t so popular that everywhere they go they hear it being called. But even for the most popular girls’ and boys’ names, how likely is it that there will be children with the same name in one class? It may not be as likely as you might think!

My wife, Jo, and I asked ourselves this exact question when choosing our daughter's name.

My firstborn was a boy, and there hasn’t been a girl on my side of the family for almost 100 years. So, when we discovered we were having a girl, we were very excited, but we hadn’t given a girl’s name any serious thought!

To find a name that my wife and I liked, we spent hours looking through baby name books, reading blogs and talking to friends and family. Our shortlist was as long as my arm, but we managed to come up with a top five, which happened to include three of the most popular girls’ names: Ava, Olivia and Isla.

Then, I noticed just how popular these names were. On three separate occasions, I took my son to the park, and I heard other parents calling out the three popular name options. I thought to myself, “What are the chances?”

As a data scientist at SAS, creating models and analysing data is a typical everyday experience. I decided to put my skills to the test and work out the approximate probabilities of children having the same name as one or more of their classmates.

The most popular boys’ and girls’ names

Jo sent me a link to the ONS list of most popular names published in 2021 and it Includes the raw data for the total number of registrations of each name in England and Wales.

I looked at this list of names and thought to myself, “if we pick one of these, our daughter’s probably going to end up in classes with other girls with the same name.” As a data scientist, I was curious to quantify this belief with data. My wife, of course, simply rolled her eyes.

In 2020, Olivia was the most popular girl’s name for the fifth year in a row. So, the question was if we name our child Olivia, how likely is it there’s going to be another Olivia in her class?

The problem with looking at the raw numbers is that many names are registered annually. Despite being the most popular name for five years in a row, the probability of being named Olivia is very low since it accounts for only 1.4 percent of all girls’ names registered. Traditional statistics can be misleading here, though, because we’re really interested in the conditional probability of sharing the same name.

Using the ONS data and SAS analytics tools, I could work out the conditional probability of two or more children having the same name in one class for each of the names on the list.

Find out the chances

Put simply, conditional probability relies on observing the number of combined occurrences. In this case, the number of children having the same name in a group. Since we only had the total number of registrations by name, we could not directly observe this in the data. This is where we can leverage simulation to approximate the actual probabilities.

We took the known likelihood of a name occurring and then simulated that in 10,000 classrooms to see how likely a name will appear in one class at least twice. In each class, we assumed there were 15 girls and 15 boys. Why 10,000 classes? To approximate the actual likelihood, it’s important to simulate many samples, so 10,000 classrooms meant simulating 300,000 children altogether.

Taking Olivia as an example, I found that despite a 1.35 percent chance of having the name, there is a 12 percent chance of another Olivia in the class if your child's name is Olivia. Given that this is the most popular name, this feels more intuitive than a probability of less than two percent. 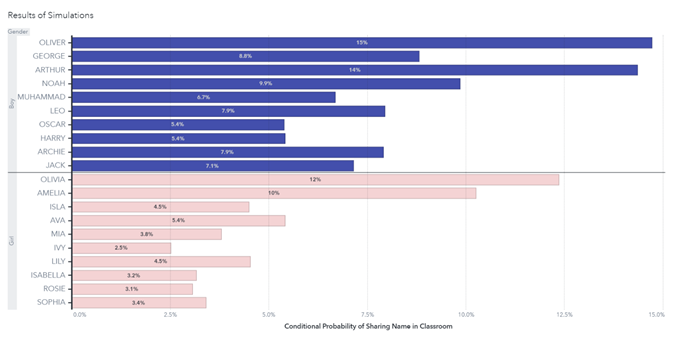 It would help if you remembered that probability only relates to likelihood and rare events can still happen in practice. Our simulations did have some classrooms with three Olivia's and up to four Oliver's with the boys’ names! The data only considers the combined registrations for England and Wales, and popularity varies at a regional level. For example, Amelia was more popular in London and the West Midlands than Olivia in 2020. Given that students come from all over the country at the university level, perhaps this is a better indicator of sharing the same name in a university class than in regional classrooms.

With that in mind, parents who want to choose a popular name should feel confident choosing their favourite, but you may also want to think of a good nickname in your back pocket when it comes to primary school!

Harry is part of the Data Science team at SAS UKI. He has an academic background in economics and data analytics and has experience in advanced analytics, business intelligence, and cloud computing, including open-source data analytics with R, Python and SQL.