One game down, one more to go. Yesterday’s analysis on Belgium and France predicted a balanced game, which in reality proved to be the case as well. Congratulations to France for reaching the final!

Today we look at the other semi-final between England and Croatia. Again, we worked with our partner SciSports to analyse the strengths of the teams. SciSports provided their SciSkill data to SAS for visualization in SAS Visual Analytics. Regarding the SciSkill index:

“The SciSkill Index is a model based on different mathematical algorithms developed by SciSports to estimate the current and potential level of an individual player, based on the contribution of a player to the team result. The index is based on match results (and goals), strength of the opposing team, the number of minutes played, amount of games played, position on the field and the league strength. The SciSkill values are updated after every match. The SciSkill Index database contains 90,000 active players, 3,698 clubs and 244 competitions.”

So, what does the data tell us this time?

Comparing the teams competing in the tonight’s semi-final, England and Croatia, we can see the following picture when looking at it by positional group on the pitch: 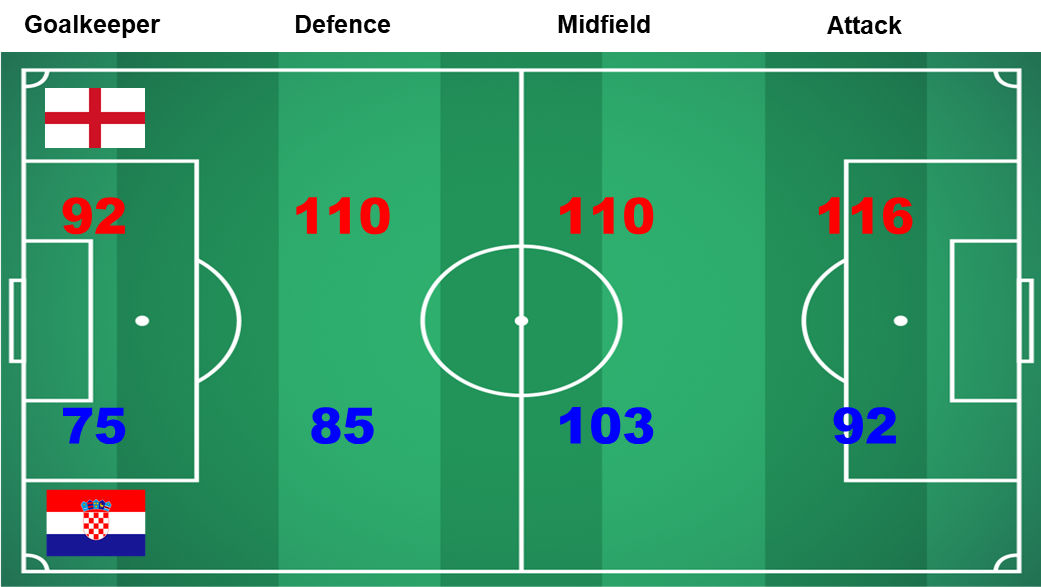 England is clearly having more quality available across all positional groups, according to the data. Croatia’s midfield is key for their link play though and could be the difference with international superstars Ivan Rakitić and Luka Modrić to name a few.

With potential Golden Boot winner Harry Kane up front as the tournament’s top scorer so far, England have a very strong looking side. Let’s take a look at the other top players per side, ranked by SciSkill:

Another interesting fact about the England squad is their relatively young average age of 26,0 years, the 2nd youngest squad to make it to the 2nd round of this tournament, after France with an average age of 25,9 years (and we all know how they fared last night). This young age shows in the potential SciSkill ratings several of the players can still reach, if they keep developing themselves like they’ve done until now.

The table below shows the top 5 Potential SciSkill ratings of England players who are 24 years old or younger. Dele Alli and Raheem Sterling lead the pack with Potential SciSkills of 165,5 and 163,3. To bring these extraordinary values to life, the player with the world’s highest SciSkill today is Neymar with 156,7!

On the contrary, Croatia is a relatively older team with an average age of 27,8. But with age comes experience, so maybe that could be the deciding factor in the game?

In summary and as conclusion: judging by the data, England seem to be the clear favourite. They should have more quality available in all areas of the pitch, and also have a lot of talented players to bring off the bench to impact the result.

Croatia have already shown what they’re capable of though, with the 3-0 group win over Argentina as the highlight so far. Besides, this could be the last attempt at the world stage for their stars Ivan Rakitić and Luka Modrić, so surely they want to make it count?!

We’ll have to go with the data though, and predict England as winner. What do you think?

This report was made as a cooperation between SAS Software and SciSports. Read more about SAS and SciSports working together.