Ridgeline plots are useful for visualizing changes in the shapes of distribution over multiple groups or time periods. Let us look at an example of how we can create this plot using the SGPLOT procedure that is part of the ODS Graphics Procedures. For this example, we will plot the distribution of temperatures across months for the town of Cary, North Carolina in 2019.

To get the data for the plot, I discovered an API service that provides weather data in json format.  We can use PROC HTTP and the JSON engine to get the input raw data and read it in SAS. Below is the code snippet that fetches the data for the year 2019.

Figure 1 shows a snippet of the SAS dataset. The list below only displays relevant variables we will be using for the plots discussed in this article. Here is a brief description of the variables.

Figure 1. Partial SAS dataset for minimum and maximum temperatures for the month of December in 2019.

We will need to process this dataset and derive necessary variables and statistics before we can generate the plot. The required steps are outlined below:

Step 1: Compute the kernel density estimates for the variables of interest.
Step 2: For plotting purpose, re-scale the computed density estimates so we can stack multiple density plots on a common axis.
Step 3: Prepare data for reference lines to indicate the name of the month.
Step 4: Consolidate all the data into one SAS dataset.
Step 5: Create the plot using PROC SGPLOT.

Visualizing the Distribution of Maximum Temperatures in 2019 Across different Months

Step 1: For computing the kernel densities, you can either leverage CAS Language (CASL) and CAS actions in SAS Viya or the KDE procedure in SAS 9. Let us see both methods.

Method 1 - Using SAS Viya: I have used the kde action available in the dataPreprocess action set. Below is the CASL code that computes the density estimates and saves them in a table. The input variable is ‘maxTemperature’ in the kde action. I have used the groupBy option to compute the densities for each month from January through December. The original data has records of day wise temperatures. Hence, we will need to create a derived variable to extract the month so we can use it for computing the densities for each month. As shown in the code snippet below, the variable ‘MONTH’ is derived from the dates provided in the original data that is subsequently used in the groupBy option in CASL code. For this post, I have used this method.

Method 2 – Using SAS 9: Alternatively, you can also compute the densities using the KDE procedure. The BY statement allows you calculate the densities for each month. You can save them out in a SAS dataset for further use.

Step 2: I have used a data step program to re-scale the computed densities so I can stack them up on a common Y-axis. The trick is to loop over a dummy numeric group variable (mapped to the original group) and to increment the densities for each iteration of the loop. The increment value is appropriated based on the maximum density value and the value of dummy group variable.

Step 3: I have used reference lines on the Y-axis to create boundaries for each month in the plot. They are labeled by the name of the month at the start of the line towards the left.

Step 4: Subsequently, I have merged all derived variables and computations into a single dataset that can be used for plotting. I wrapped up all the pieces together in a SAS macro program. This makes it easier to create a ‘ready-to-use' dataset the next time around for a different raw dataset.

Step 5: The plot statements BAND, SERIES and REFLINE are used in the SGPLOT procedure to create the plot. The SERIES plot displays the density curve while BAND is used to fill the area under the curve. The months and the overall average temperature are created by overlaying multiple reference lines on different axes. The style attributes are managed at the plot level by providing suitable options like LINEATTRS and FILLATTRS on the necessary statements. 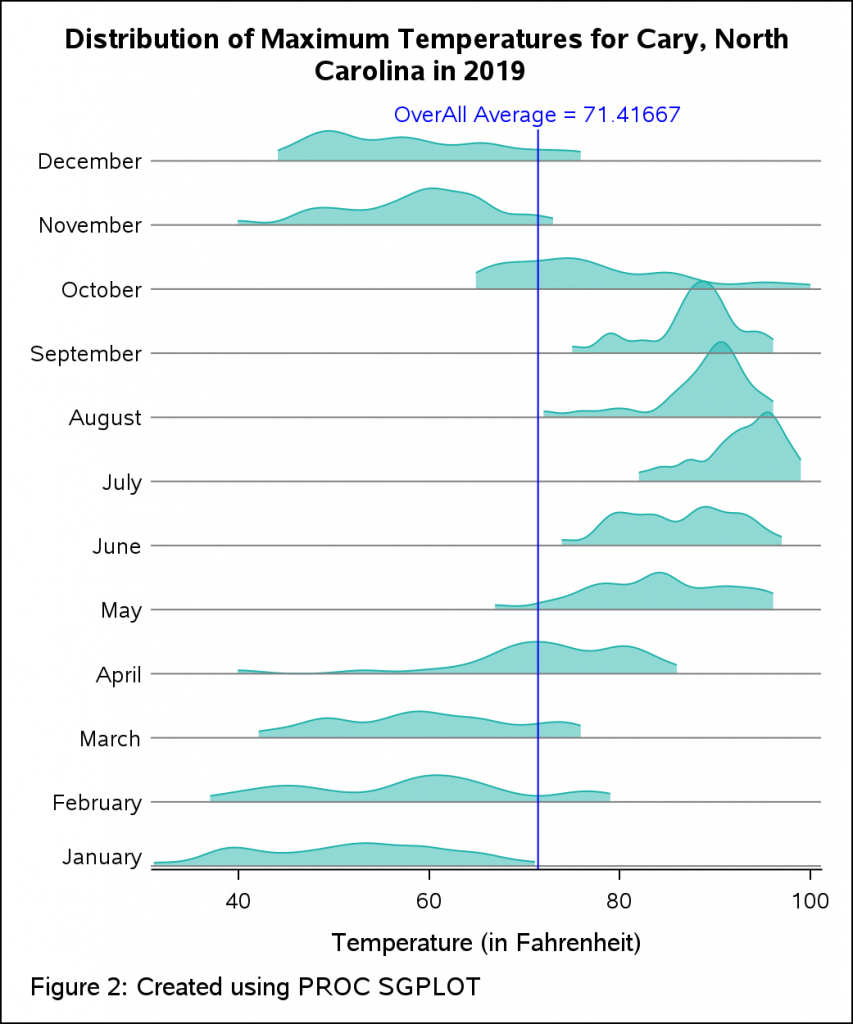 Tweaking the Plot for Multiple Measures

Early in the article (in Figure 1), we looked at the partial raw dataset. Notice that we also have the measure ‘minTemperature’ in the dataset. Let us see if we can tweak the current visualization and create density plots for two measures – maxTemperature and minTemperature across different months. This can help to compare both minimum and maximum temperatures within the same visualization. To prepare the dataset considering both measures, we will invoke the SAS macro for each measure. This will give us output datasets that we can merge and then use for plotting.

For plotting the densities for both measures, I have used SGPLOT with multiple plot statements. SGPLOT supports overlaying of compatible plots. To plot the temperatures, I have used two scatter plots for each measure. I have specified multiple band statements to shade the areas for both measures. I have mapped the BAND and SERIES plots for minimum temperature on the secondary (Y2) axis to manage the alignment of the plot. I have also requested a custom graph legend which makes it easier to distinguish the measures. For plotting the legend, I have used the KEYLEGEND statement with options to control its behavior. Since there may be overlapping regions in the plot, I have used the TRANSPARENCY option. 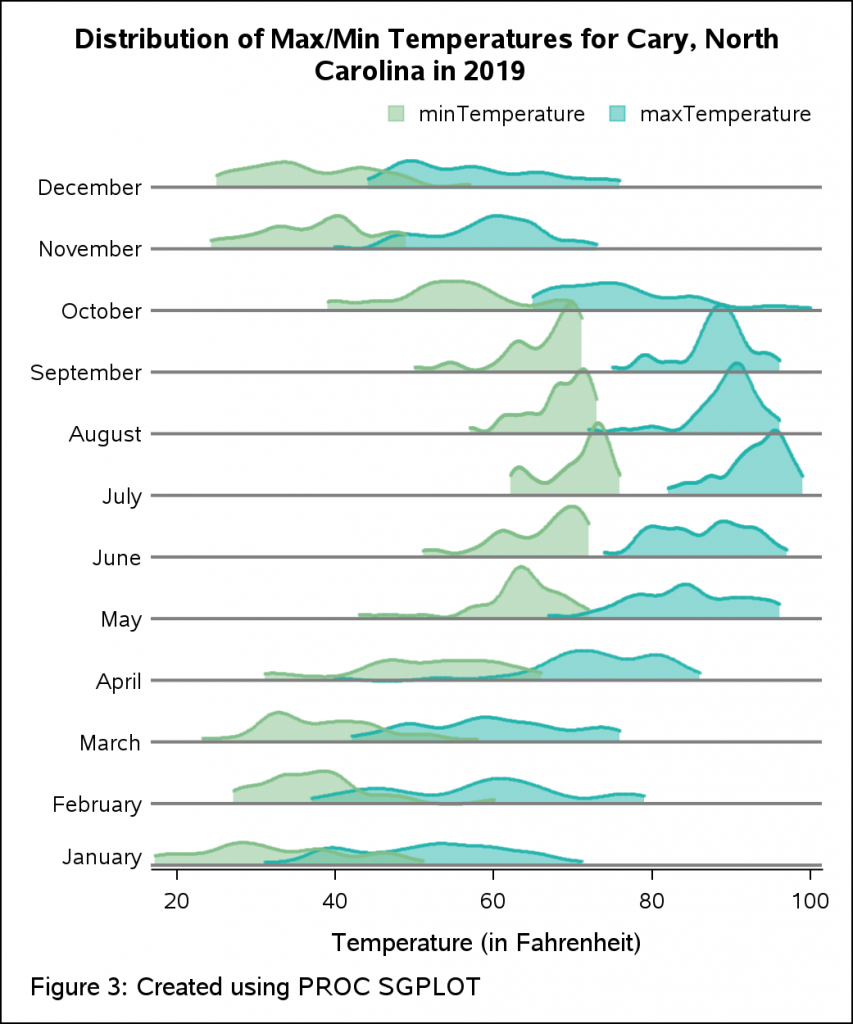 If you are interested in the full code, you can find it here.

Debpriya Sarkar has been a SAS user for more than 14 years. He works in the area of ODS Graphics and is interested in data visualization and statistics.