You can use Unicode to display special characters in SAS output including tables and graphs. When you control the graph yourself, as when you use PROC SGPLOT, you have complete control over specifying Unicode characters. When you are using analytical procedures, such as procedures in SAS/STAT, you are limited by the way that those procedures do things. That said, there are numerous ways that you can customize the default graphs. I have written about them extensively since the early days of ODS Graphics. This post is my latest installment. It shows how to get the Unicode characters where you want them, and it shows a number of other tricks along the way. First, let's see what the issue is. The following steps create a table of parameter estimates and a fit plot.

My goal is to display female and male symbols instead of 'F' and 'M'. The table works just as you would expect. 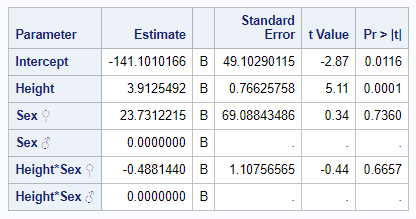 Then why does the graph legend look like this? 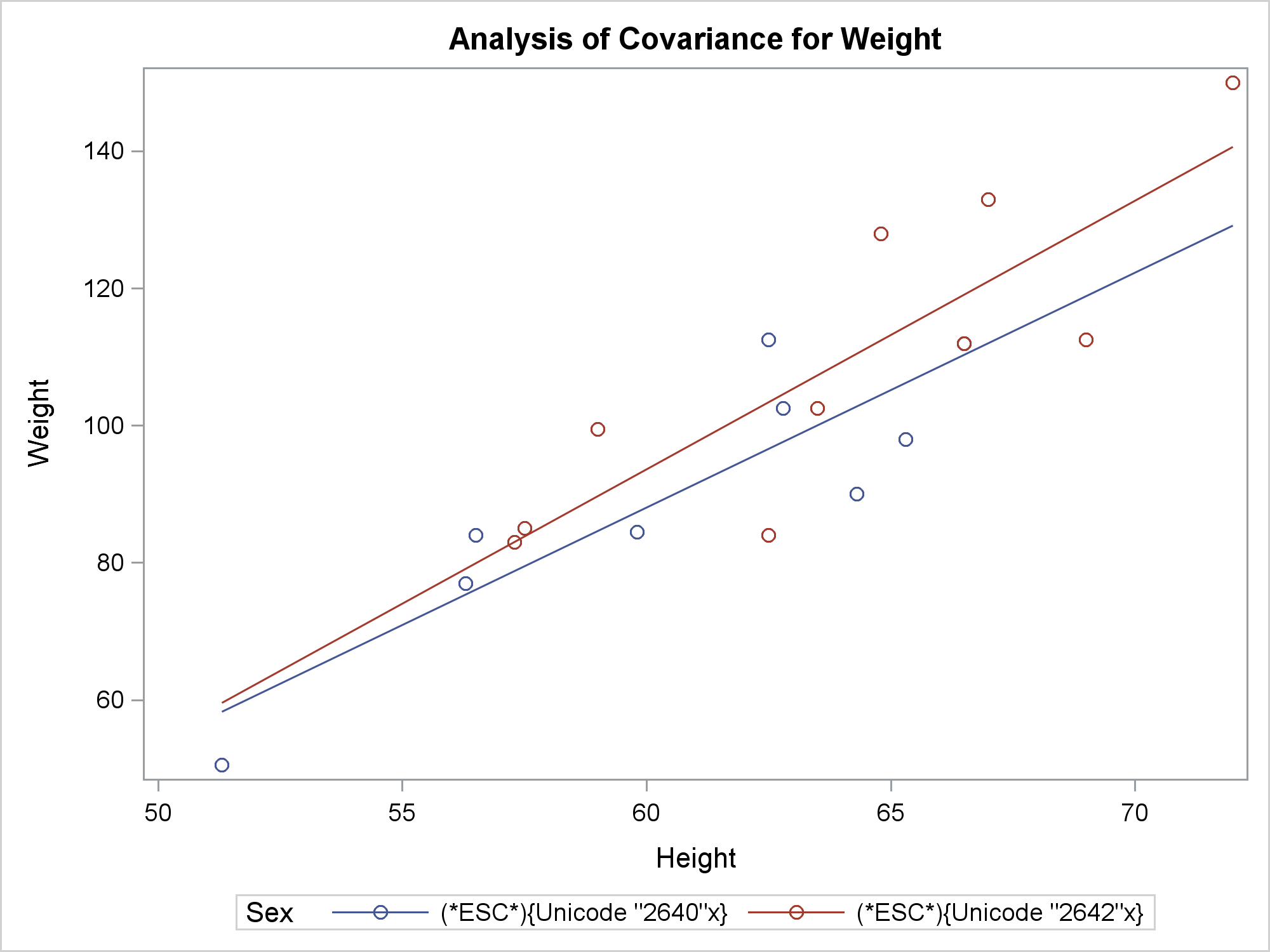 ODS Graphics needs to handle a large number of character variables and values. The developers made the decision to incur the extra overhead of Unicode only in limited situations, namely in values of variables that have user-defined formats. If we are going to see the Unicode characters, then we will need to modify the underlying data object to user formats. I will begin by enabling trace output so that I can see the object and template names.

To recreate the graph outside the procedure, you need to capture the data object and dynamic variables. You can do that by running the following step.

The ODS DOCUMENT statements open and close the ODS document. You can get the dynamic variables from the document. The ODS OUTPUT statement captures in a data set the data object that underlies the graph.

The following step recreates the group variables to have the original 'F' and 'M' values and assigns the format.

The following step lists the contents of the ODS document.

The following step uses the path, copied and pasted from the previous step's output, to create an output data set that contains the names and values of all of the dynamic variables.

The following step uses CALL EXECUTE to generate a PROC SGRENDER step that recreates the graph. It uses the template name (as shown in the trace output) and the names and values of the dynamic variables. 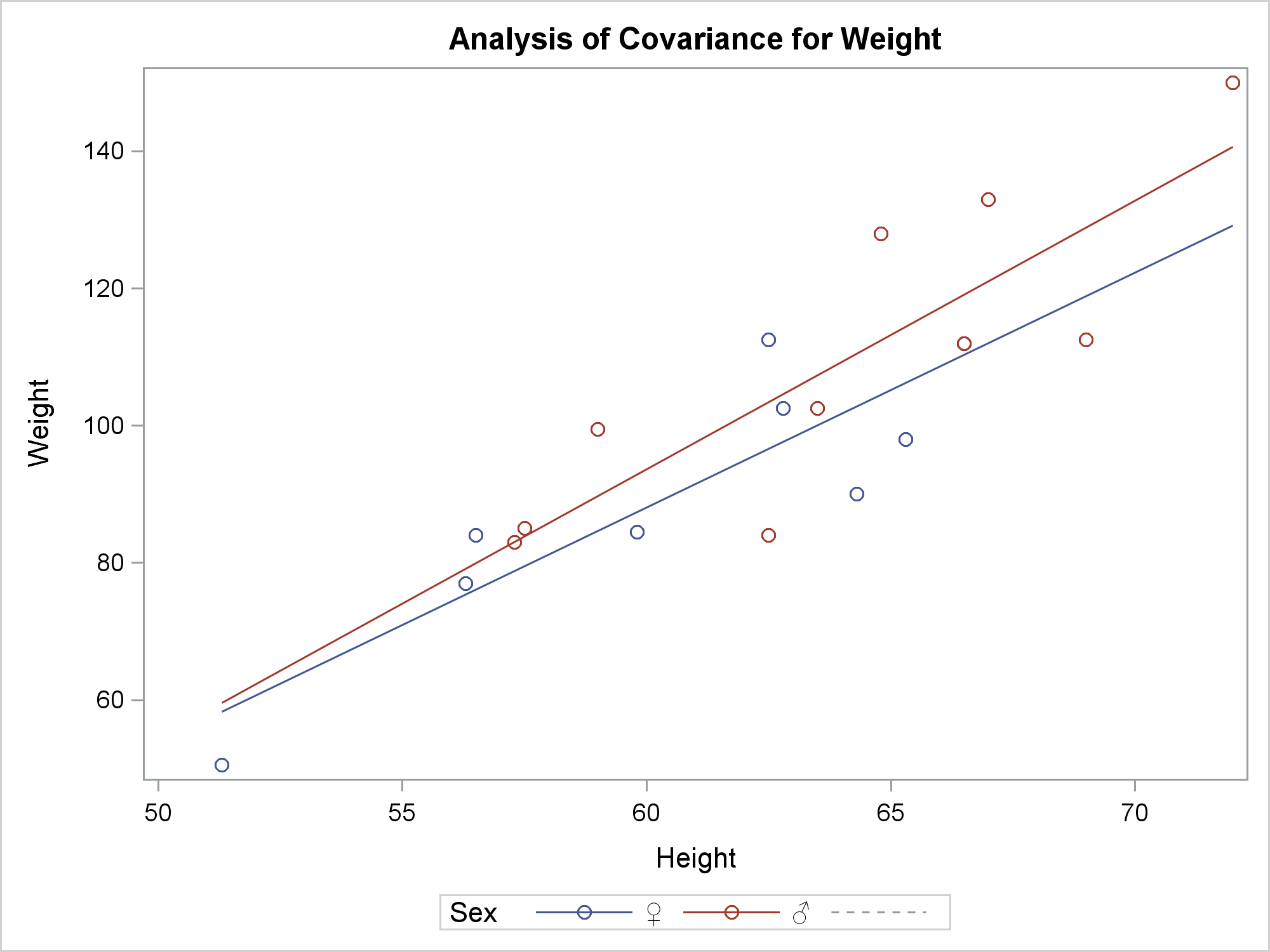 Unfortunately, we are not quite there. The legend now contains the right information, but it contains one extra entry for what it thinks is a missing group. To fix that, we will need to modify the graph template. Begin by examining the source code for the template. The first and second SOURCE statements show that there are a series of lines. The third SOURCE statement displays the actual template.

This step writes the template to a file.

I had to look at the template to see that the series plot was the primary plot. There are many ways I could have added the INCLUDEMISSINGGROUP=FALSE option to the SERIESPLOT statement. I chose to add it after the PRIMARY=TRUE option.

The last step uses the modified template to create the graph. 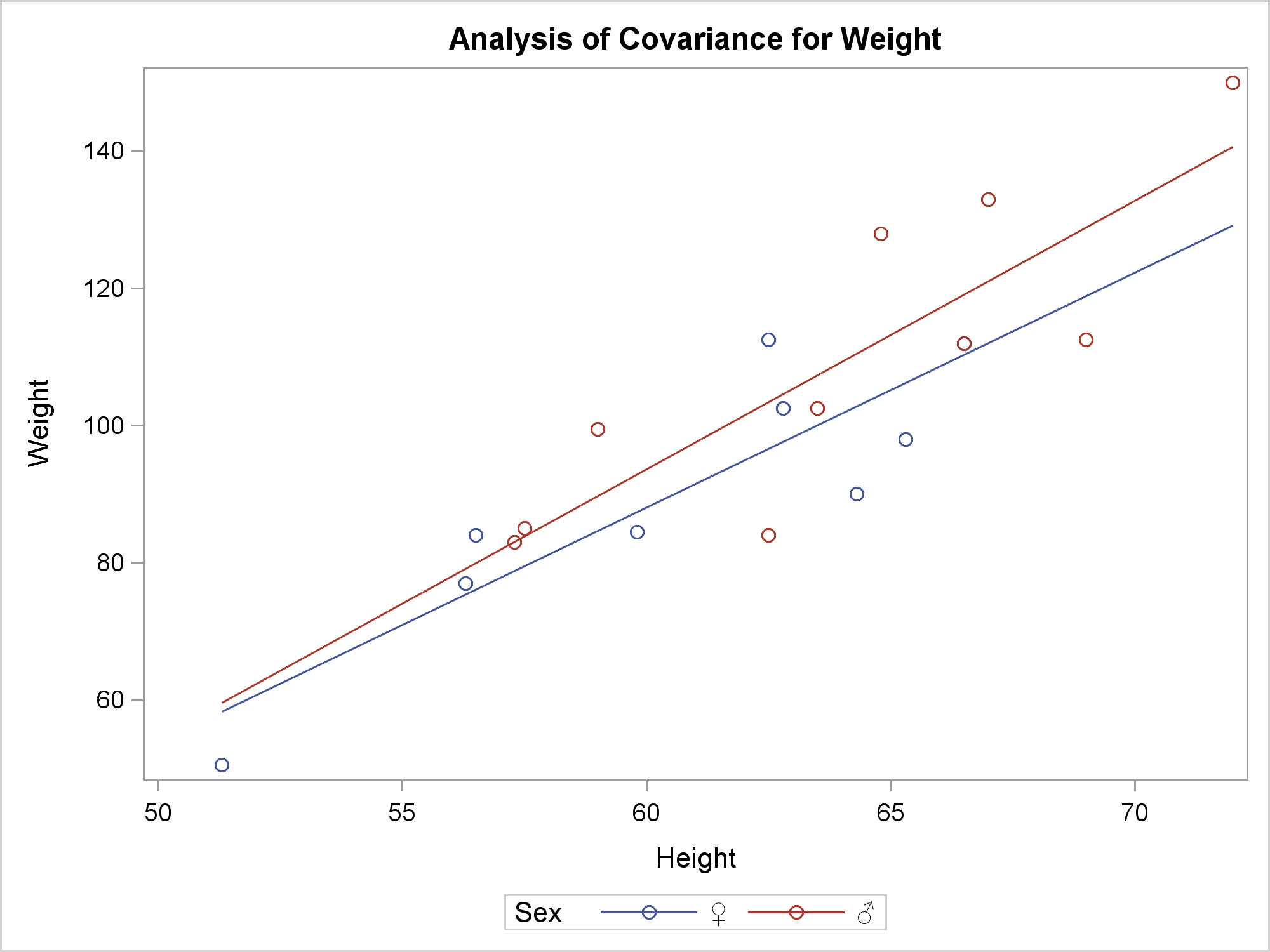 You are no doubt wondering (as I did) why I needed to add INCLUDEMISSINGGROUP=FALSE to the template when it is used with PROC SGRENDER, but I did not need to add it when the graph is created with PROC GLM. The graph has two major components: a grouped scatter plot and a grouped series plot. There are 19 observations with nonmissing values that create the scatter plot. There are four observations with nonmissing values that create the series plot. There are two additional observations that are not plotted, but they ensure that the order of the CLASS values in the scatter plot match the order in the series plot. ODS Graphics in the context of PROC GLM has dynamic variables that contain the number of observations used. PROC SGRENDER does not have them. So PROC SGRENDER sees missing values in the series plot and adds them to the legend unless you specify INCLUDEMISSINGGROUP=FALSE.

There is one more difference. PROC SGRENDER prints a number of warnings; PROC GLM does not. When an analytical procedure runs, ODS Graphics assumes that it is using a general-purpose template that could be used for a variety of situations. Undefined dynamic variables and missing columns cause statements to silently drop out. In contrast, with PROC SGRENDER, ODS Graphics assumes that it is using an ad hoc user-written template, so all mismatches between what is specified and what is used are reported in the log.

You could instead omit the legend and change the markers. The following step edits the template. It comments out the SCATTERPLOT statement and adds a TEXTPLOT statement before the ENDLAYOUT statement. The STRIP=TRUE option is critical here. The length of the formatted value is a bit ambiguous here. Is it the length of the escape and Unicode sequence or the length of a single character? The STRIP=TRUE option removes the trailing blanks before positioning the symbol so that ODS Graphics knows the length is a single character.

I cannot write code like this without first looking at the template that is stored in tpl.tpl. I wrote my code using the exact case that is in the template. I could instead use SAS functions to convert lines to lower or upper case and translate those.

The following step creates the graph. 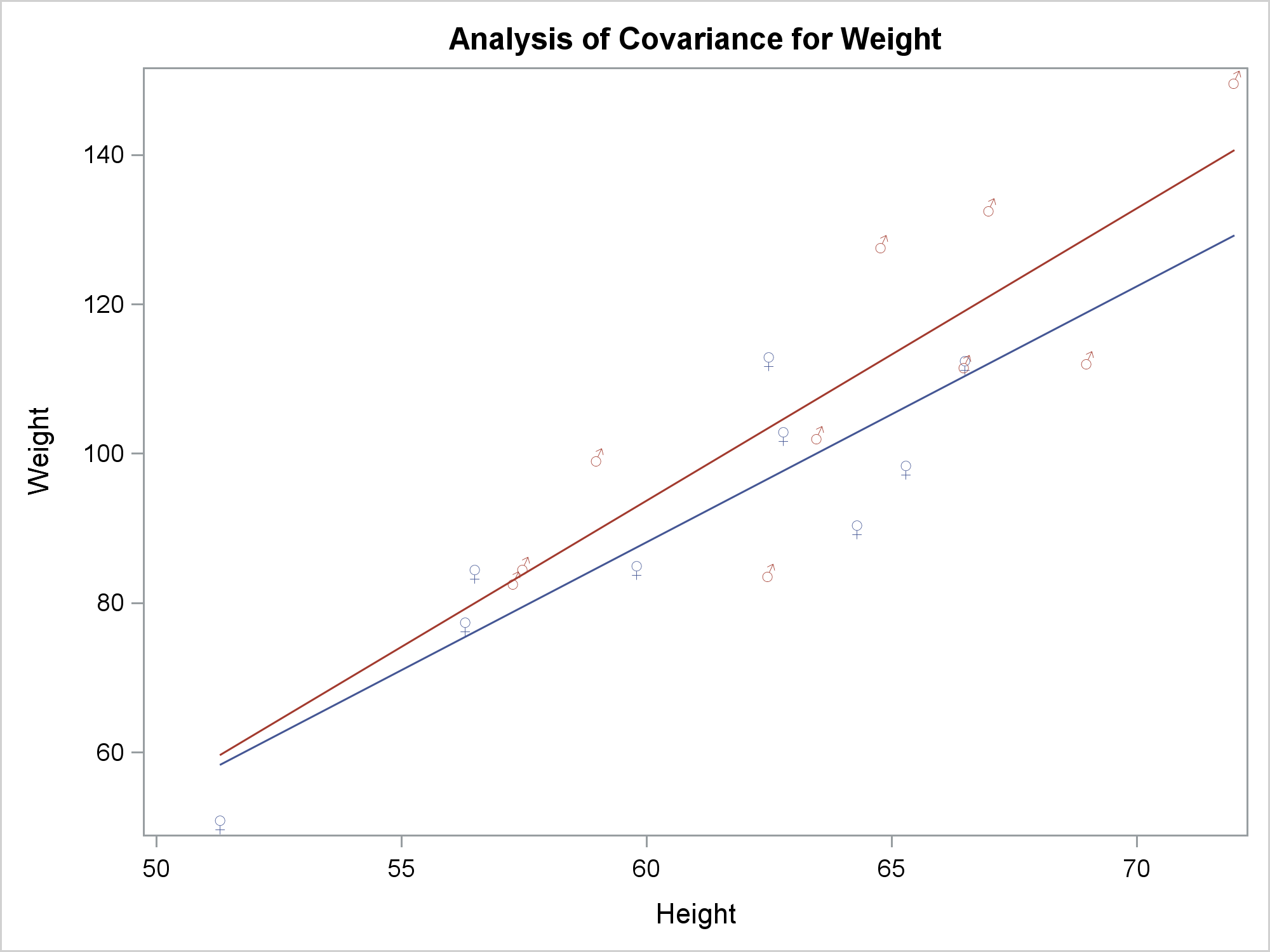 ODS Graphics gives you incredible flexibility to modify the graphs that come out of analytical procedures. Of course there are other ways you can do this. You can use the ODS output data set along with PROC SGPLOT. This would be easy for this example, but it might be harder for procedures that create a large number of dynamic variables. I like the approach of capturing the dynamic variables and programmatically modifying the template by using CALL EXECUTE. These methods enable you to create customized yet reproducible graphs.

For more on the ODS document and this type of graph customization, see my 2016 PharmaSUG paper. Rick Wicklin from the DO Loop blog provides a gentle introduction to advanced customization. I have also written about this topic extensively in other posts in Graphically Speaking.

As an exercise, what would be the easiest way to continue the customization and make the males blue and the females red or pink?