Axis tables enable you to combine tabular and graphical information into a single display. I love axis tables. My involvement with axis tables dates back over 30 years to their ancient predecessor, the table that contains an ASCII bar chart. In the mid 1980s, I created a table in PROC CORRESP consisting of 5 columns of numbers and a series of asterisks to graphically show the percentage column. In Version 7, as ODS was being developed and we supported destinations other than LISTING, this was among the last tables that the ODS team provided options to create. A few years ago, I happily replaced my ASCII bar chart table with a graph using axis tables. Since then, I have also added axis tables to replace tables with ASCII bar charts in PROC REG. Axis tables are also used in PROC LIFETEST and have numerous uses in clinical graphs. Sanjay has blogged about them often. Today, I am going to discuss some differences between axis tables in PROC SGPLOT and in the GTL. With only a little more work than writing PROC SGPLOT code, you can access some of the increased flexibility of the axis table in the GTL.

The following steps show how to make a simple graph that consists of an axis table and a scatter plot. The axis table consists of four groups of observations. Each group has a header and is separated from adjacent groups by blank lines. 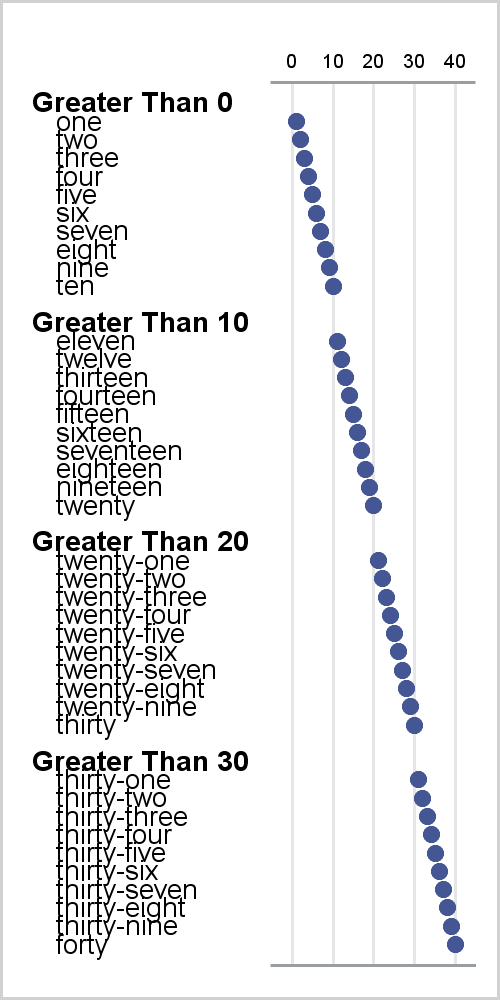 The TMPLOUT= option writes the underlying template that PROC SGPLOT creates to a file. After adding indentation, the template is as follows:

You can use it to create the same graph by submitting the template and calling PROC SGRENDER:

The PROC SGPLOT YAXISTABLE statement is as follows:

The statement in the PROC SGPLOT graph template is:

The YAXISTABLE statement requires one variable. This is the variable that is displayed in the graph. In contrast, the AXISTABLE statement in the GTL has two variables. The Y= option specifies the Y axis coordinates. By default, PROC SGPLOT sets this option in the template to specify the Y= variable from the primary plot, which in this case is the first SCATTER statement. In the GTL, you specify the Y= option before the slash. In PROC SGPLOT, you can specify this option after a slash.

This data set has a RowID variable that contains the row number. Blank lines consist of ordinary blanks and are no longer unique.

You can use a DATA step to edit the graph template. The following step changes the name to 'MyAxisTemplate', specifies weights to give both the axis table and the scatter plot 50% of the vertical space, and modifies the three Y=LINE options to specify Y=RowID.

Except for the change in width, these steps create the same graph as is shown above. By modifying the graph template, you can control the width of each panel, which gives you greater flexibility in making complicated reports.

Using a numeric row number as the Y coordinate variable in your scatter plot can make it easier to construct axis tables in PROC SGPLOT. This works well when you are not displaying Y axis tick values.