I am happy to report that my new book "Getting Started with the Graph Template Language in SAS" is now shipping.  A colleague suggest it would be useful to post some articles with the same theme  of "Getting started".  I thought that was a great idea, and decided to start a new thread of articles to help the reader who is new to GTL or SG Procedures get started with these topics.

Here is the first installment of the getting started articles with GTL.  For the first article, Let us start with the simplest of graphs that you can create using GTL, a single-cell scatter plot.  Before we get started, let us look at the minimal code structure you need to create a graph using GTL.

First of all, you need to know that creating a graph with GTL is a two-step process.

Step 1:  Define the structure of the graph using GTL in the TEMPLATE procedure.  In this step the template is compiled and saved, but no graph is created.

In the illustration above, the GTL syntax used to define the structure of the graph goes inside the BEGINGRAPH and ENDGRAPH block. The template is assigned a name in the proc TEMPLATE step which is used in the proc SGRENDER step to create the graph. 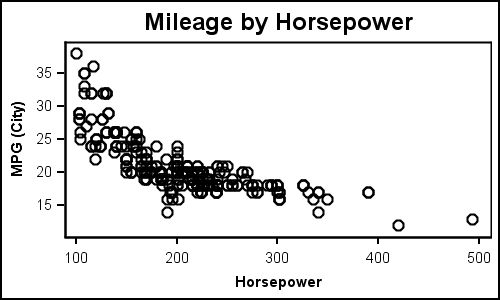 While the code seems more than what one would expect for a simple scatter plot, most of the code is "boiler-plate".  The key part of the code in the template above is the following:

Here we use the LAYOUT OVERLAY container which is the most basic container used to create all single-cell graphs.  All plot statements must go inside a layout container.  In this case, we are using just one single SCATTERPLOT statement, with no optional features at all.  Note the data set "Sedans" includes only the sedans from sashelp.cars data set.

Extending the above to create a graph with group classification is straightforward.  We use the GROUP option to get the following graph. But we also made some other changes that will demonstrate the strengths of GTL. 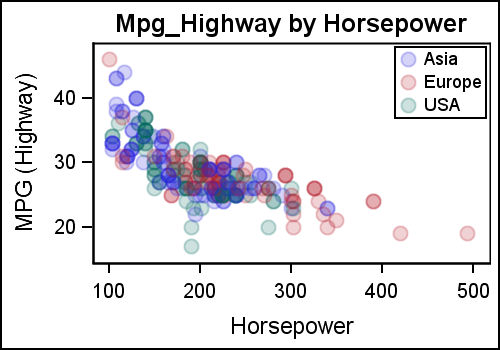 Note, in the template (name=dyn_scatter) above, we have not only added the GROUP option for the SCATTERPLOT, but we have also used dynamics to make the template more flexible.  Here are the details:

Now, using dynamics, we can use the same template to create different types of graphs as follows.

In the next example, we use the same template (dyn_scatter) to create a graph of Horsepower by MSRP with Drivetrain as group classifier.  In this graph it is better to place the interior legend at the bottom, so we have done that using the "_valign" option.

Scatter Plot of Horsepower by MSRP by Drivetrain: 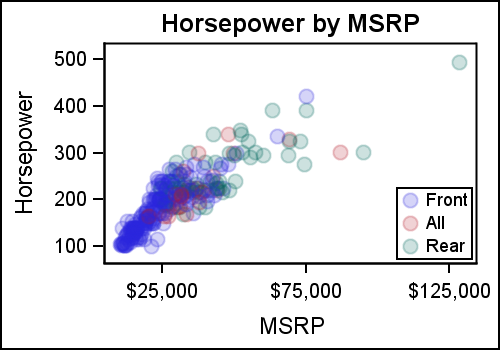 The examples above show you the power of GTL, where you can create simple graphs with ease, and also make them very robust and flexible using dynamics and conditional logic.  That's right, we also used conditional logic to draw the DISCRETELEGEND only when the "_grp" dynamic is defined.  Note, the title is also changed appropriately using the dynamic values.

This same template can also render the first scatter plot shown in this article, one without any groups.  Just leave _grp undefined, and you will get the first graph as shown in the last step in the attached program.