Red light therapy (RLT) is pretty amazing!  Although it may seem like a new technology in recent years due to more mainstream articles, it’s not.  I’ve been using it for a couple of years and have found it beneficial on many levels.  Over 25 years ago astronauts discovered that red LED light helped with photosynthesis for plants at the space station.  Based on these findings, research gravitated to investigating if these light frequencies could have an influence on human cells.  I’m glad to say that it did.  The first red light therapy helped mitigate muscle atrophy, loss of bone mass and wound healing in spaced and we’ve come a long way.

Going back to physics, energy is relative to frequency and the wavelength of light is measured in nanometers (nm) which is the distance between the crests of the waves.  Humans, with the human eye, can perceive between 380 and ~780nm.  We're talking RLT but wanted to mention (since it's also in saunas, etc.) that red light has a similar impact on the body as infrared light  and it’s readily used in the functional health world.  Both red and infrared light share some benefits such as increased energy production in every body cell (which is increased adenosine triphosphate – ATP).  What differs between the two is that the energy from red light is absorbed by the skin up to a depth of 25 mm, whereas infrared light can penetrate deeper. The same is true of light from the sun, which among all its light spectrums, contains red wavelengths which are beneficial to health.

A little biology….cells that make up human tissues are made up of many organelles that have specific functions 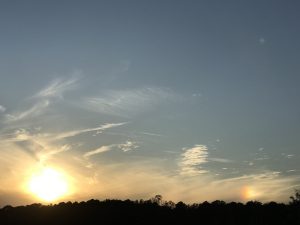 such as the mitochondria.  These cell powerhouses are responsible for producing energy from glucose and can absorb energy from light.  More specifically, they’re able to drink in red light with wavelengths between 600 and 1000 nm. Without going into too much detail, because of this process nitric oxide is released allowing the mitochondria to use oxygen and continue to produce energy. On the other side of the coin, if the above process doesn’t occur, cellular stress can happen and the stress hormone, cortisol, can be part of the picture.  With red light therapy, the opposite situation can take place and involves an improvement in cellular fluid structure and better ion exchange.

Let’s look at other benefits of red light therapy. 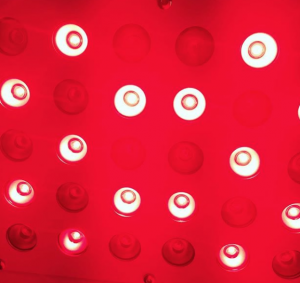 More research is being conducted as this blog is published and we’ll continue to see additional peer-reviewed literature evolve.  You can purchase RLT in large panels, over the door units, hand-held and more.  Within the spectrum of 600-1300 nm, it can stimulate skin cells and even assist with wound and tissue healing due to promoting blood production.

This is a promising therapy and I’ve enjoyed the benefits myself and have friends who say the same.  In fact, a friend’s pup had an injured leg and underwent weekly sessions to assist with inflammation and pain.  Now the dog is only daily walks and doing well.  It’s not just for humans.  Some veterinarians use this modality on pets. It’s a safe technique.  If you’re interested in trying it out, find a wellness facility who offers the service or purchase from a company that is reputable as there are replicas out there whose standards might not be as reliable.  Check the reviews and do your homework.  Enjoy the benefits of light!

Celeste has been in the science, health and wellness field over twenty-five years. She began as a research chemist with a concentration in genetics and nutritional biochemistry. After working in the medical field, she saw the need to follow a path of proactive wellness and prevention. After receiving her Masters in Health Education, she ventured into the mind/body world receiving training in Mindfulness-Based Stress Reduction and Yoga. Shortly after, she received the 2003 Wellness in the Workplace Award for a large health system in the state of Virginia. In 2004, Celeste joined SAS Institute, Inc. and continues to be passionate in her position overseeing Wellness and Fitness. She believes curiosity and collaboration bring insight and new ideas which bring out the best in everyone from team members to those who are making healthy lifestyle changes. Believing that the body knows how to heal if given the proper tools, Celeste earned certifications in Aromatherapy and Essential Oils, Classical Chinese Medicine and Homeopathic & Naturopathic Medicine. She earned her Doctor of Naturopathy degree in 2020. Celeste is a published author and practices what she preaches and teaches. She is a nationally recognized Master Certified Health Education Specialist (MCHES) and has advanced certificates in Integrative and Functional Nutrition, Genetics and Genomics. She is an Experienced Registered Yoga Teacher (E-RYT) with the National Yoga Alliance, Mindfulness-Based Stress Reduction (MBSR) Instructor, Functional Medicine Certified Health Coach (FMCHC) and Certified Yoga Therapist (CYT). Follow @ccooperpeel on Instagram.