The opportunity is to create great value by realizing the innovative power of technology, and doing it requires agility, resourcefulness and a willingness to collaborate like never before.  The interesting part is that each of those three factors rely heavily on people skills. 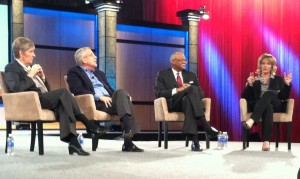 These themes emerged among the topics covered by the keynote panel at SAS Global Forum Executive Conference and it struck me how much they also resonate in marketing.  The panel was moderated by SAS Vice President of Best Practices Jill Dyché and included these executives:

Jill set up the discussion with the idea that “we’re still victims of the cultural paradigms at our companies” – and she cited examples to underscore her point. There are legacy mind-sets and processes that need to be changed before the possibilities can take place, and that’s why the catalysts are the people skills. It’s natural to have a viewpoint informed by past experience, and getting beyond those predispositions takes work. It’s not too different than going to a family reunion or when visiting your home town – it may take some adjusting for your old neighbors to see beyond your teenage years’ antics and engage with you as the adult you’ve become. Showing up with your wife and kids helps that process, but it still takes time.

Overcoming Legacy Mindets
Peter noted the legacy mindset that evolved because IT has traditionally had control over what happened and why – largely in siloes. Now, we have consumer-driven collaboration and related applications that are impacting the way things are happening.  His point was that the only way to drive technology-driven innovation is to seamlessly connect customers and employees back to your systems of record (CRM, ERP, etc), and it’s actually more accurate to consider them “systems of engagement.” Not making those connections, of course, means potentially forgoing the opportunity to drive the engagement.

The corollary in marketing is the heritage of push-marketing and campaigns that make it seem like you’re always broadcasting and not listening. Customers want something different nowadays and they want to engage with your organization on their terms – and listening is not optional. Opt-outs and do-not-call-lists are proof positive that marketers not only have to be sure their message is relevant, but so are timing, channel and even medium. Think of how frustrating it is to get an offer via email on your smartphone and then be taken to a non-mobile friendly page.

Attitude and Approach Matter
Attitude and approach also have a big impact. Mary, whose current role as CEO of Canadian Tire includes both IT and marketing, has visibility to both sides. Her view is that if IT comes to the table thinking that they’re just accountable for getting things done and if they don’t see that they can bring the future to fruition, that’s a problem.  Another big issue is language – not having a common language is an impediment.  Coming together to identify common challenges is very important, especially when it’s clear how each party brings a critical piece of the puzzle to the solution.

Find a Common Language
A recurring theme throughout the discussion involved language and perspective. Jill noted that she still has occasions when talking with IT executives that they are referring to their business counterparts as “they,” invoking the classic “us versus them” point of view.  Language also comes to bear in standardization initiatives, which often happen on an enterprisewide basis. Those can be especially threatening because standardizing can often be seen as involving some degree of giving up control. So when peoples’ accountability doesn’t change accordingly, the threat can seem quite real. James noted that it’s often best to start by simply agreeing on definitions to frame the discussion with everyone having the same understanding. Process changes and standardization in marketing are happening increasingly with IT at the same table, so this idea of needing a common language has never been more critical.

Get a New Perspective
A change in perspective can be transformative. James shared that one of the most impactful things for him as a CIO was an invitation from one of business counterparts.  A major business unit head took him on a sales call, during which he got insights into the customer he would never have gotten in a conference room. And those revelations gave him valuable common ground with his business counterparts that evolved into a very productive partnership.

And sometimes a major technology initiative can spring forth quite far from headquarters, which is a whole different take on perspective.  That was the case when FedEx gave its drivers hand-held scanners a decade or so ago. Back then, it was a competitive advantage that was initiated in their field operations in response to service issues.  Today it’s table stakes for any package handling operation. The changes driven by shifting customer behaviors and needs are happening quickly, and collaboration is increasingly needed to realize the potential of technology to address those needs.

Reinvention – the Ultimate in Adaptability
Jill cited a recent ComputerWorld article that spoke to the thought that the best IT leaders reinvent themselves, which led to James sharing his experiences in reinventing himself. In most companies where he supported the business from an IT standpoint, he wound up running the business. And that had to do with how he reinvented himself – which he’s done in 3 ways at different times:

And related to critical thinking is getting the right perspective when faced with big data. The more data you have, the more noise you’ll have so you need to know how to tune out the noise. And it also helps to remember that data is objective and interpretation is subjective. Someone will be interpreting that data, and it’s critical to understand the thinking that went into the models that are built to deliver the insights needed to make informed decisions. By knowing the underlying thought processes, you know the key levers that the company needs to be successful and how to pull those levers.

And knowing the right levers and how to marshal resources across organizational lines to respond to technology changes are what it takes for executives to drive innovation. Finding a common language is a stepping-stone to finding common ground for collaboration. And changes in attitudes and perspectives will go a long way toward leaving legacy mindsets behind to enable customer-centered strategies that add lasting value. We’re all facing technology changes – and we should all consider how they are affecting how we operate, and what the changes we need to be a part of making.

Or as James observed in a closing thought:

Most leaders don’t fail at the “what to do” question – it’s usually “how we do it” that trips people up.