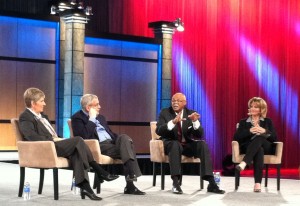 James Dallas speaking on a panel with Peter Moore and Mary Turner, moderated by Jill Dyche.

Adversarial relationships make for wonderful stories. Why? Because we can relate to them so well. It’s human nature to clash with rivals - cat fights, turf wars, even sibling rivalries reliably sell magazines and fill cinemas and theaters. But are they good for business?

Of course not, especially not if the adversaries have the same logo on their paychecks. The traditional relationship between IT and marketing has been more adversarial than not – especially considering the differences in mind-set, focus and even language spoken by the two enterprise functions. Thankfully that’s changing.

Many of the same dynamics changing IT are also changing marketing and it’s driving the need for those two functions to work together. The role of big data in driving that developing partnership was pretty well described in CMO Council research sponsored by SAS, Big Data’s Biggest Role – Aligning the CMO and CIO.

That evolving partnership was also validated on a panel discussion moderated by Jill Dyché at this year’s SAS Global Forum Executive Conference. Jill posed the question to panelist James Dallas, former CIO at Medtronic Corporation, “How is IT Changing.” Much of the answer he gave could very well apply to the question, “How is Marketing Changing." Here is what he said:

There are three major trends that are transforming IT as we know it:

So if you’re a CIO and you’re dealing with these three trends, you’re having more “reflective moments,” which he clarified rather humorously as “that’s when you look at the computer screen or you’re in a meeting and you have that blank look on your face. And that’s when every other word is ‘damn.’ So as a CIO, how do you go from the controlling side, to now not being fully in control?”

In those same veins, the marketer is dealing with “empowered customers” that engage with the organization across multiple channels and have an expectation that any one of the company touchpoints have a full view of their profile and history. At the same time, positioning and brand conversations are increasingly being influenced by customers.

In the end, marketing has become more technology-driven and IT priorities are increasingly being driven by marketing’s need to orchestrate customer interactions across departments and often in real-time. There’s never been a better time for IT to speak the language of marketing and vice-versa. More on that in another post.

Thank you for following!