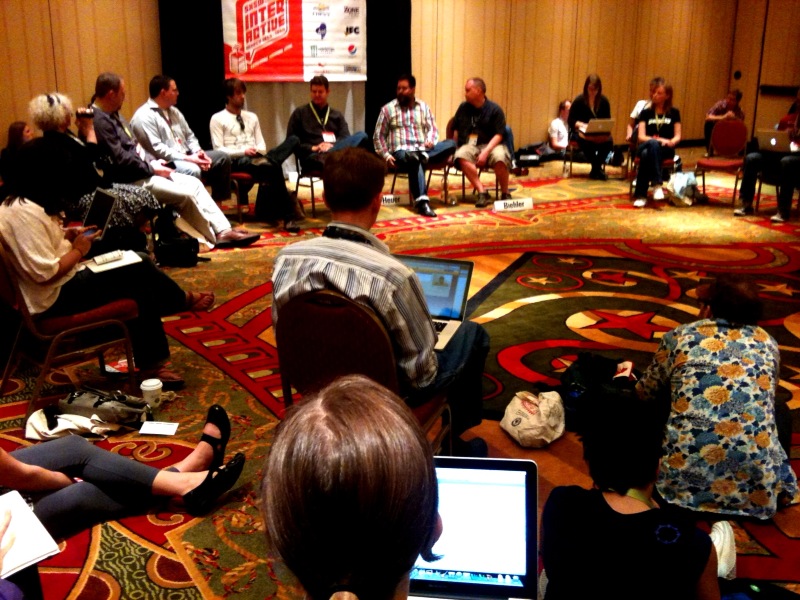 I arrived in Austin mid-afternoon and got to the convention center in time for the first session on my list, "Do Cool Kids Leave When the Suits Arrive?" The discussion was led by John Biehler and Chris Heuer.

I arrived a bit late for this session, having experienced what I'm sure is a persistent SXSW phenomenon: one session I went to wasn't what I thought it was going to be, and the next session on my list was standing room only, with a waiting line. Seriously. And bouncers. Well, pleasant young volunteers in t-shirts, but you get the idea.

When I entered the room, the discussion had turned to corporate social media policies.

People are still very concerned with the idea of how you maintain your personal identity while interacting with co-workers, customers and prospects. Even here, at what I would assume to be the cutting edge, there was still a healthy debate.

The discussion was fairly nuanced, but most of the people who spoke out seemed to understand the dichotomy between being personal and genuine, and representing your company in a professional manner.

One participant took the positions that if you friend your customers and clients, you've lost the right to say anything you want. That position sounds repressive to a lot of people. Others seem to accept it immediately. I decided when I first began communicating with people on the Internet that I would never say anything online that I wouldn't say to someone's face, and I've never regretted that.

In the SAS social media guidelines and recommendations, we suggest that people use good judgment in social media and consider how they use their channels. If you're communicating with customers and prospects through your Twitter or Facebook account, look at what you're sharing and how it reflects on the company. If you wouldn't say it face-to-face to a customer you've met for the first time, you probably shouldn't say it in social media.

That doesn't mean you can't show your own creativity and personality; it means avoid topics and language that would make someone uncomfortable. In a sense it's just politeness.

Beyond that, it's increasingly important for corporate social media practitioners to understand Facebook privacy settings. You can create groups for professional contacts, friends, family, etc. and decide what you share with those groups. And if you find that you're primarily talking about basketball or macrame or politics on Twitter, considering separate Twitter streams for personal and professional.

Of course, it's always a fine line between sharing too much and being a boring corporate drone. As much as people want it, there's no good formula. You have to understand your community.

One participant made a point that I found especially applicable to corporate social media evangelists. If you want to affect change in your organization, you have to "sell out" a little bit. Understand what the objections are, address them and work to promote a sense of internal comfort with social media.

As anyone who's ever tried to change a corporate mindset knows, that approach will be much more effective in the long run than stridently demanding change for change's sake.