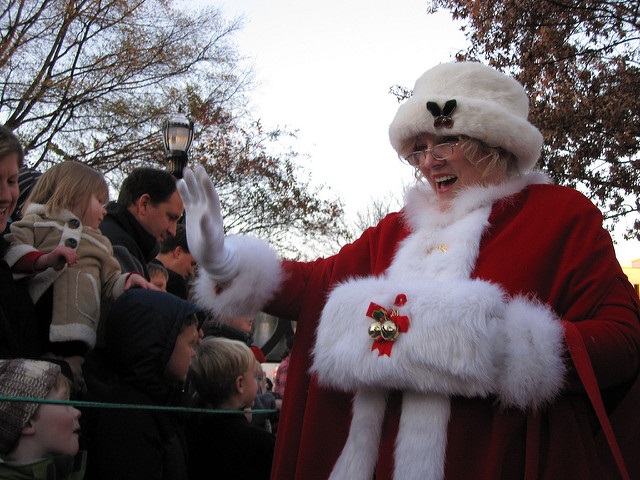 I recently met Mrs. Claus at the INFORMS Annual Meeting, where we got to talking about the social network analysis session she’d just attended. It turns out Mrs. Claus and I are both fans of a book by Alex Pentland, Social Physics: How Social Networks Can Make Us Smarter. Apparently years ago she had foreseen the trend toward analytics and returned to school for dual PhDs in Computer Science and Statistics at Stanford. She now carries the title of Chief Data Scientist of Santa’s Workshop. Who knew? We chatted about the many ways she and her team at Santa’s Workshop use social network analysis, some of which were commonly employed but others were surprising adaptations. 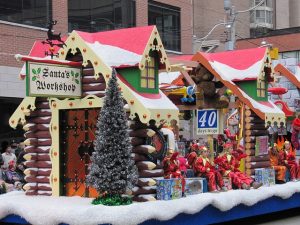 Santa’s Workshop first started using social network analysis to uncover fraud. While naughty children exist (which requires predicting coal delivery, but that’s another post), the perpetrators Santa is after are adults. I bet you didn’t know that some households pretend to have young children by leaving out notes for Santa, even if they have no children at all or their children are grown and have left home. The challenge with finding fraudsters is not in seeing a pattern, because fraud is by definition a rare event, but in making meaningful connections between disparate data activities that may help spot fraud.

Social network analysis allows investigators to look at lots of data from multiple sources at the level of a network, where they can see different people (nodes) and their relationships (ties) in the form of a graph. The connections between people may not exist at the transactional level but jump out when viewed graphically in network form. Just like how the Los Angeles County Department of Public Social Services uses social network analysis to quickly identify potential co-conspirators in fraud rings, Santa’s Workshop uses social network analysis to find the bad guys. Mrs. Claus has uncovered several fraud rings using this analysis way and stopped delivery of presents to those homes.

Telecom companies are not the only ones to worry about churn. Santa’s Workshop also has to worry about this problem, which arises when children stop believing in Santa Claus and cancel their “Santa service” prematurely. You may think this transition of beliefs is an isolated event that is just a natural function of age, but Mrs. Claus uses the SAS® Enterprise Miner™ Link Analysis node (link analysis is a popular form of social network analysis) to uncover notable connections among parents, siblings, and schools that suggest the possibility of churn. They look at cell phone call records and social media connections to understand relationships, and then use targeted interventions to offer parents tools to allow children to continue to believe.

Drawing on Pentland’s research they have applied careful use of social network incentives to encourage older children not to tell their younger siblings or other children in the neighborhood. Pentland’s lab has found that this kind of positive social pressure is best applied to people in the target’s network rather than directly to the target. For Santa this means offering incentives to the older, respected friends of children at risk of “explaining” Santa to their younger siblings rather than to the older siblings themselves. Pentland’s research shows that this kind of nudge is far more effective than standard economic incentives, because it recognizes that we are social actors strongly influenced by our social ties. Mrs. Claus and team have also found that children at risk of churning held onto their beliefs longer when they received special mail messages from Santa himself. 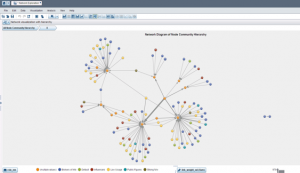 Using social network analysis to detect fraud and churn are common use cases, but what really intrigued me was how Santa’s Workshop uses social network analysis to generate ideas for presents by improving idea flow among the elves. You may have thought that Santa is only an order taker, but consider the challenge he faces when a child asks for something that simply is infeasible (pony requests in New York City, for example). So each year he must conceive of, design, and produce items that may not have been requested but are likely to please. Product Manager Elves are responsible for finding ideas for these gifts and delivering product specifications to the Manufacturing Elves.

Research shows that the best way to stimulate idea flow is to increase both exploration and engagement. Early in the year Product Manager Elves travel around (incognito, of course) to hunt for ideas. The Product Manager Elves most consistently successful at generating creative product ideas are those Pentland labels explorers. You know these kind of people – they are the ones who know lots of different kinds of people, love talking ideas with them, and then sharing those ideas they’ve just gathered in subsequent conversations. As Pentland describes, their focus is not “the ‘best’ people or ‘best’ ideas….but “people with different views and different ideas.” They then filter the best ideas by learning which ones generate the most traction in their subsequent conversations with others.

The other key to idea flow is engagement, which is when new ideas are shared among teams. The best ideas the Product Manager Elves discover go nowhere if they aren’t adopted and championed by other Elves. So drawing upon an example in Pentland’s book about improvement in idea flow at a call center, Mrs. Claus scheduled a common lunch hour, so everyone breaks at the same time to eat. Previously they didn’t want to bring down the line, so lunch was at various times, but they’ve learned that when all those Elves from different departments circulate at lunch they share ideas. Those ideas that stick are the ones the whole teams get excited about and start contributing to design specs, beginning to see these ideas as those belonging to Santa’s Workshop and not just the Product Manager Elf who discovered them initially. Plus, this seems to have helped in Elf retention, because all of them feel part of the entire process.

What does Mrs. Claus have on her 2017 data science horizon? She’s been exploring the use of sociometric badges that Pentland first employed in his research. Commonly known as sociometers, these are small electronic wearable devices that collect data on people’s interactions (face-to-face time, conversation, gestures, physical proximity, etc.). Pentland’s devices are the size of thick badges, but Santa’s Workshop has developed tiny ones they can surreptitiously place on toys to track similar behavior, with the added element of serving as gateways, so they can analyze the data in real-time. She hopes to make tweaks to gift-giving in 2017 as Santa travels around the world, drawing upon the initial reactions of children to new gifts.

I was glad to meet Mrs. Claus, another fan of Pentland’s book, Social Physics, because it is full of interesting ideas. I’m clearly an explorer, because when I read a book like this I want to discuss it with other people, hear their reactions, and learn new things. Later chapters talk about how the concepts of social physics can lead to smarter cities and even smarter societies. To ensure that the kind of data collected is used ethically Pentland even proposes a New Deal on Data. I'm encouraged by research like this that can be applied as part of the growing #data4good movement. So lots of good stuff here! If any of you have read this book please chime in and let me know what caught your attention.