Any time congressional districts are redrawn, that tends to be a controversial endeavor and the term gerrymandering (manipulate the boundaries of so as to favor one party or class) comes up. Favoring a certain political party is referred to as partisan gerrymandering. Here are the NC congressional maps created in 2002, 2011, and 2016 - each of these maps has been accused of gerrymandering in one form or another. If you'd like to learn more about these past maps, here's a link to a nice article I recommend.

As a GraphGuy, I notice several problems in the maps above (aside from the gerrymandering, which is beyond the scope of me 'fixing' it). Here are the main problems I notice.

It's poor form to complain about a map without trying to create a better one, therefore I set out to do just that. First I had to find the boundaries of the districts. I did a bit of Google searching, and found that I could download the shapefile for all the US congressional districts from the data.gov page. I used Proc MapImport to import the shapefile into SAS, and then generated a simple scatter plot (below). The map included a few non-state areas (which will be easy enough to get rid of when I subset our NC), and I was pleased to see that the coordinates are in unprojected latitude/longitude degrees (that way I don't have to worry about unprojecting the coordinates). 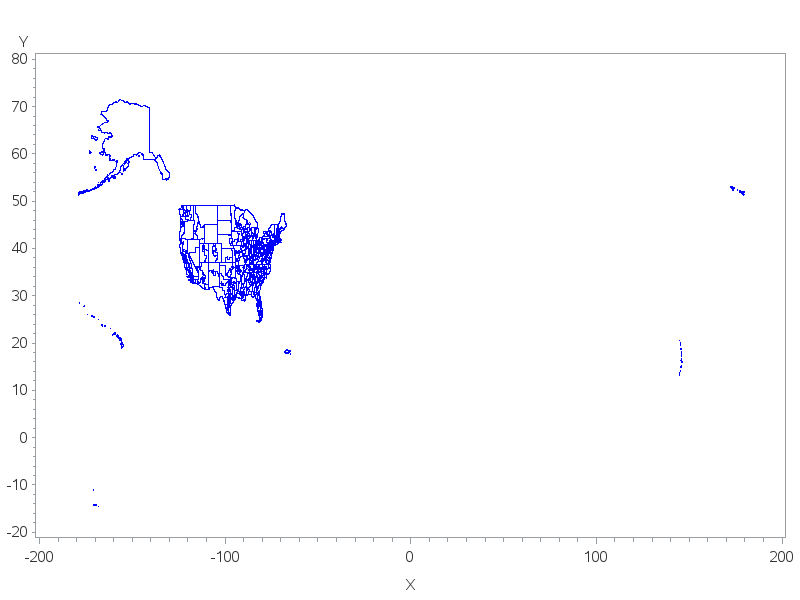 I used a data step and a where clause to get just the congressional districts in NC, projected the subset, and then used Proc GMap to plot the polygons. I didn't really like the colors used in the maps above, therefore I used the colors from this other version I found in a news article - they're a little brighter and easier to distinguish. Here's my first/simple map - it's a bit too simple, but a good starting point.

But alas, since the county and cd borders are often in the exact same location (which is one of the goals of defining good districts), the light gray county border layer often obscures the darker cd borders in the map. This is not the effect I was striving for!

Therefore I added another layer - this time annotating the cd borders on top of the county borders. Now you can see the light gray county borders (for reference), and but the major visual emphasis is on the darker cd borders.

Now let's work on that legend! ... With 13 items in the legend, it's very difficult to match up all the colors and shaded in the legend, with the colors and shades in the map. Therefore I decided to get rid of the legend, and label the districts (like they did in the original maps). I thought about using the %centroid macro to determine the positions for the labels, but I decided to take total control and place the labels at specific lat/long coordinates of my choosing. I added these labels as another layer in the map, using the annotate label function. I also moved the title text to the space formerly occupied by the legend, to make better use of the empty space, and I think the title looks better there than at the top of the map.

Since I grew up in NC, I'm familiar with the shapes of several counties - but not all 100 of them. Therefore I needed a few more reference points to help me better understand what areas were (and weren't) in these congressional districts. Therefore I added one more layer - cities! I created a list of the larger cities I thought people might recognize, and then looked up the lat/long coordinates in the mapsgfk.uscity dataset. I projected them using the same parameters as were used to project the map, and then created an annotate layer to annotate the city name and a dot/pie marker. I admit, these city labels do make the map look a little more cluttered - but it's useful clutter.

What other ideas have you got, for an improved version of the congressional district map?