When I'm at a social gathering, someone always asks what type of work I do. I like to keep my social life separate from my work, therefore I usually give a vague answer such as "software" (and quickly change the topic). How vague or specific is your response? How vague or specific is the data the US government keeps about jobs? And ... what are the most common occupations in each state?

I recently saw an NPR article on this topic, and they had a neat map showing the most common job in each state. Their map had a slider you could move to change the year, and a 'play' button you could click to animate the map. Click the screen capture below, to see their interactive version: 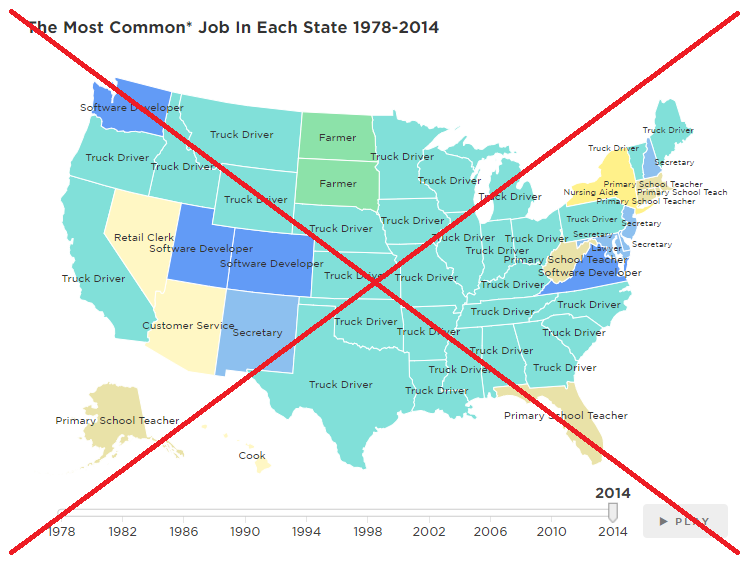 The NPR map was interesting, but of course I had a few changes I wanted to make. They didn't say exactly where they got their data, so I searched the web, and found something similar on the Bureau of Labor Statistics website. I downloaded 20 spreadsheets (for 20 years of data), imported them into SAS, and started experimenting. Here's what I came up with (click the image below to see the interactive version): 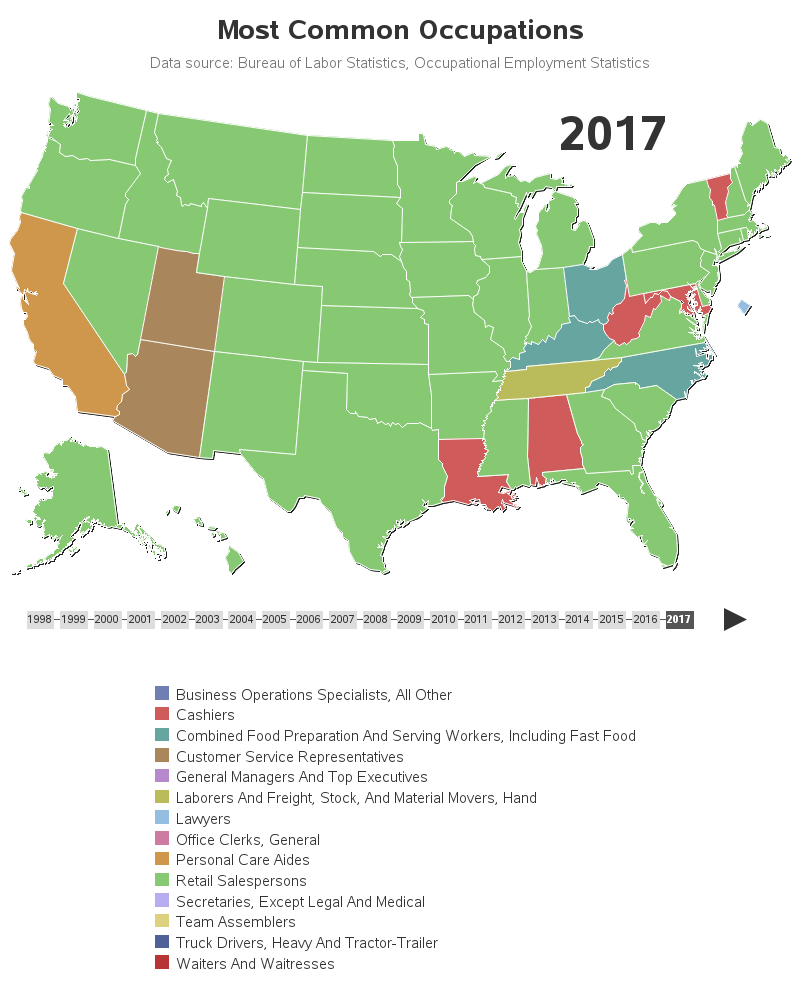 Here are some of the changes and features of my map:

As I was working through this analysis, it occurred to me that a lot depended on how the jobs were grouped or split in the data. The NPR article even mentioned that they excluded the following two catch-all categories in their data: "managers not elsewhere classified" and "salespersons not elsewhere classified." I'm not sure that excluding these categories is the right thing to do - seems like that would bias the data quite a bit (at the very least, their map should be labeled to let people know those two categories were excluded).

And now a little something for you coding-geeks that are wondering how I created my map ... I could have used SAS Visual Analytics or JMP to create an animation with a slider-control along the bottom, similar to the NPR map, but I was wanting to use traditional SAS. Traditional SAS allows you to easily create GIF animations which you can view in a browser, but a GIF animation has some limitations:

So I decided to create a GIF animation (which you see when you click the arrow), and also fake a year slider/selector bar along the bottom. When you click the year in this selector bar, it shows you a totally different map for just that year. It does this by jumping to an HTML anchor for that year, which happens very quickly (hopefully instantaneous).

To create these separate maps, I could have repeated my GMap code 20 times (for the 20 years), but that would have been a lot of repetitive code to write and maintain. Or, I could have placed one copy of the GMap code in a SAS macro, and then called the macro 20 times (passing in the year each time).

But I chose to use 'by' processing instead, and ran my GMap 'by year'. You have to take great care in preparing your data and annotation to work with a by statement - but once you've got everything set up, this is a very code-efficient way to do it! Here's a bit of my code, showing several ways I took advantage of the by variable:

Here's an explanation for the bits of code circled above: