Has anyone ever broken up with you, and left you thinking "Wow, I didn't see that coming!" In hindsight, maybe you could have seen it coming. At least from a statistical perspective. Let's dive into this topic with some lighthearted discussion, and plot some Facebook data...

When it comes to breaking up, there's a guy-talk joke that you should break up right before Thanksgiving, and then wait to start dating again until after Valentine's -- that way you don't have to go to all the family dinners with your girlfriend's family, and you get out of buying her several gifts, etc.

An interesting NPR article mentions another twist on the phenomenon of breaking up during the Thanksgiving holiday, calling it the "turkey drop season." No, a turkey drop isn't like the possum drop they do in Clay's Corner, NC for the New Year's Eve celebration! NPR explains that "The turkey drop is that holiday breakup season where all the college students return home for their first major vacation, and everyone breaks up" (this is generally freshmen who have been in college for a couple of months, and finally decide to break off the long-distance relationship with their pre-college sweetheart).

These were interesting theories (or urban legends?), but I wondered if real-world data would confirm, or refute, them? And what other breakup trends might the data show? ...

Several years ago, David McCandless teamed up with Lee Byron to create a graph of real data showing the timing of breakups throughout the year (see his book The Visual Miscellaneum, p. 179). The data came from Facebook's 2008 Lexicon service, which allowed you to specify keywords & phrases, and provided you with the frequency of those words in Facebook status updates over time. There's no explanatory text in his book (only the graph), but an article on nydailynews.com explains that the data is based on 10,000 Facebook users in 2008. Here's the graph: 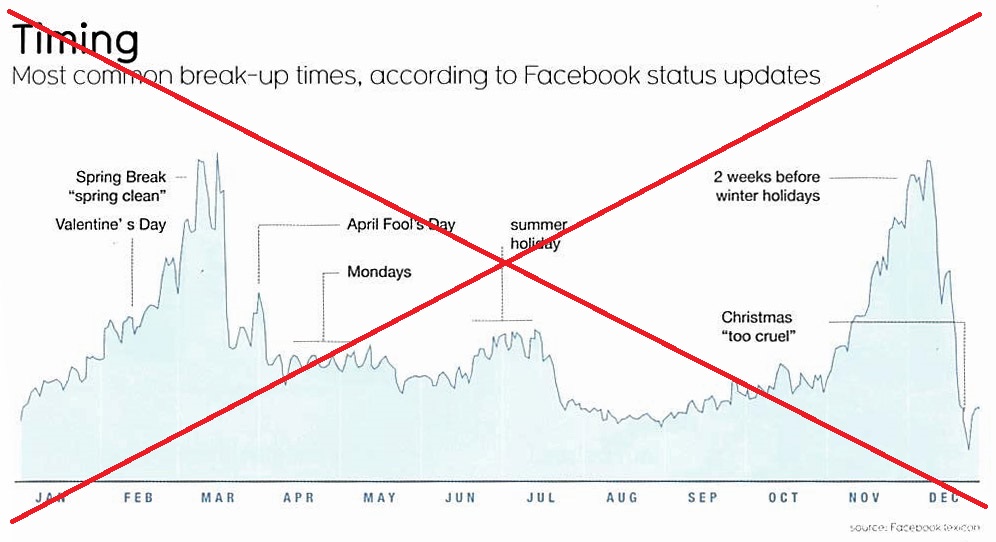 It was a decent graph, but a little difficult to determine exactly what date peaks occurred on. Also, some of the labels ran together (Spring Break & Valentine's), and I think the extra text such as "spring clean" and "too cruel" cluttered the graph, without adding any additional insight.

So I decided to create my own version, using SAS Software. I wouldn't find McCandless' raw data anywhere, and Facebook no longer offers the free Lexicon service therefore I couldn't generate fresh data for the current year. Therefore I painstakingly went through his graph one point at a time, and estimated & transcribed a data value for each day of the year (yes, it was very tedious!) I then created the following graph: 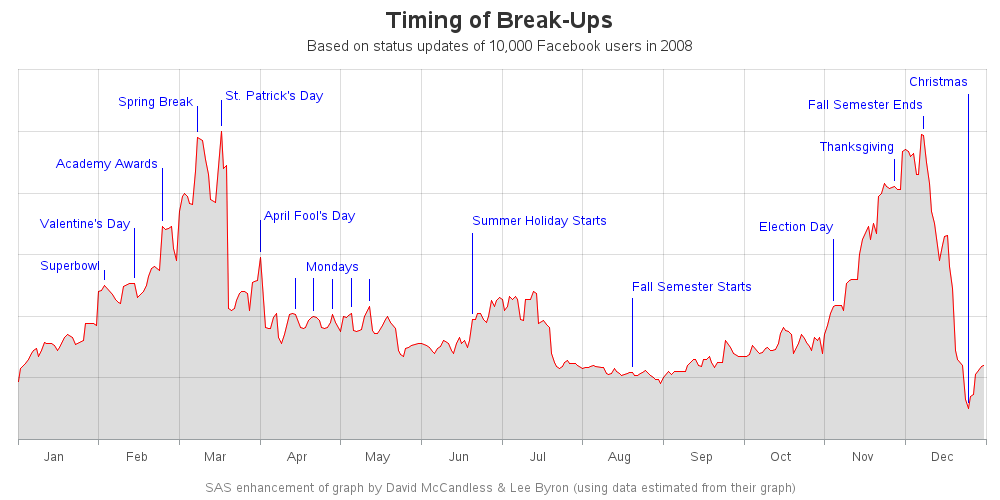 Here are some of my changes & improvements:

The graph does seem to concur that there are a lot of breakups between Thanksgiving and Christmas ... but it also shows a lot of breakups in February & March. It's an interesting graph, but for me it raises more questions than it answers. For example:

What other questions or suggestions do you have, for analyzing breakup data? Feel free to leave a comment!