The way your graph looks can make all the difference ... two people can graph the exact same data in essentially the same way, but one of the two graphs can be perceived as much better than the other. Hopefully reading my blogs will help you create the better graph!

Way back in my formative high school and college years (1980s & 1990s), there was a lot of emphasis on having the right look. A popular song at the time was ZZ Top's Sharp Dressed Man, TV shows like Miami Vice always had a certain fashion sense about them, and the Dress For Success book told us all what to wear for our interviews. My buddy Anil was probably the sharpest dressed guy in our dorm, and he is now in Abu Dhabi working for one of the largest sovereign wealth funds in the world ... so, apparently all that sharp dressing worked! Here's a picture of Anil dressed for a typical day at college (can you guess what year this was?) 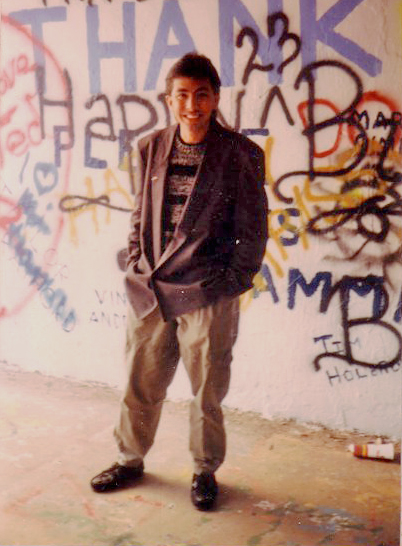 Well, graphs are no different ... If your graph doesn't have the right look, then it will not be nearly as successful. I recently found some interesting graphs showing social network poll results, that make a good example of this. They weren't bad graphs, per say, but they just didn't have the right look.

Their first/overall graph was too cluttered. Why did they use a smartphone screen-capture on the left to show the survey question - why not just have that in the title of the graph? Why did they put the A/B/C/D in front of the social network names? (presumably to control the order of the bars - but why?!?) Why duplicate the social network logos below the bars, and also in the smartphone screen capture? The graph caught my attention, but I had to spend way too much time figuring it out. 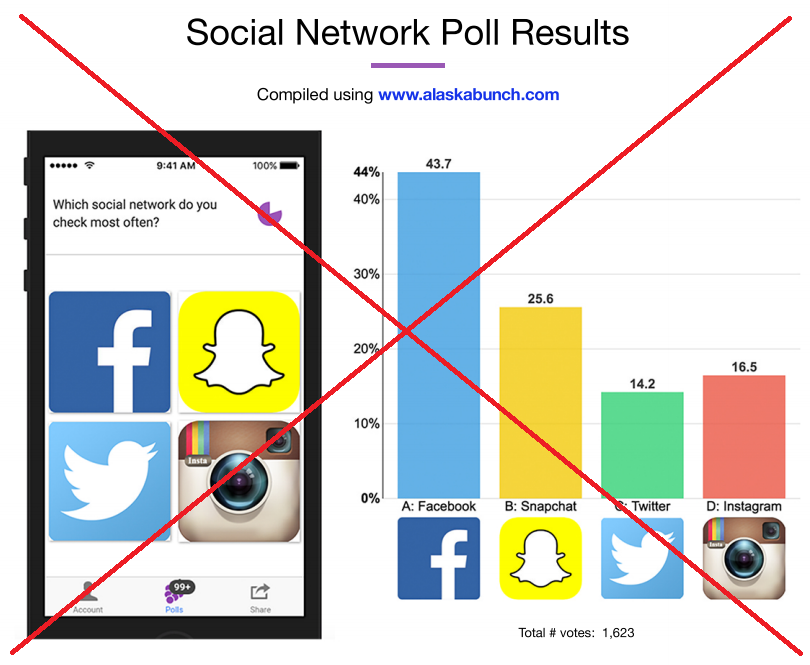 In my SAS version, I basically used the same layout and colors, but simplified the graph considerably. And if being able to understand a graph easily & quickly is 'success' ... I think my graph is definitely more 'dressed for success' than the original one was.   :-) 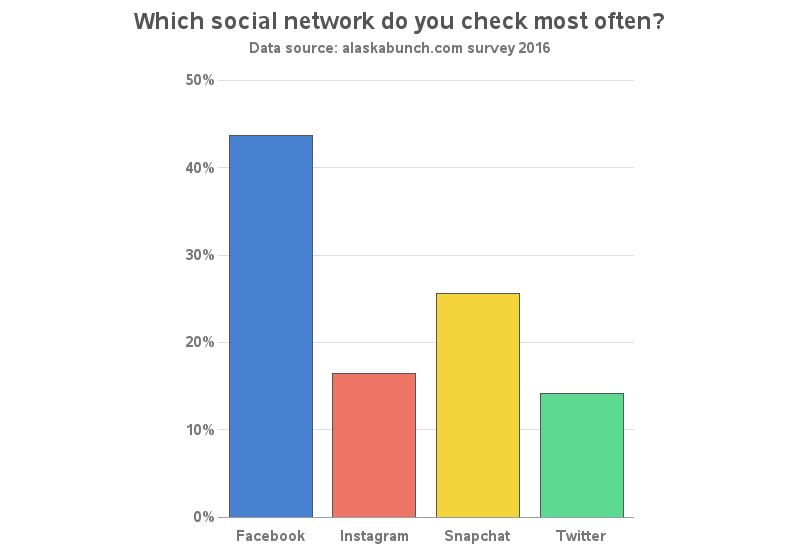 They also showed the survey results by gender. This graph was a lot better than their first one, but it still had the A/B/C/D in the legend, and I'm not sure why they decided to label 51% on the response axis. Also, I think it's a bit confusing that they used vertical bars for the first chart, and now changed to horizontal bars - either orientation would be OK for this data, but I think it would be best to use the same orientation in both charts. 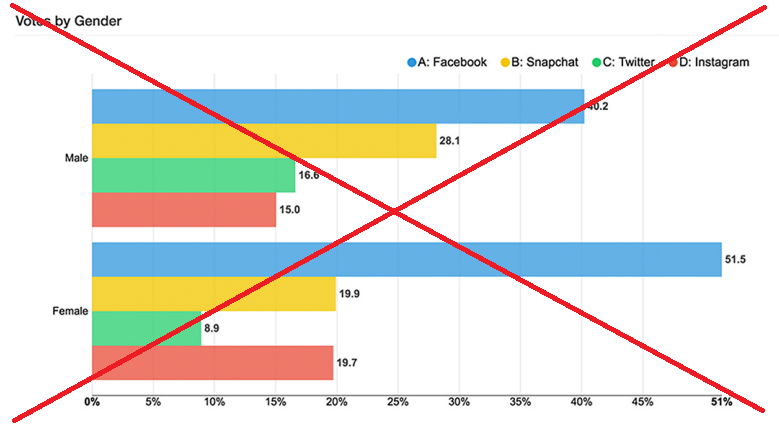 Here's my version of the gender plot - note that I used vertical bars so it's the same layout as the first chart, and I labeled the bars rather than using a color legend. 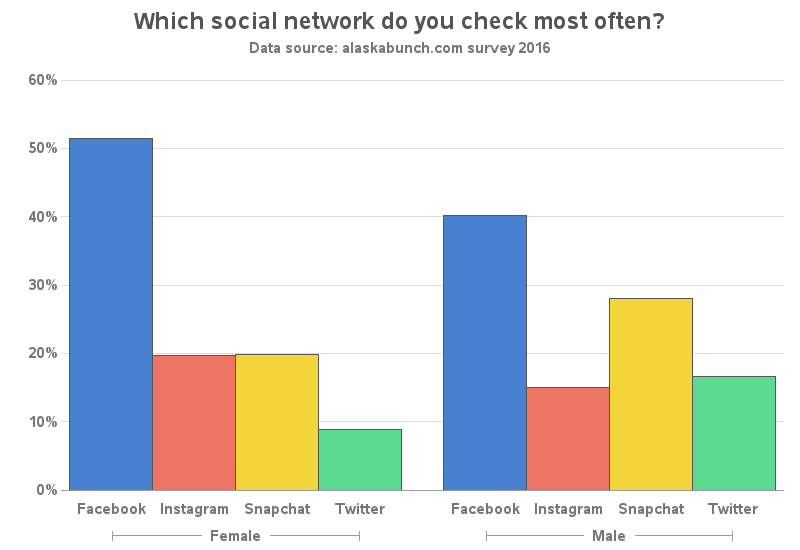 They also showed the data by age range. The main problem here is that I would put the lower age ranges at the bottom of the graph, and the higher ages at the top of the graph. 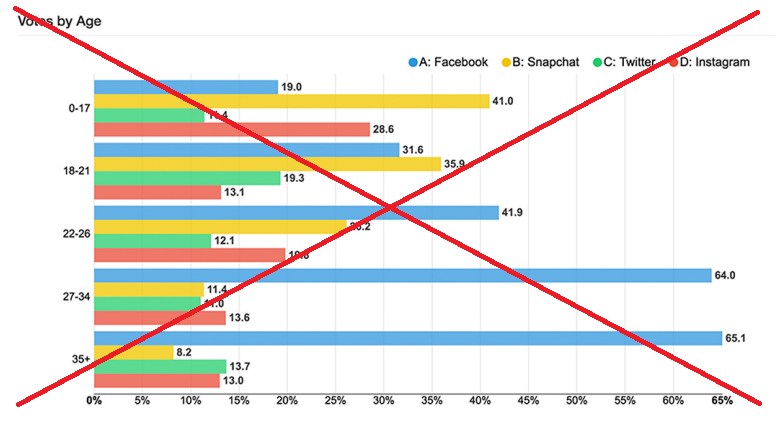 Someone on Statpedia created another version of this graph, using stacked bars. I like the stacked layout better, but their graph still had the lower ages at the top of the graph. 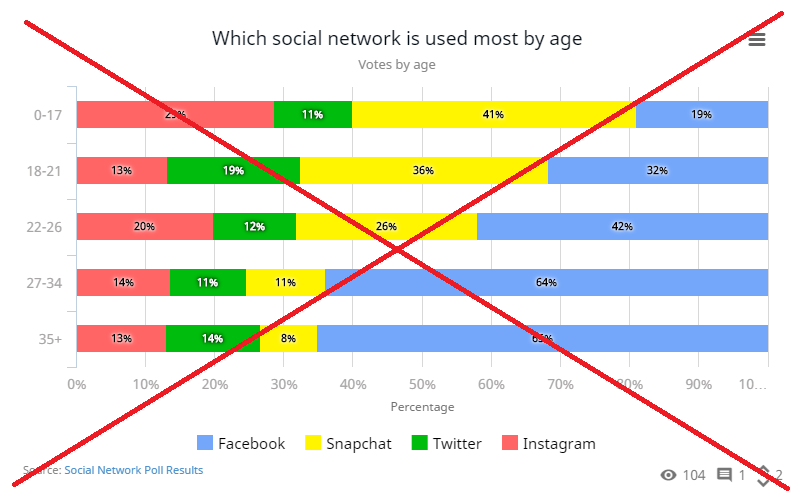 Here's my version of the graph. Note that I put the higher ages at the top of the axis, and I eliminated the space between the bars. My legend is also in the same order as the bar segments are stacked. I think this is a nice sharp (dressed) graph! 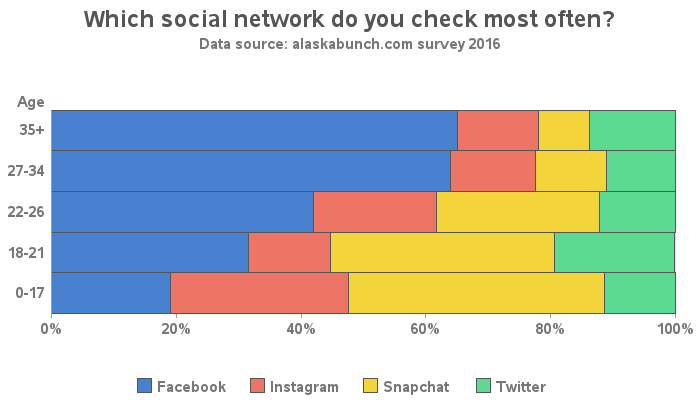 Now for the big question - do you agree with the survey results? Why do you think the younger people check Snapchat more often, and the older people check Facebook?