I recently read an article that claims 35% of men, and 40% of women in the US are now obese. Yikes! I wondered when this happened, and whether it had been a gradual or sudden change. If I only had some graphs ... which the article didn't provide.

I did some searching, and found a paper on Overweight and Obesity Statistics that seemed to have what I was looking for. Specifically, it had the following graph on p. 4:

But after studying the graph a bit, I was surprised to notice that the time axis was not proportionally spaced - say what!?! The evenly spaced tick marks represented year spans of 12, 6, 14, 6, 2, 2, 4, and 2 years. This stretches some sections of the graph, and compresses other sections - the end result is that you really can't trust what you see.

So I dug up the data from the two sources (Ogden, Flegal), entered it into a SAS dataset, and created my own version of their plot. In this first iteration, I created my plot like theirs - even with the same deceptive time axis scale. I did this to make sure I had the same data, and found one oddity ... it appears that where the papers listed a range of years for the data, they had only graphed one of the two end-points (I'm graphing the data the same way they did, for now, but will use all the data points in my new/improved version). 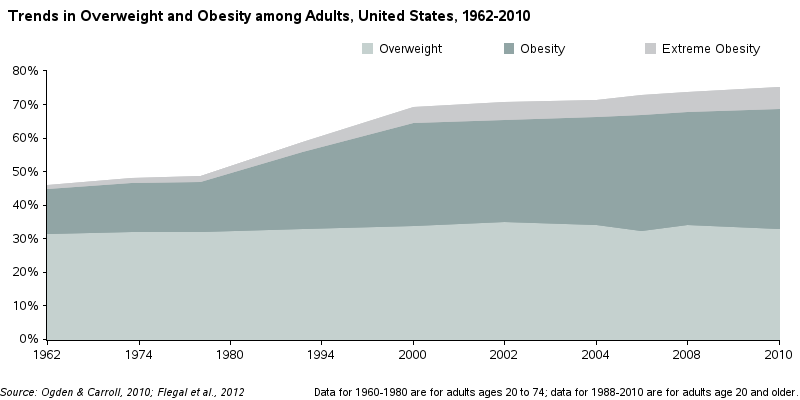 In my first iteration of improvements, I change the time axis to be proportionally spaced, and I used data points for both ends of the range of years reported in the data tables. Note that changing the axis scale makes it much more obvious that the increase in obesity is a fairly recent change. 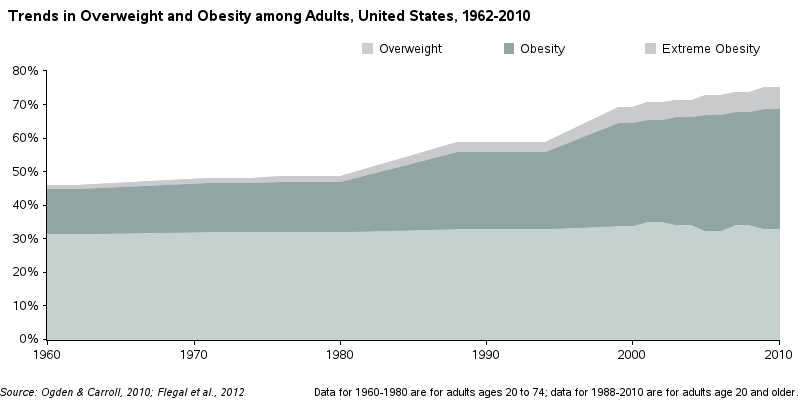 As I worked with the graph, I started noticing that the empty/white area above the shaded areas represented the Not Overweight people - so why not actually show that as a category, and make this a stacked 100% graph? And since the shaded areas are stacked in a certain order (less-bad to more-bad), it would make more sense for the Not Overweight people to be at the bottom of the graph, rather than the top. Here's the graph with those changes: 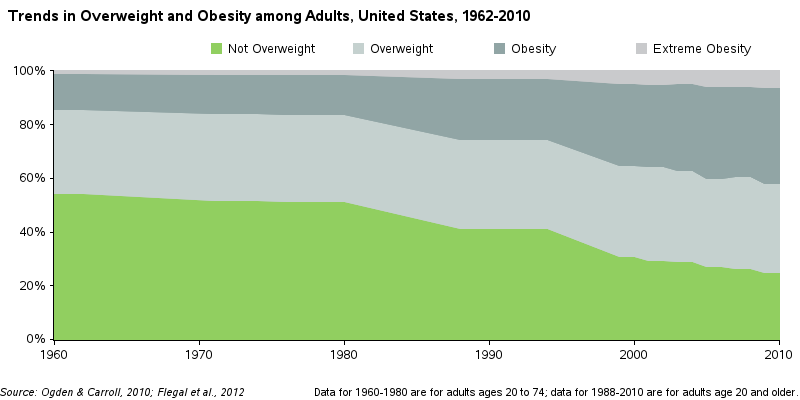 I used a bright/happy greenish color for the Not Overweight category, but I don't really like the colors used in the original graph. When you're representing ranges in a certain order, it is customary to go from a lighter to darker shade ... but in the original graph they used a medium grayish shade for both the bottom and top category. I decided to change it, and use colors such that the more overweight you are, the darker the shade of red. Here's my final graph - notice that I also got rid of the color legend, and added simple labels to each weight category. 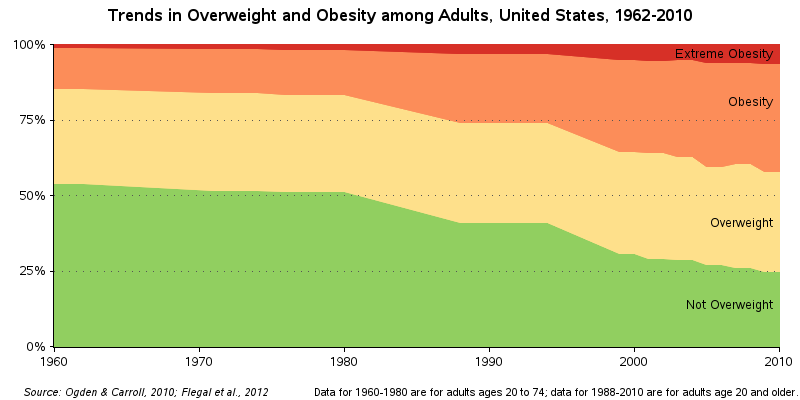 So, it looks like this trend towards obesity started in the 1980s. Some blame it on fast-food and sodas. But I wonder if maybe it has more to do with the proliferation of PCs and cable TV, and people spending more time sitting in front of them and less time doing something active outdoors(?)

What's your theory on why the US population has put on so much weight in the past 3 decades?