Are you an NFL fan, or curious about analyzing social media data? -- Well, in either case, this blog's for you!

I recently read a fascinating Facebook article that included a U.S. county map showing which NFL (U.S. football) team had the most 'likes' in each county (based on ~35 million Facebook users who have 'liked' one of the 32 NFL teams).  It was very interesting to see which teams had mostly 'local' support, and which teams had a large fanbase spread across multiple states.  For example, I was surprised to see that my county (Wake County, NC) was dominated by Pittsburgh Steelers fans. 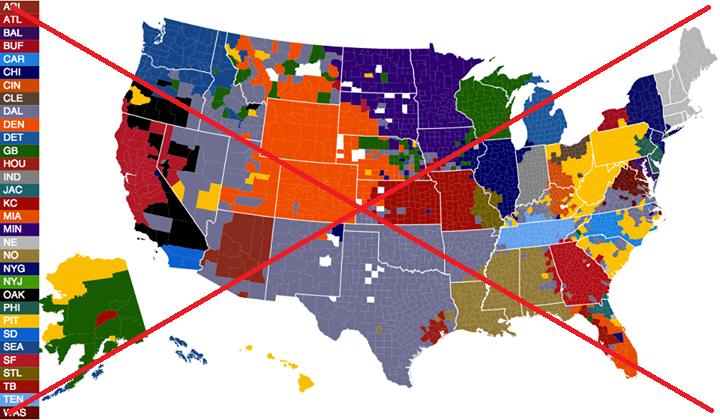 But upon closer examination, I found that the map in the Facebook article had some problems.  For example, many of the teams were represented with nearly the same colors - and even when I used a tool to find the exact RGB of the pixels on the screen, I could not determine exactly which colors in the map went with which colors in the legend, because the RGB values varied from pixel to pixel (perhaps there was some shadowing/blending going on?)  Also, I wasn't sure exactly what some of the team names were, since the map only showed the abbreviations.  And the map had no title or other identifying information (so it was hard to know the 'context' when people took just the png image of the map and re-posted it).  And I wasn't sure if the blue 'things' between Alaska and Hawaii were the islands of some other U.S. territory, or part of Alaska.

Of course, it's "poor form" to just point out flaws in a map, without actually providing a useful alternative ... therefore (of course) I set out to create my own SAS version!

I invite you to click the thumbnail snapshot image below to see my full-size interactive SAS map!

Note that the colors in my map exactly match the colors in the legend, and you can hover your mouse over the counties to see the county name and the name of the NFL team.  You can also hover your mouse over the legend color-chips to see the full-text team name for each of the abbreviations.  The SAS map makes it clear that the blue blobs between Alaska and Hawaii are indeed part of Alaska.  And the title and footnote provide a clear 'context' for the map and the data.

Does anything in the map surprise you?  Do you think it's a good/accurate representation of the distribution of NFL fans?  How might you enhance this visualization to be even more useful?  (For example, I would love to plot this data as an animation, to see if the fans shift geographically over time). 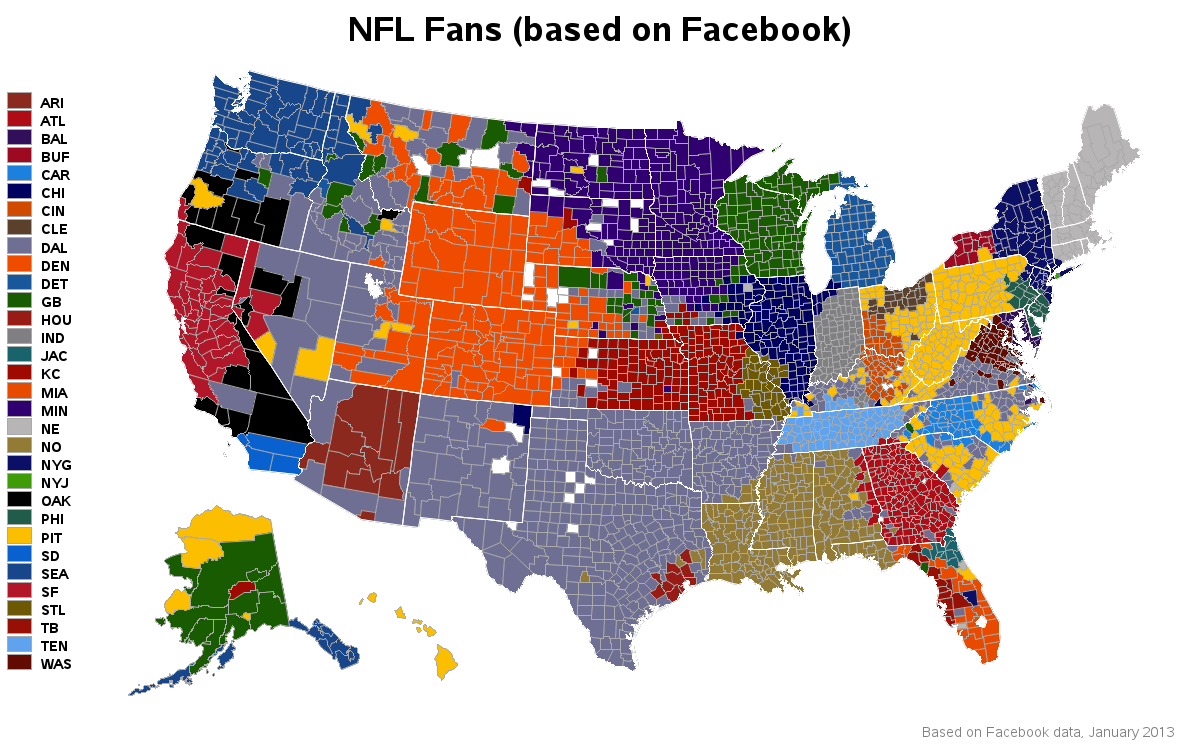 Don't you agree that SAS is an awesome way to visualize social media data!?!  Do you have access to similar data that you could also visualize on a map?  If you'd like to learn more about creating maps with SAS, check out the training course, Mike Zdeb's excellent book, and do a search for gmap in the SAS Global Forum proceedings - there's lots of great info out there!

Note/disclaimer:  I didn't have the original/raw data, therefore I had to 'estimate' the value for each county, by visually looking at the original map.  In some cases (because of the color ambiguity) it was impossible to definitively determine the favorite team of a county, so I made my best guess.