This week's SAS tip on writing LSMEANS statements comes from the big spring-green book A Step-by-Step Approach to Using SAS for Univariate and Multivariate Statistics, Second Edition. Striking in appearance, this comprehensive guide by professors Norm O'Rourke, Larry Hatcher, and Edward J. Stepanski is a great resource for students, researchers, and data analysts. And it's written in a clear and unintimidating way. 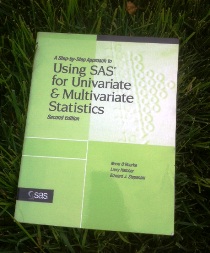 If you'd like more information about this book or to view a free chapter, user reviews, or the table of contents - visit the catalog page. You can also view a previous SAS author's tip from this book on Useful PROC CORR Options.

The following excerpt is from SAS Press authors Norm O'Rourke, Larry Hatcher, and Edward J. Stepanski and their book "A Step-by-Step Approach to Using SAS for Univariate and Multivariate Statistics, Second Edition" Copyright © 2005, SAS Institute Inc., Cary, North Carolina, USA. ALL RIGHTS RESERVED. (please note that results may vary depending on your version of SAS software)

The second LSMEANS statement is a bit more complex: