At SAS, we've published more repositories on GitHub as a way to share our open source projects and examples. These "repos" (that's Git lingo) are created and maintained by experts in R&D, professional services (consulting), and SAS training. Some recent examples include:

With dozens of repositories under the sassoftware account, it becomes a challenge to keep track of them all. So, I've built a process that uses SAS and the GitHub APIs to create reports for my colleagues.

GitHub APIs are robust and well-documented. Like most APIs these days, you access them using HTTP and REST. Most of the API output is returned as JSON. With PROC HTTP and the JSON libname engine (new in SAS 9.4 Maint 4), using these APIs from SAS is a cinch.

The two API calls that we'll use for this basic report are:

The following SAS program calls the first API to gather some account metadata. Then, it stores a selection of those values in macro variables for later use.

Here is the output of this program (as of today):

The important piece of this output is the count of repositories. We'll need that number in order to complete the next step.

Fetching the repositories and stats

It turns out that the /repos API call returns the details for 30 repositories at a time. For accounts with more than 30 repos, we need to call the API multiple times with a &page= index value to iterate through each batch. I've wrapped this process in a short macro function that repeats the calls as many times as needed to gather all of the data. This snippet calculates the upper bound of my loop index:

Given the 66 repositories on the SAS Software account right now, that results in 3 API calls.

Each API call creates verbose JSON output with dozens of fields, only a few if which we care about for this report. To simplify things, I've created a JSON map that defines just the fields that I want to capture. I came up with this map by first allowing the JSON libname engine to "autocreate" a map file with the full response. I edited that file and whittled the result to just 12 fields. (Read my previous blog post about the JSON engine to learn more about JSON maps.)

The multiple API calls create multiple data sets, which I must then concatenate into a single output data set for reporting. Then to clean up, I used PROC DATASETS to delete the intermediate data sets. 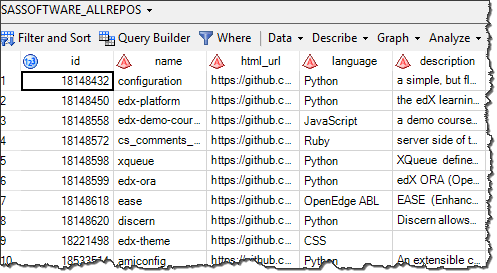 Here's the code segment, which is rather long because I included the JSON map inline.

Finally, I want to create simple report listing of all of the repositories and their top-level stats. I'm using PROC SQL without a CREATE TABLE statement, which will create a simple ODS listing report for me. I use this approach instead of PROC PRINT because I transformed a couple of the columns in the same step. For example, I created a new variable with a fully formed HTML link, which ODS HTML will render as an active link in the browser. Here's a snapshot of the output, followed by the code.

Get the entire example

Not wanting to get too meta on you here, but I've placed the entire program on my own GitHub account. The program I've shared has a few modifications that make it easier to adapt for any organization or user on GitHub. As you play with this, keep in mind that the GitHub API is "rate limited" -- they allow only so many API calls from a single IP address in a certain period of time. That's to ensure that the APIs perform well for all users. You can use authenticated API calls to increase the rate-limit threshold for yourself, and I do that for my own production reporting process. But...that's a blog post for a different day.