JSON is the new XML. The number of SAS users who need to access JSON data has skyrocketed, thanks mainly to the proliferation of REST-based APIs and web services. Because JSON is structured data in text format, we've been able to offer simple parsing techniques that use DATA step and most recently PROC DS2. But finally*, with SAS 9.4 Maintenance 4, we have a built-in LIBNAME engine for JSON.

Simple JSON example: Who is in space right now?

Speaking of skyrocketing, I discovered a cool web service that reports who is in space right now (at least on the International Space Station). It's actually a perfect example of a REST API, because it does just that one thing and it's easily integrated into any process, including SAS. It returns a simple stream of data that can be easily mapped into a tabular structure. Here's my example code and results, which I produced with SAS 9.4 Maintenance 4. 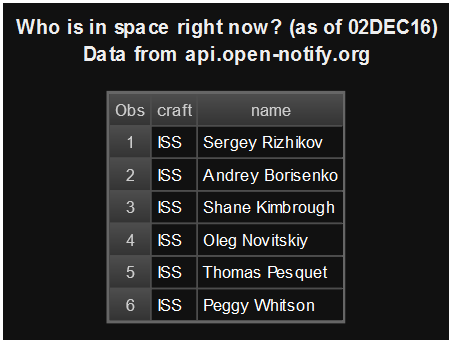 But what if your JSON data isn't so simple? JSON can represent information in nested structures that can be many layers deep. These cases require some additional mapping to transform the JSON representation to a rectangular data table that we can use for reporting and analytics.

In a previous post I shared a PROC DS2 program that uses the DS2 JSON package to call and parse our SAS Support Communities API. The parsing process is robust, but it requires quite a bit of fore knowledge about the structure and fields within the JSON payload. It also requires many lines of code to extract each field that I want.

Here's a revised pass that uses the JSON engine:

Thanks to the many layers of data in the JSON response, here are the tables that SAS creates automatically. 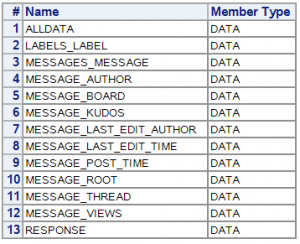 There are 12 tables that contain various components of the message data that I want, plus the ALLDATA member that contains everything in one linear table. ALLDATA is good for examining structure, but not for analysis. You can see that it's basically name-value pairs with no data types/formats assigned.

I could use DATA steps or PROC SQL to merge the various tables into a single denormalized table for my reporting purposes, but there is a better way: define and apply a JSON map for the libname engine to use.

To get started, I need to rerun my JSON libname assignment with the AUTOMAP option. This creates an external file with the JSON-formatted mapping that SAS generates automatically. In my example here, the file lands in the WORK directory with the name "top.map".

This generated map is quite long -- over 400 lines of JSON metadata. Here's a snippet of the file that describes a few fields in just one of the generated tables.


By using this map as a starting point, I can create a new map file -- one that is simpler, much smaller, and defines just the fields that I want. I can reference each field by its "path" in the JSON nested structure, and I can also specify the types and formats that I want in the final data.

In my new map, I eliminated many of the tables and fields and ended up with a file that was just about 60 lines long. I also applied sensible variable names, and I even specified SAS formats and informats to transform some columns during the import process. For example, instead of reading the message "datetime" field as a character string, I coerced the value into a numeric variable with a DATETIME format:


I called my new map file 'minmap.map' and then re-issued the libname without the AUTOMAP option:

Here's a snapshot of the single data set as a result.

I think you'll agree that this result is much more usable than what my first pass produced. And the amount of code is much smaller and easier to maintain than any previous SAS-based process for reading JSON.

Here's the complete program in a public GitHub gist, including my custom JSON map.

* By the way, the JSON libname engine actually made its debut as part of SAS Visual Data Mining and Machine Learning, part of SAS Viya. This is a good example of how work on SAS Viya continues to benefit the users of the SAS 9.4 architecture.