As a parent of children who love books, I can tell you that there is something humorous about taking a first name, adding a "Mc" and then a rhyming surname to make up a brand new character name. My daughters always loved to read the adventures of Harry Mclary from Donaldson's Dairy, and we loved to read it aloud to them. It was just fun.

The Boaty McBoatface phenomenon has taken this to the next level by adding "face" as a suffix, which often has a funny punctuating effect ("silly face", "Chu chi face", "doody face," etc. Hilarious!).

I thought that I was done writing blogs about Boaty McBoatface, but I've been hearing from so many people about this topic that I need at least this one more to finish it off.

Spoiler: NERC is not going to christen the new vessel "Boaty McBoatface." Instead the name comes from the 4th-highest vote-getter, "David Attenbourough." The famous explorer earned over 11,000 votes, or 2.78% of all votes cast. However, as a crowd-pleasing nod to the plebians, NERC will name one of the ship's remotely operated submarines "Boaty McBoatface." Hooray! I grabbed the final voting results from the NameOurShip website and re-ran my analysis. Here's the final top 10 standings. 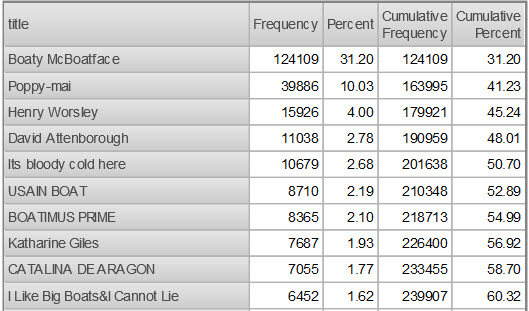 I also ran a three-panel visualization, using the method that Rick Wicklin shared, so you can see how unevenly distributed the votes remained at the end. 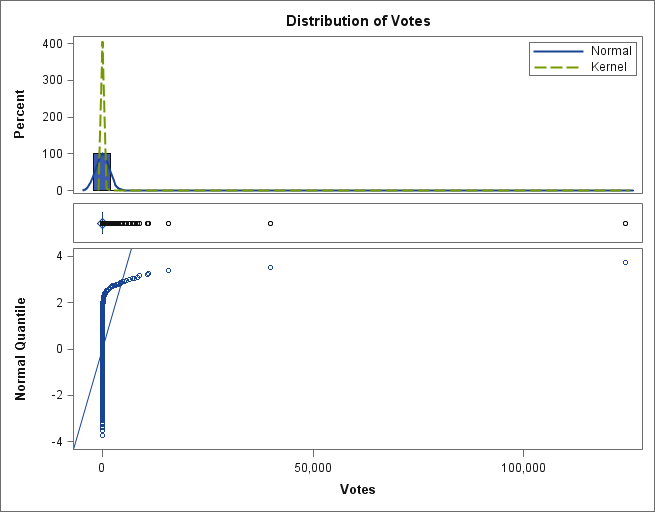 Many imitators, but original stays on top

The original entry of "Boaty McBoatface" inspired many copycats who submitted names with a similar formula. None of them seemed to have the wide appeal of Boaty, probably because they weren't first and original, but here they are with their vote counts. 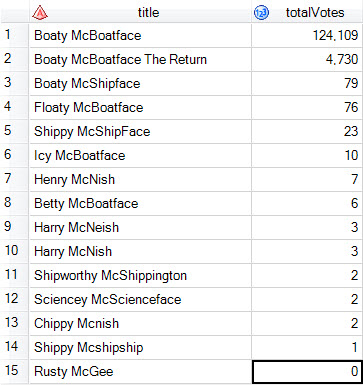 I found these in the data with a simple SQL LIKE operator, finding those names that had the pattern "blank-y Mc-blank-y". 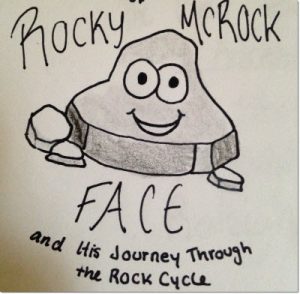 Silly names are not limited to research vessels. The world has embraced the Boaty McBoatface pattern. A colleague sent me news about Parsey McParseface, an open-source project from Google. Grumpy McNoisybutt was proposed as a name for a rattlesnake. Even my own daughter has created Rocky McRockface, a major character in her rock cycle project.

I won't say that this is my final Boaty post. Who knows? In a couple of years I might be reporting on "Boaty McBoatface"-inspired baby names. I'm confident that at least one poor child will bear the name; that's the sort of world we live in. Fortunately, children usually find a way to have revenge on their parents (which is why I have nothing but praise for Rocky McRockface).