If you think that baby names and data analysis have nothing to do with one another, then you haven’t read Freakonomics. When my wife and I were expecting our third daughter, we had specific criteria in mind for her name. I used SAS Enterprise Guide and data from the Social Security Administration to select a list of candidate names.

I first wrote a blog entry about this process last June. Joining the trend of turning blogs-into-real-publications, I've written a paper for SAS Global Forum 2008 that fills in more of the details. In today's blog entry, I've included a high level summary plus a link to the SAS Enterprise Guide project that I created along the way.

Background: The Shame of Being Unoriginal
It started with my first two daughters, Marguerite (nickname: "Maggie") and Evelyn. We did not apply particular methodology when selecting their names, but our friends noticed something: each name was considered "old-fashioned" and not used much anymore. At least, that was a first impression. However, as the months went by, we noticed that other families that we met had small children with the same names we had picked. We had been part of a trend, completely by accident. In fact, according to the Social Security Administration, "Evelyn" ranks 98th in the top 1000 girls' names of 2002. I never saw that coming.

Analysis to the Rescue
When we were expecting our third daughter in 2005, I decided to devise a litmus test for our preferences. Knowing that we like "old-fashioned" names, but don't want to take part in a "name comeback" trend. In plain language, the question was: what are the names that were popular 80 to 100 years ago but aren't as popular now? Even fancy new web tools like the Baby Name Wizard don't answer that directly.

Here is what I did to find the answer:

2. Collected the top 1000 girl names from the most recent year available (2003 at the time), and brought that data into SAS.

3. Joined the two data sources to create a result set that contained only those girl names that appear in the "old names" list but not in the "new names" list. (In query parlance, this was a full outer join of the two tables based on "girl name", where "old girl name" is NULL in the "new girl name" list.)

Here is a snapshot of the process flow in the SAS Enterprise Guide project. It shows the two data sources joined in a query step.

The result was over 900 names. The next step was clear: pick from one of these 900 names and we'd be original. If other kids started popping up with the same name, we would be the leader, not the follower.

More to Decisions than Analytics
I'll be honest -- there is a reason some of those old names aren't used much anymore (apologies to any "Hilda"s out there reading this). In the end, we settled on "Gwendolyn," a name that sounds old fashioned and yet still sweet to us. It turns out "Gwendolyn" still has some measure of popularity as a girl name -- it ranked 598th out of 1000 in the year 2003 (when 456 little girls were given that name, according to the Social Security numbers).

But at least we walked into that name fully informed. We haven't yet met very many other little Gwendolyns, so perhaps her name will still rank as one of her many outstanding, unique qualities.

Looking Back: How We Did
Taking the data available at the Social Security Administration's "baby names" site and bringing it into SAS Enterprise Guide, I was able to plot the popularity of the names we gave to our three children. 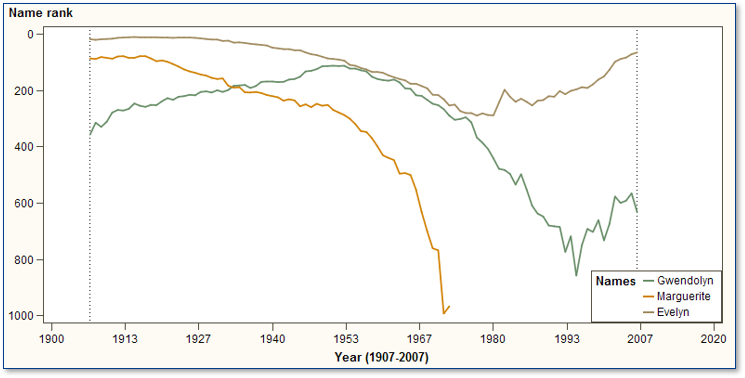 As you can see, we bucked the trend with Marguerite (named after my maternal grandmother). Her name (shown by the yellow line) drops out of the top 1000 list after 1972. But it appears that Evelyn (the brown line along the top) can expect to encounter many peers who share her first name. With Gwendolyn (the green line), we ended up somewhere in the middle. Note: The plot above shows ranking trends only, not frequency of use. We cannot draw conclusions about how often a name is used in relation to other names; we can infer its popularity based only on its placement in the top 1000 names.

Notes:
The full paper is available in the SAS Global Forum Proceedings.