In a voting contest, is it possible for a huge population to get behind a ridiculous candidate with such force that no other contestant can possibly catch up? The answer is: Yes.

Just ask the folks at NERC, the environmental research organization in the UK. They are commissioning a new vessel for polar research, and they decided to crowdsource the naming process. Anyone in the world is welcome to visit their NameOurShip web site and suggest a name or vote on an existing name submission.

As of today, the leading name is "RRS Boaty McBoatface." ("RRS" is standard prefix for a Royal Research Ship.) This wonderfully creative name is winning the race by more than just a little bit: it has 10 times the number of votes as the next highest vote getter, "RRS Henry Worsley".

I wondered whether the raw data for this poll might be available, and I was pleased to find it embedded in the web page that shows the current entries. The raw data is in JSON format, embedded in the source of the HTML page. I saved the web page source to my local machine, copied out just the JSON line with the submissions data, then used SAS to parse the results. Here's my code:

With the data in SAS, I used PROC FREQ to show the current tally: 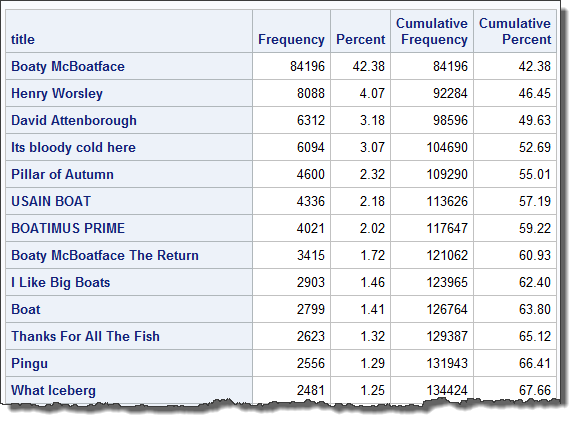 The numbers are compelling: good ol' Boaty Mac has over 42% of the nearly 200,000 votes. The arguably more-respectable "Henry Worsley" entry is tracking at just 4%. I'm not an expert on polling and sample sizes, but even I can tell that Boaty McBoatface is going to be tough to beat.

To drive the point home a bit more, let's look at a box plot of the votes distribution.

In this output, we have a clear outlier:

If we exclude Boaty, then it shows a slightly closer race among the other runners up (which include some good serious entries, plus some whimsical entries, such as "Boatimus Prime"):

See the difference between the automatic axis values between the two graphs? The tick marks show 80,000 vs. 8,000 as the top values.

Digging further, I wondered whether there were some recurring themes in the entries. I decided to calculate word frequencies using a technique I found on our SAS Support Communities (thanks to Cynthia Zender for sharing):

The top words evoke the northern, cold nature of the boat's mission. Here are the top 25 words and their counts:

I don't know when voting closes, so maybe whimsy will yet be outvoted by a more serious entry. Or maybe NERC will exercise their right to "take this under advisement" and set a certain standard for the finalist names. Whatever the outcome, I'm sure we haven't heard the last of Boaty...