Netflix has made a big splash in the news with its use of big data. By analyzing millions of data points about the viewing habits of its customers, the movie delivery giant used the insight it gained to devise the "perfect show". One of the defining characteristics of the show, aside from its cast and story line, is in its packaging. House of Cards is delivered in a series of episodes, but released all at once, thus enabling the audience to indulge in "binge viewing".

In my household we are familiar with binge viewing. We don't watch a lot of television, and "media" is all-but-banned during the week when school is in session. That means that during weekends and holidays, in between other scheduled activities, the family lets loose. And since we don't subscribe to any other cable or satellite programming, Netflix receives the biggest share of our attention.

You might remember how I've used SAS to analyze our personal Netflix viewing history. This graph (produced using PROC SGPLOT) shows how our per-day minutes-of-watching has grown ever since Netflix introduced television streaming (around April 2010). 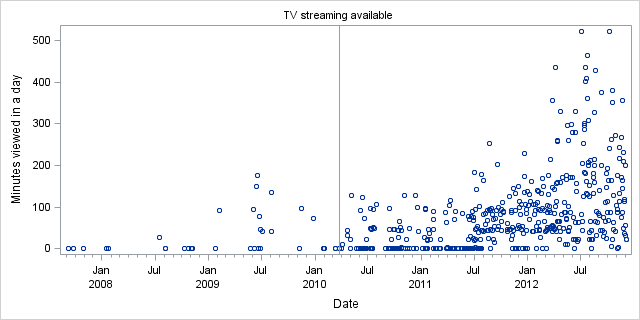 As you can see from the data points on the right side of the plot, we've had our share of Netflix binges. Here's the breakdown by day-of-week. Saturday accounts for 23% of our viewing minutes, while Friday-Sunday add up to 53%. (That accounts for 21,517 minutes -- that's 358 hours! Just imagine if we did watch a lot of TV...). 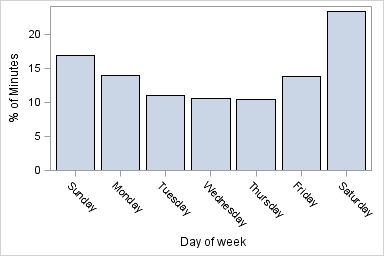 Okay, so if Netflix's predictive model indicates "viewers watch a lot in one sitting", then our behavior (sometimes) fits that model pretty well. But what about the content? Here are the top 10 serial shows that we've streamed using our account: 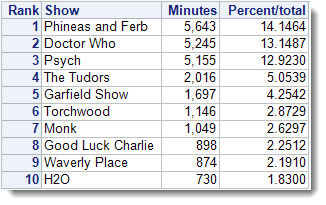 I think that this is where our household viewing habits depart from the predicted model. And while House of Cards might be a compelling show, it's not likely to appear on our top 10 chart anytime soon. If Netflix had wanted to design a show especially for us, the plot pitch might have sounded like this:

A groundbreaking sci-fi historical fiction series, featuring several British and Australian actors. Chunked into 22-minute episodes, the stories revolve around two smart boys -- one a fake psychic and the other an OCD-afflicted detective -- who travel through time and space. With their only goal to fill their summer vacation with interesting activities, they consistently foil the evil plots of the antagonist, Dr. Doofenshmirtz. Subplots revolve around Dr. Doofenshmirtz acquiring and dispensing with several wives (his "evil queens"), who seem to always fall victim to his many "-inators".

Will the boys ever get "busted"? Not if the mermaids have anything to say about it.

I'm not sure that such a show would be a commercial success, even though it might be a big hit in the Hemedinger household. It was wise of Netflix to use the accumulated viewing habits of all of its customers, and not just me, to train its analytical models. And I think the House of Cards fans will agree with that.