Every presidential candidate has a list of states they’re expected to win, but there are always states that are too close to call because they have similar numbers of registered voters for each of the two dominant political parties: Democrat and Republican. It’s in these “swing” states that candidates invest the most time and money in advertising and campaigning in hopes of swinging voters to their side.

North Carolina is considered a swing state for the 2020 presidential election.

North Carolina hasn’t always been a swing state. Let’s look at a quick history of voting trends in the state:

As of October 10, 2020, there are 7,164,388 registered voters in NC. The largest majority are registered Democrat, followed by Unaffiliated, and then Republican. Each of those affiliations are only separated by around 200K registered voters. 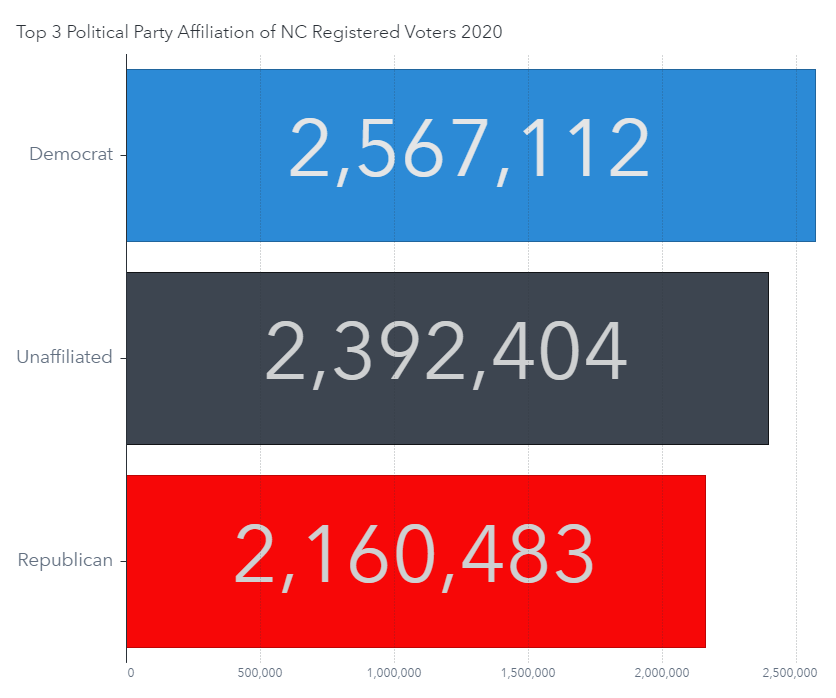 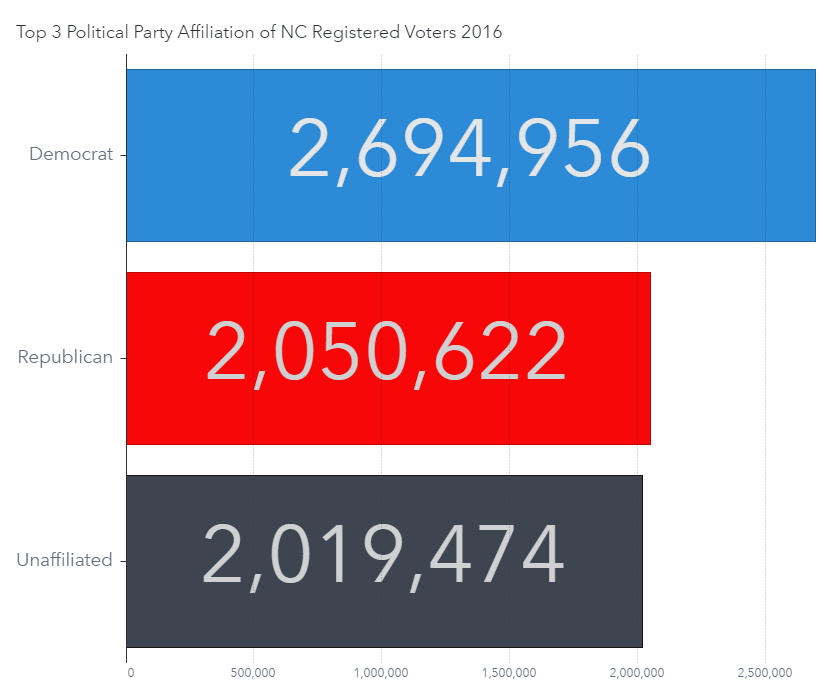 Voter registration data is only part of the story. Just because someone is registered to vote doesn’t mean they will.  What did voter participation in North Carolina look like during the last three presidential elections? 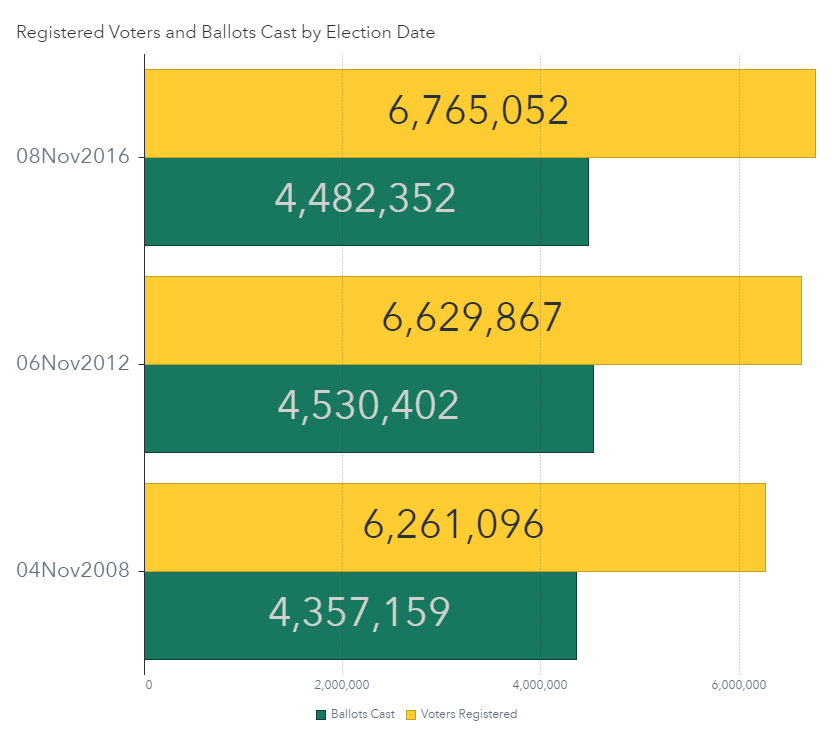 Interestingly, the number of registered voters and the number of voters who actually participated has remained fairly consistent. Broken down by percentage, that’s 69% in 2008, 68% in 2012, and 67% in 2016. That’s a lot of votes left on the table. 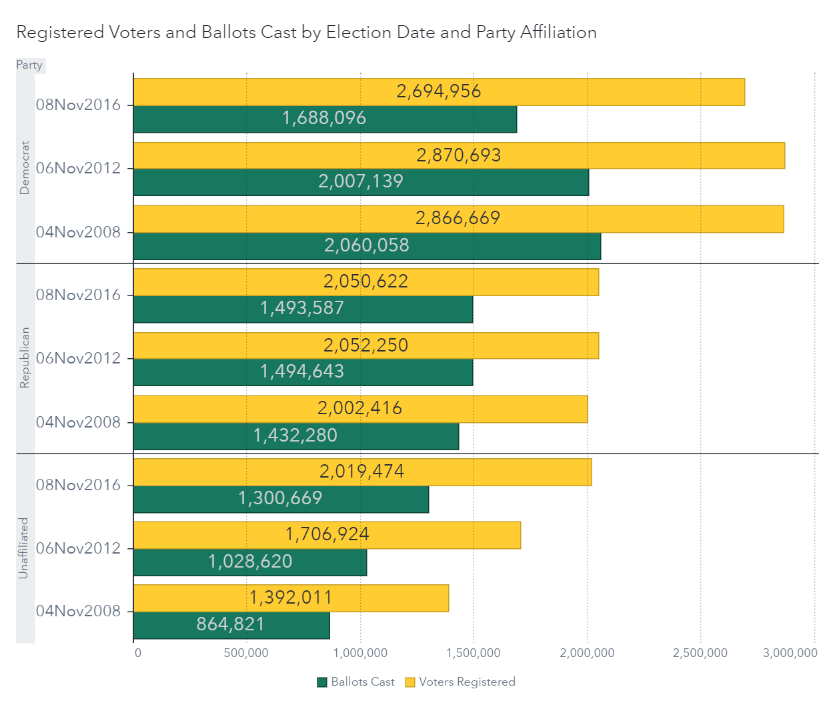 Beyond political parties, what do we know about registered voters in the last election? Baby Boomers were the biggest segment of voters and the Silent Generation voted more than Generation Z. The Generation Z segment is understandably small.  Generation Z starts with anyone born in 1997, so eligible voters for the 2016 election would only span 2 birth years, 1997 and 1998, making them either 18 or 19 at that time. 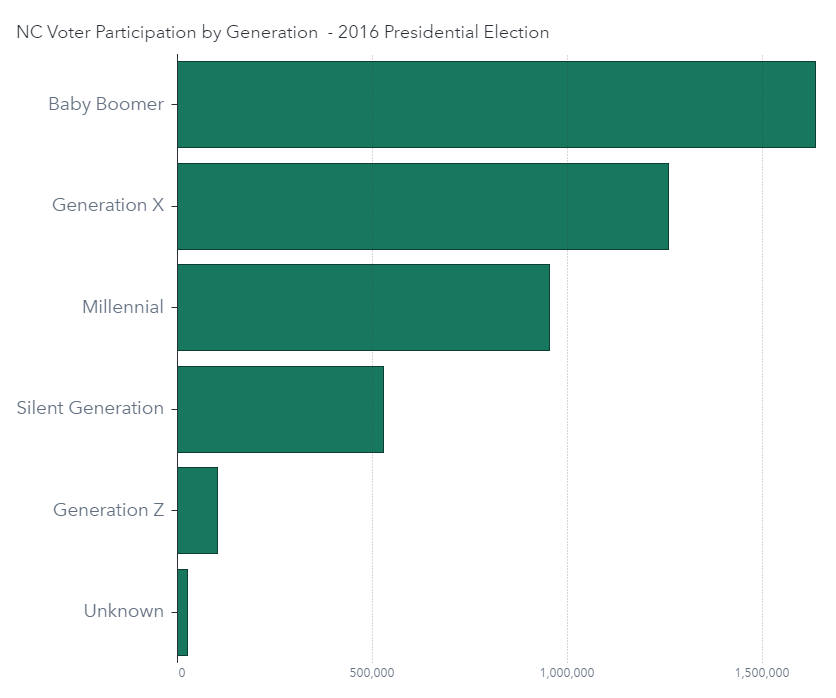 What did the generations look like by party in 2016? Is it true that the younger generations are more liberal than the older generations? The Millennials and Generation Z registered voters are more Unaffiliated than Democratic or Republican by a small margin, however, when you look at the number of those younger voters who are actually affiliated with a party, it appears that most are still interested in participating in the two major parties. 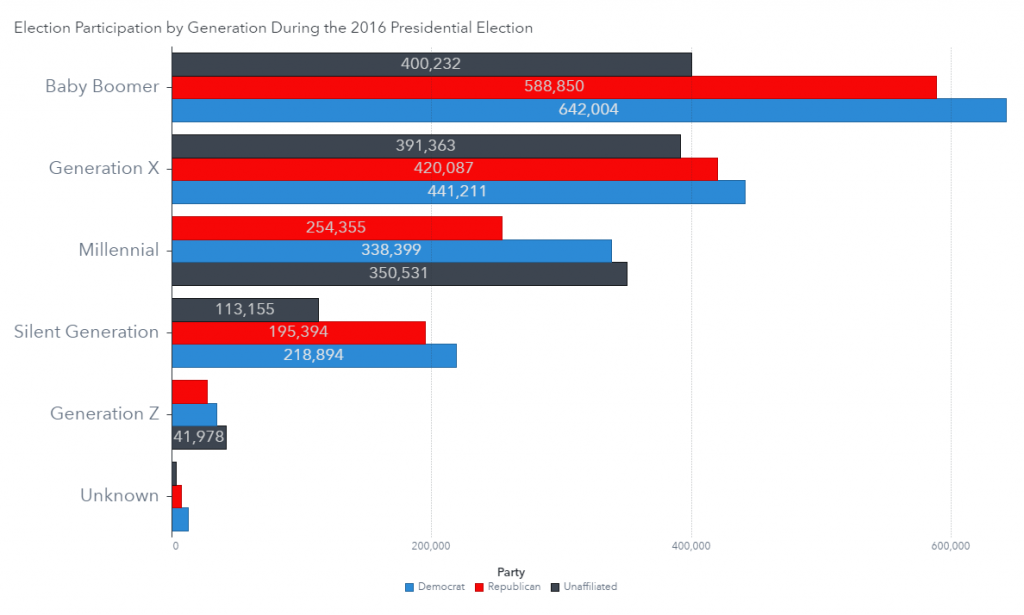 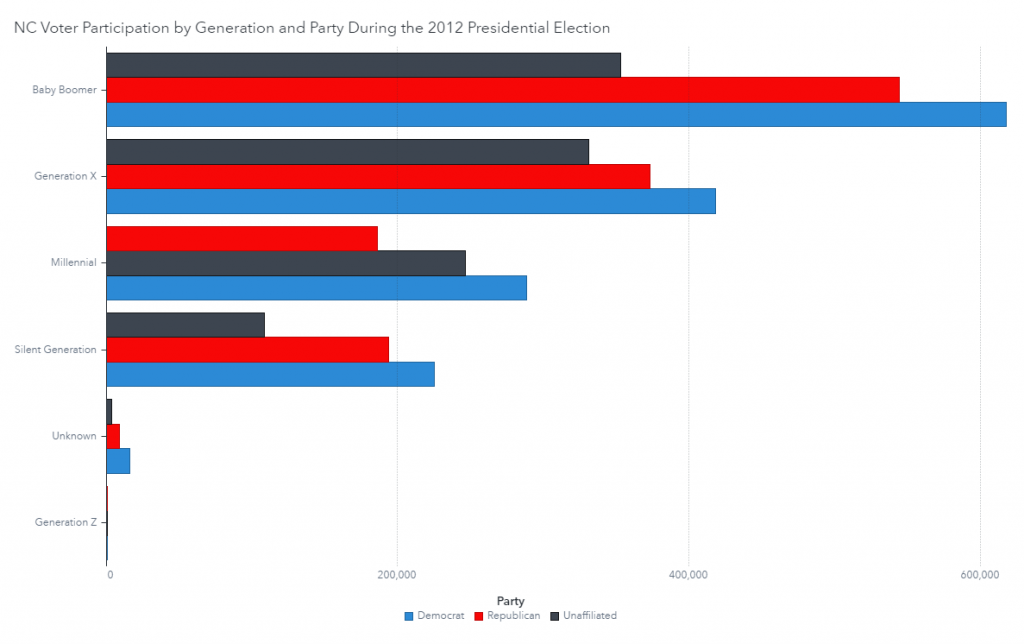 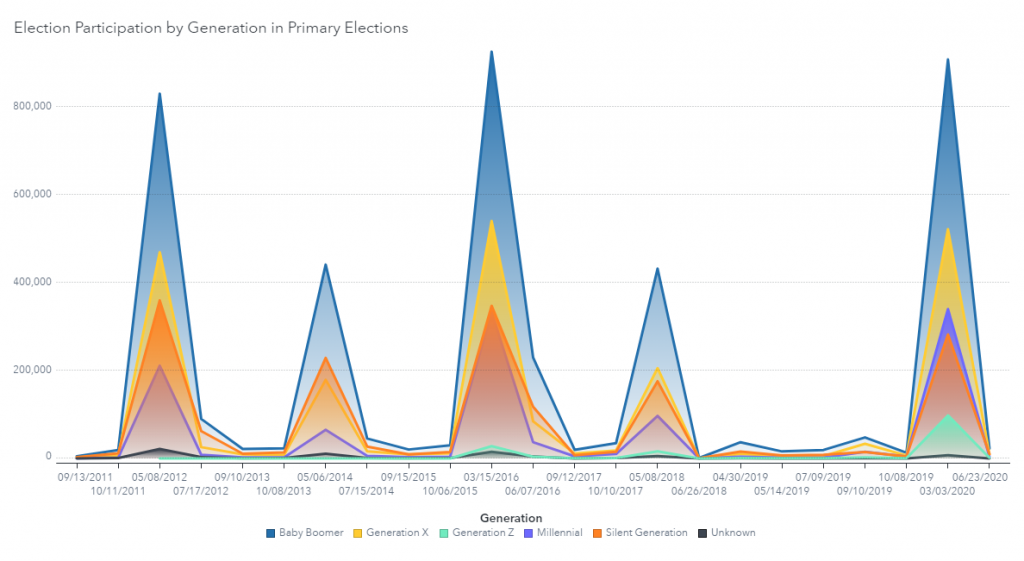 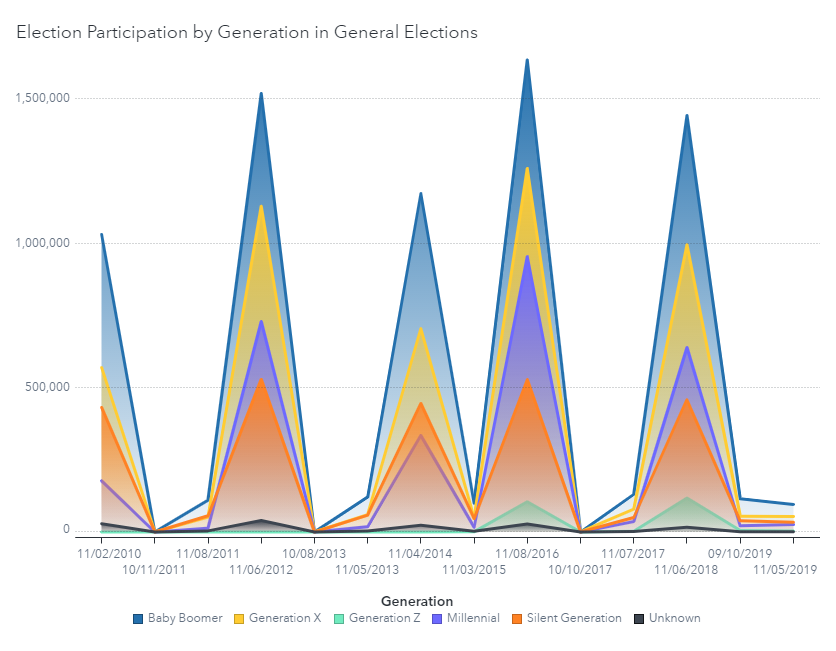 There are three other parties recognized in NC—the Libertarian, Green, and Constitution parties. They comprise a small percentage of voters, but those voters can mean the difference between a candidate’s win or loss.  The largest participation of these parties is Libertarian. There are over 50,000 voters in NC registered with third parties. 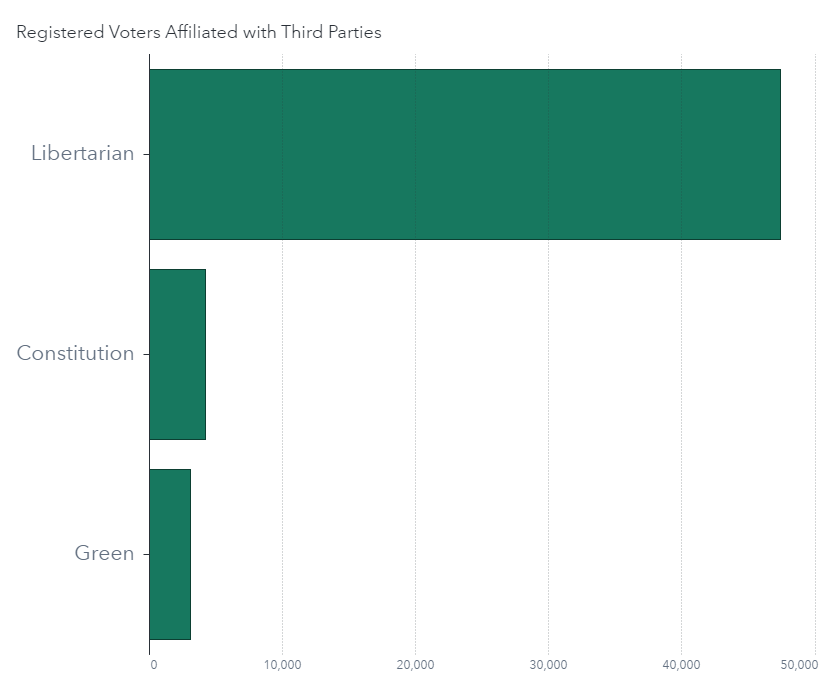 Looking at election participation by third parties by generation, Millennials and Generation X comprise the most voters. 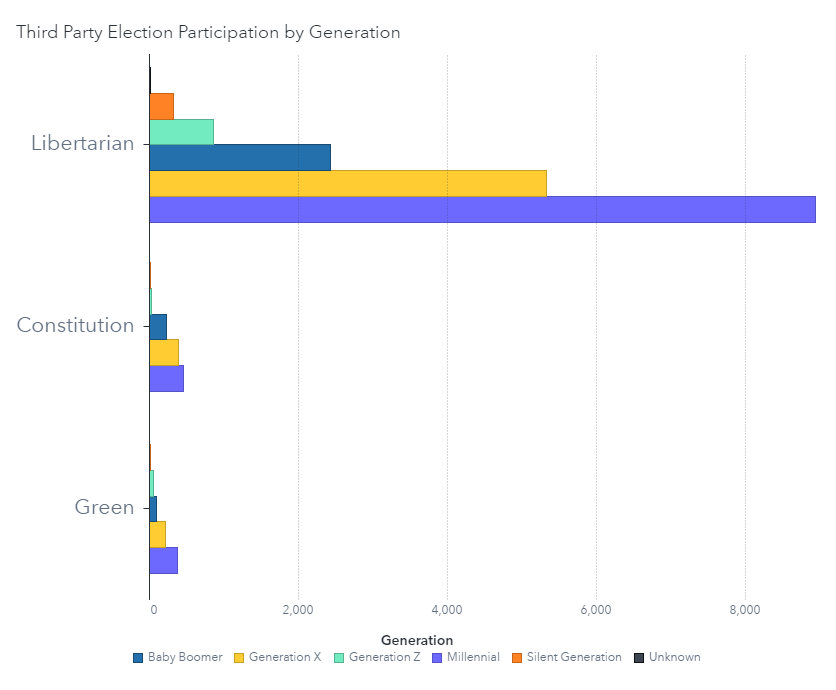 Every vote is important, but even more so in close races in swing states:

In the 2016 presidential election, almost 2.3 million people didn’t vote at all. This year despite the pandemic, there are measures in place to make voting easy, accessible, and safe.  Early voting starts on October 15 and runs through October 31 in North Carolina. Absentee ballots must be requested by October 27 and must be postmarked or returned in person by November 3.

If you aren’t registered to vote and still want to register, your final option is to do same-day registration at early voting sites from October 15 through October 31. You must provide proof of residence and attest to your eligibility. Your vote will be counted unless the county board of elections deems your registration invalid.

Make sure your voice is heard

I used SAS Visual Analytics to analyze and visualize the data from the North Carolina State Board of Elections to create the charts and graphs in this post.