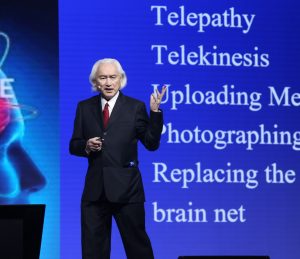 To say Michio Kaku is smart is an understatement. For a science fair in high school, he built a particle accelerator made of 400 pounds of scrap metal. Have you ever watched the TV show, The Big Bang Theory? Sheldon and Leonard support string theory research on the show. Kaku is one of the creators of string theory in real life. Not only that, but as a futurist, he assesses trends and boldly points in the direction he sees technology moving. At SAS® Global Forum, he let us in on what he’s seeing in his tech tarot cards.

Throughout history, Kaku said, the world has transformed through waves of wealth.

But what is the fourth wave?

Kaku predicts that the age of high-tech will soon come to a close. “Eventually, Silicon Valley will become a Rust Belt,” he said. “I say the fourth wave is at the molecular level.”

Data is the fuel of the coming age. Today’s raw data is the 1800s’ crude oil. He said the next generation is quantum computers, and these computers will affect everything from health care professionals to artists. The internet and Al are everywhere and nowhere. Already, internet glasses are used in operating rooms to show MRI scans and x-rays, and machines can spot cancer and Alzheimer’s disease at a better rate than human doctors.

“In the future, the word ‘tumor’ will disappear from the English language,” Kaku said.

How will this affect businessmen? Virtual reality won’t be just for video games anymore. Picture strapping on your glasses to jump into your monthly meetings.

Art and design? Computers will print out what you are thinking with a 3D image of the brain; intelligent wall paper will change on command. RoboDoc and RoboLawyer will give you information almost for free.

“In the future, you will be able to design and print your wedding ring,” he said.

What’s the point? Kaku said capitalism itself is changing. We are heading toward perfect capitalism, when the consumer knows everything about a product. We will have infinite knowledge of supply and demand: frictionless capitalism. With all changes this big, there will be winners and losers, he noted.

Who is going to work in the future? Three types of jobs:

“Congratulations,” he said, smiling, after noting that number three would be the most important of these jobs. The fourth wave will be led by AI, biotech and nanotech.

“Every industry will produce mountains of data,” Kaku remarked, and we can’t ignore it. In nearly every industry, you will have to digitize. You can bet your competitor will. And that’s where SAS comes in, with a tool box full of ways to bring answers to anyone with data.

What’s the best way to succeed and possibly become a billionaire in this new, evolving age? Pick an industry; identify the middle men; identify friction and waste in that industry; and use analytics and AI to digitize all this.

“Remove the middle man, remove all that and you, too, can become the next Amazon,” he said.


Ginny Inman loves telling people’s stories. Having studied at the University of North Carolina Wilmington and earned her master’s degree from North Carolina State University, she uses her experience to communicate through writing and video production for SAS’s internal communications team. She enjoys using creative communication solutions to build projects from the ground up for SAS employees around the world.