In The Force Awakens, when Poe Dameron, the self-assured pilot, said, “So who talks first, you talk first, I talk first? ..." I had a feeling he’d end up being a character I’d like.

When Poe had this interaction with Armitage Hux in The Last Jedi, I was completely sold on him:

I look forward to May, not for the spring weather, but because it gives me an excuse to play with Star Wars data.  I try to explore scripts from Star Wars movies every May the 4th, and this year is no different.  Finding the script for The Last Jedi proved much more challenging than any of the other movies I’ve worked with.

The Internet Movie Script Database is my typical go-to for all things scripts related, but they didn’t have one for The Last Jedi.  My husband, Adam Maness, fellow SAS employee and resident data guy took a jumbled partial script that I found, and spent hours watching, rewinding, and pausing the movie to make sure the data was accurate. In some cases he actually transcribed parts of the movie.

(Take note: if you haven’t watched The Last Jedi or previous films in the Star Wars series, there are some small spoilers in this post.)

Who has the most lines in The Force Awakens?

The first thing I did was run a frequency to see who did the most talking.  Not surprising, given his bit about talking in The Force Awakens, Poe led the charge.  Yes, the bars are the same color as Luke's blue lightsaber.  Visual Analytics provides the option to use custom colors in graphs.  I used the color picker tool in MS Paint to find the RGB values for the blue lightsaber from a screen capture, and here you have it! 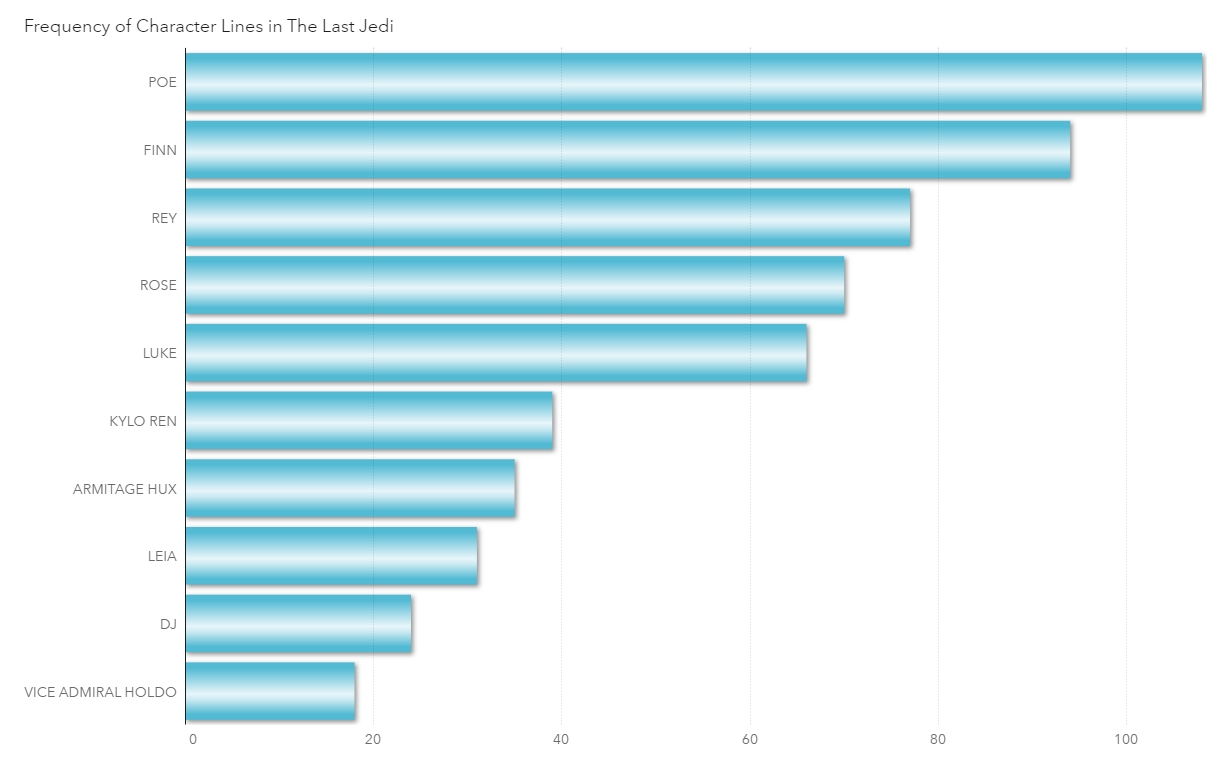 While I was watching The Last Jedi, my mind kept pulling together similarities with The Empire Strikes Back.  I know I’m not alone there.  Just like the parallels between The Force Awakens and A New Hope, it seems that The Last Jedi became a new take on Empire (with a little Return of the Jedi thrown in for good measure).  Poe was at the forefront of the battles while Rey was spending time with Luke honing her skills—much like Han charging into battle in Empire while Luke spent time with Yoda.  The originals were so good, I’m a fan of the nods to them in the newer movies.

Going beyond simple dialogue and frequency of lines, I wanted to run some quick text analysis in SAS Visual Analytics.  Visual Analytics offers an easy-to-use text analytics capability called text topics, which identifies topics that occur together frequently.  All it requires is a unique identifier and a text field.  In my data the unique identifier is the line number in the script.  I ran text topics on the data from The Last Jedi and The Empire Strikes Back.

Just like my analysis of A New Hope versus The Force Awakens, there are some text clusters that carry very similar themes, like the ones highlighted dealing with the protagonist/antagonist relationship and the epic lightsaber battles between them. 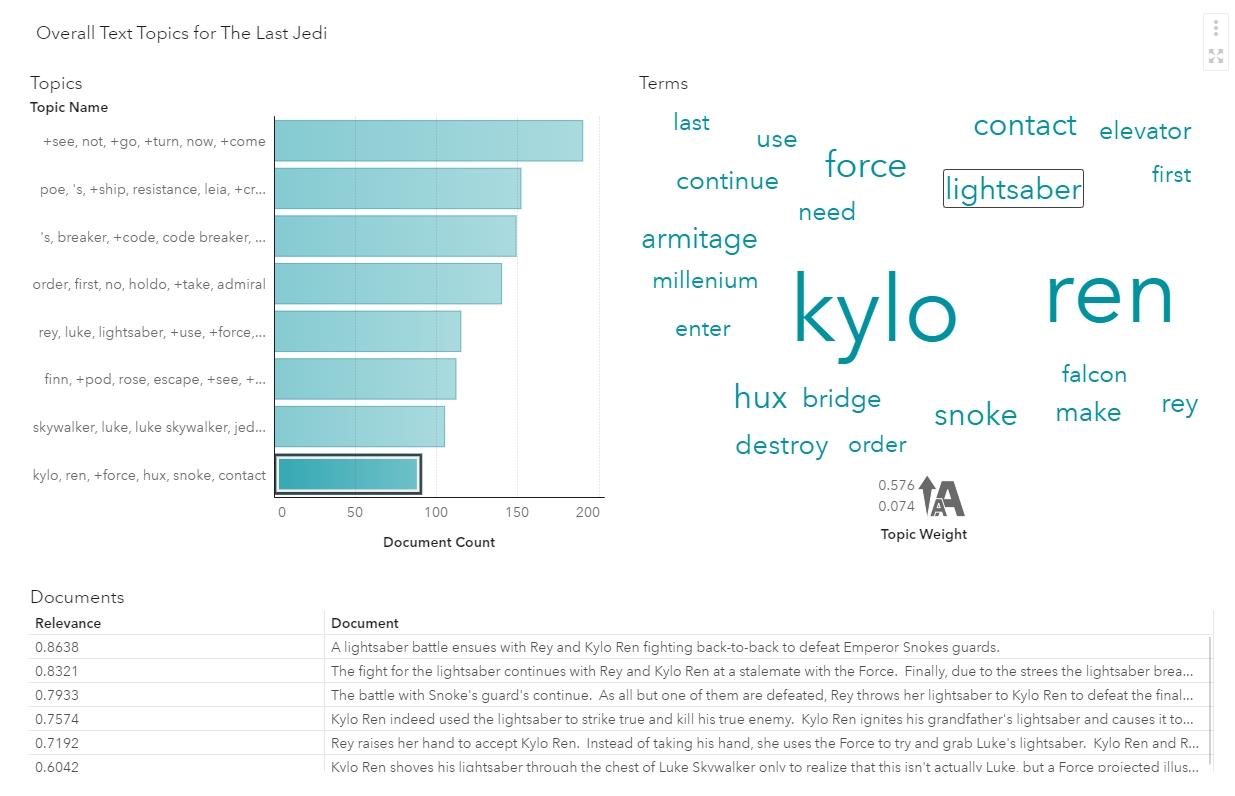 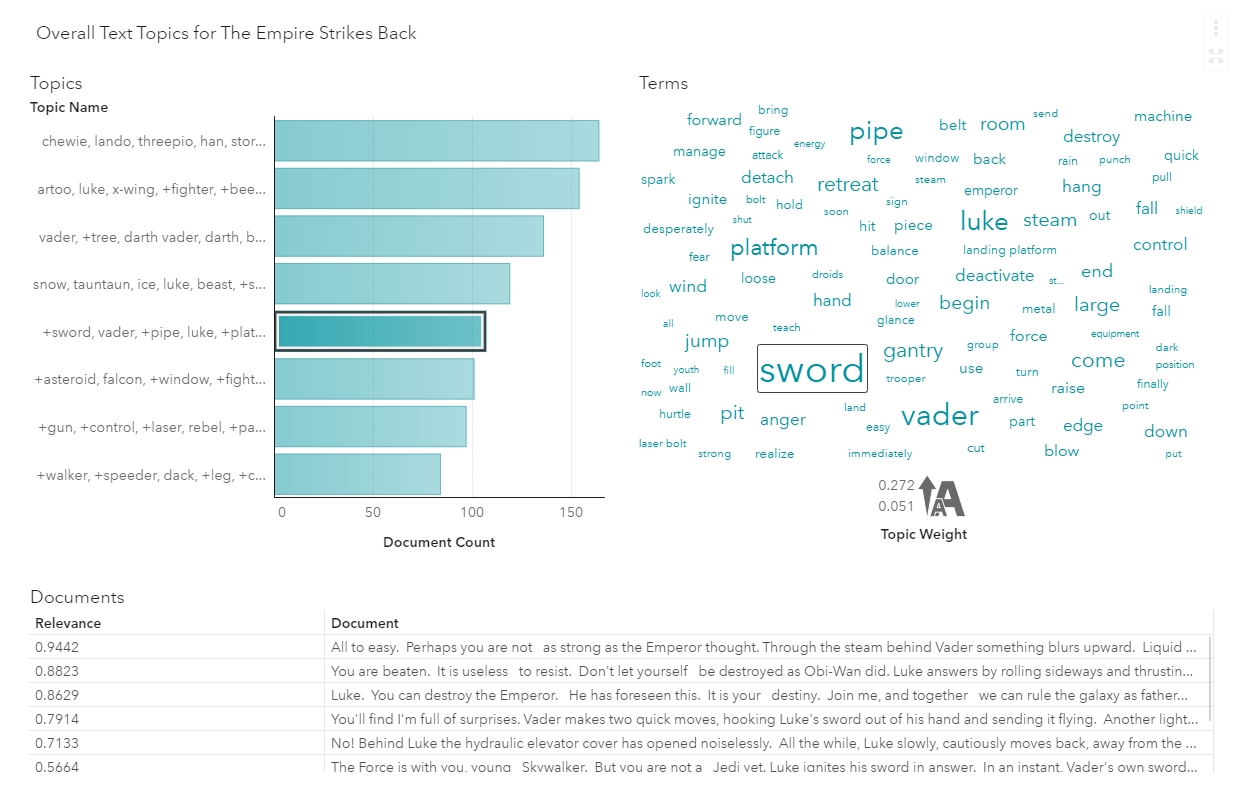 I used SAS Visual Text Analytics to explore the clusters and the relationships in more detail. I looked at a simple term map for Luke in the original trilogy and The Last Jedi and saw terms that are mentioned in the path to the dark side—fear, pain, anger, hate, along with words pointing to the dark side, Jedi, and family.  I built a small taxonomy so I could compare how those terms and their derivatives and synonyms might be used in both sets of data. 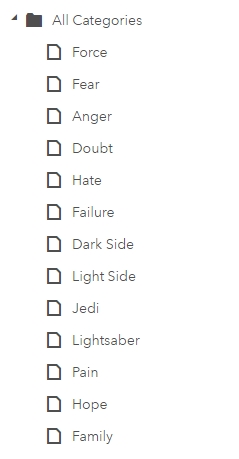 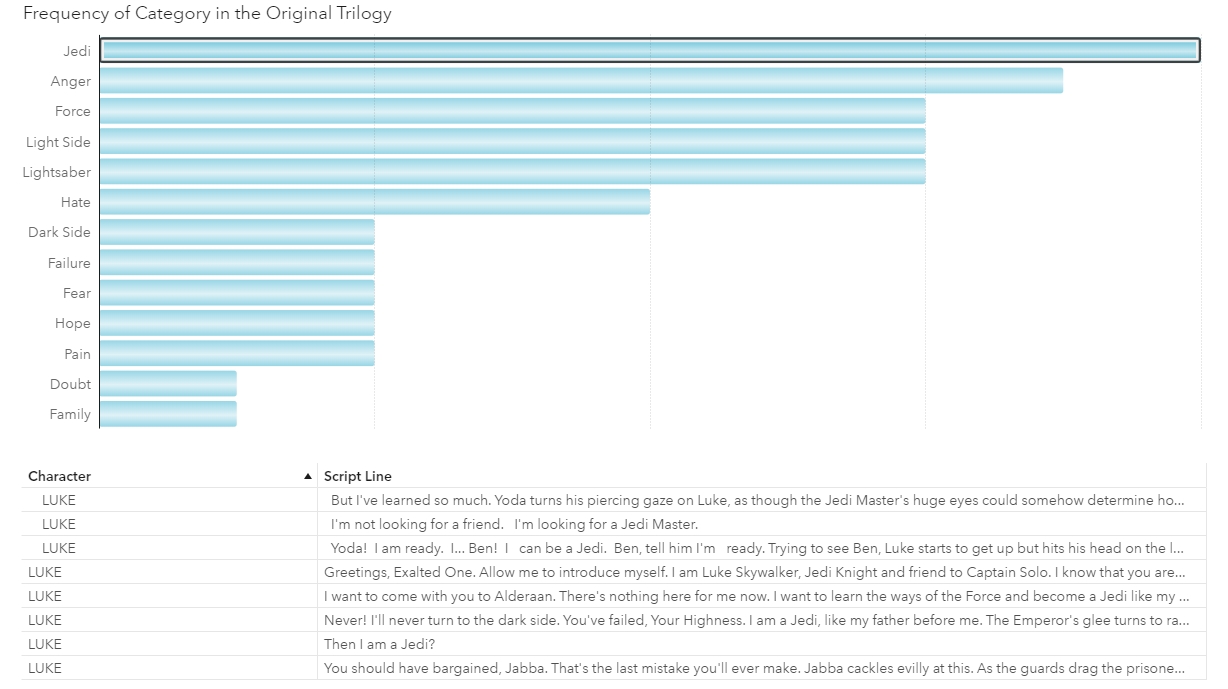 By The Last Jedi, Luke had learned that there were downsides to being a master, and that his arrogance levied a significant cost.  His experiences caused him to become a jaded recluse. 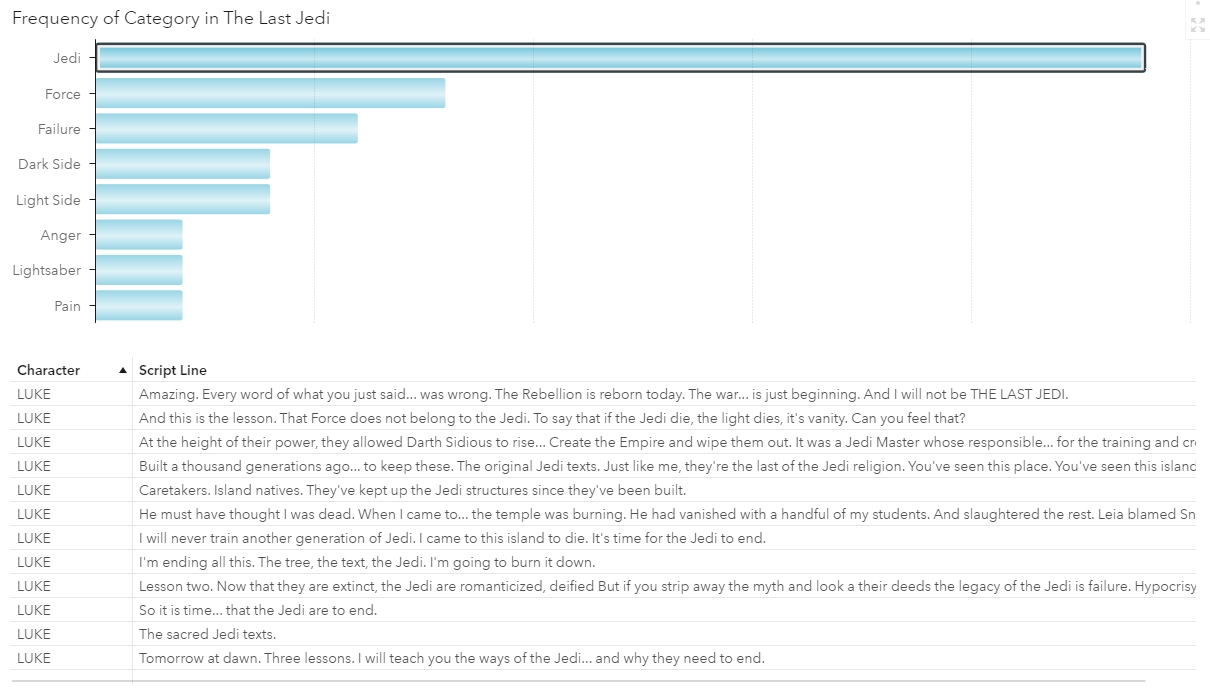 In the original trilogy, Luke was very much a student of the Force. 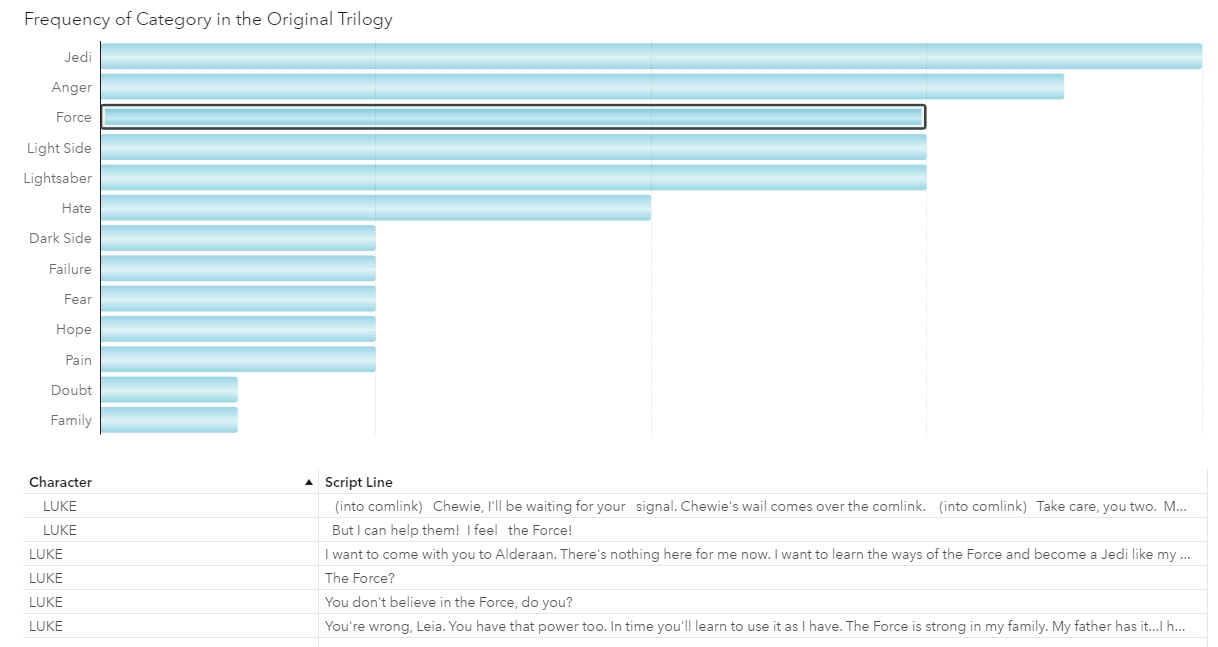 In The Last Jedi, he reluctantly took on the role of teacher.

What should I analyze next?

What have been some of your favorite Star Wars moments?  Are you looking forward to the new Solo movie?  Leave me comments, let’s geek out, and May the Fourth be with you!