A practical approach to blockchain analytics

What is blockchain and how can you analyze data in a blockchain? This article will discuss various forms of blockchain analytics from a tactical or heuristic perspective. I’ll explain how SAS® technologies can provide advanced analytics for operational, value/asset and regulatory viewpoints in the diverse world of open source blockchain technologies.

Let’s start with a few basic viewpoints to set the ground work of our discussion.

Blockchains are growing in popularity because they offer a way to conduct transactions without the need for a trusted third party. Transferring money, tracking goods and sharing legal documents are common uses of blockchain technologies.

For the purpose of this discussion, blockchains will be viewed as either public or permissioned/private:

From our discussion so far we can derive two categories of data for all blockchains.

Analyzing blockchain data on the fly

To demonstrate the power of capturing data in movement, better defined as a streaming approach, we developed a blockchain simulator using SAS Event Stream Processing. The simulator generates client requests into a miner process that are controlled by a consensus process. Both the simulator and consensus processes use the pub/sub APIs connected to the SAS Event Stream Processing model for managing blockchain updates.

Here is a workflow view of the implemented SAS Event Stream Processing model: 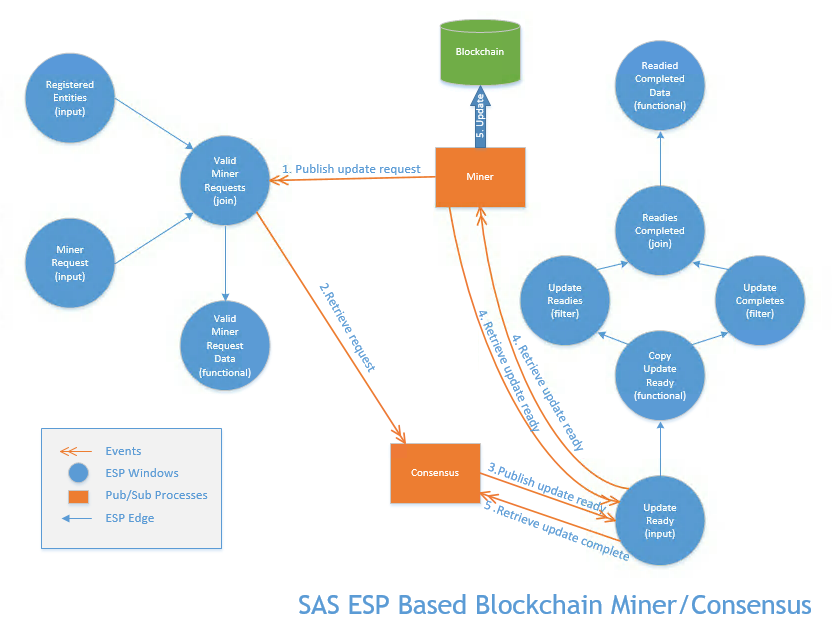 Adding a configuration window to the model provided a method to start, stop, pause and mute miners and dynamically change the blockchain update rate. Future enhancements will add deep learning at the miner and consensus process levels to automatically manage blockchain metrics such as block size and elapsed time. Running 30 miners at 850 millisecond blockchain updates were easily provided through the SAS Event Stream Processing engine. This is an ideal environment for performance in analyzing IoT projects.

What about analyzing data in a real, open source blockchain such as R3 Corda, Hyperledger or Chain? Well, once the processes for any blockchain are modified to generate the desired events, a SAS Event Stream Processing model similar (minus the consensus and configuration windows) to this simulator could be applied.

As blockchain technologies mature and IoT use cases become the bellwether for blockchain implementations, the need for higher speed block updates, processes and communications will trend toward stream-based composition. The demand for stream-based blockchain analytics technology, such as SAS Event Stream Processing, will prove instrumental to the overall success of blockchains.

Public blockchains in the cryptocurrency space are under significant pressure to address topics such as AML, KYC and fraud. With the advent of initial coin offerings and surging market value of cryptocurrencies, regulatory pressures are increasing all over the world.

SAS Visual Investigator addresses these concerns with a variety of intelligence analysis and management needs. It can reveal suspicious activity while performing fraud, security and compliance investigations. One of the key features is to import various forms of data, then define relationships and user interfaces specific to the imported data.

Interestingly, that first extract included a relayed by IP address. Using an IP location finder, we identified a longitude and latitude based on the given IP address. The data was aggregated, combined and imported into SAS Visual Investigator. By simply dragging and dropping the data into our case, we were able to show a network diagram of transactions and users, as well as a geographical map of the activity.

Extracting and aggregating Bitcoin input transactions was the challenging part of this case. Due to the anonymity of Bitcoin addresses, other than the known address, only patterns, amounts and possibly the location information added value to the investigation. But with a little work, it’s possible to access and include a variety of data from various blockchain technologies using SAS Visual Investigator.

Blockchain-based technologies will continue to expand into many industries and areas. The secure, decentralized essence of blockchain will make it a popular technology option for any system where security is important. From managing smart contracts to validating money transfers, expect to see many common uses of the technology.

As blockchain use increases, more organizations will need to access and analyze the data, even as it grows in complexity and volume. Moving forward, there may also be the need to offer analytics across multiple blockchain variants. I’m excited to work for a company that has anticipated the interest in blockchain technology and is already applying advanced analytics techniques in this evolving space. 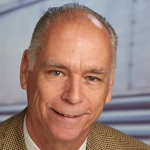 With 20+ years’ experience as a consultant and 30+ years developing software Sam has a true passion for programming languages and problem solving. Over the past 2 years Sam has worked in an emerging technologies group helping with integrating Spark with SAS, prototyping SAS product enhancements and over the last year has focused on Blockchain technologies and the integration of SAS from a data management, streaming and analytics perspective.