There are no limitations for what you can accomplish.

That’s the message Keith Poston from the Friends of the North Carolina Museum of Natural Sciences imparted to 300 middle and high school students, teachers and parents assembled this week at the museum for the fourth STEM Career Showcase for Students with Disabilities. The Showcase also was livestreamed to reach even more students. (STEM stands for science, technology, engineering and math.) 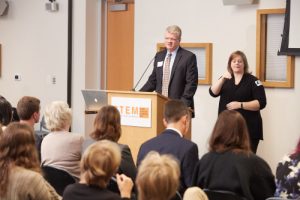 Poston set the stage for a morning of inspiring and motivational stories told by STEM professionals and college students who live with different disabilities.

SAS and JMP sponsor the event, which was the brainchild of Ed Summers, Distinguished Technical Leader in the Accessibility and Applied Assistive Technology Department at SAS. The event was also sponsored by the museum, IBM and the Bresler Foundation.The Women's Initiative Network from SAS supplied 18 volunteers who helped out at the event.

“The goal of the STEM Career Showcase for Students with Disabilities is to raise the student’s expectations of their own potential by providing concrete examples of adults with disabilities that are performing at the highest levels in STEM fields,” said Summers, who moderated a panel of NC State University students who discussed their disabilities.

Be a problem solver

An overarching theme of the event was self-advocacy, something Josh Miele, an Associate Director of Technology Research and Development at the Smith Kettlewell Eye Research Institute in San Francisco, addressed in his keynote.

“My interests have always been in STEM,” said Miele, who holds a PhD in Cognitive Psychology/Psychoacoustics from the University of California, Berkeley. “As a kid, I was always taking things apart and sometimes putting them back together!”

As a blind scientist, he found that every time he wanted to use a new scientific device, he had to figure out how he could access the tool.

“As a student who wants to succeed in STEM, the first issue is to be a problem-solver,” Miele said. “Students with disabilities and science and math go together because they’re about problem-solving and thinking about things in new ways.”

Although he originally wanted to be a space scientist, he soon realized that what he really had to offer was his ability to develop tools that people need in order to do science, math and other careers.

“I didn’t want those designed by someone who wasn’t facing those problems themselves,” Miele noted. “If you are going to design a sailboat, you better be a good sailor.”

Instead of pursuing a career at NASA, where he had been an intern, he got a job with a software company, developing screen readers for the visually impaired.

Over the years, he’s worked on a STEM pulse pen (that speaks what the camera sees on a page), developed a YouDescribe website to provide audio descriptions of YouTube videos and helped make the Bay Area Regional Transit system accessible for those with vision loss and impairments.

“Arduino is a cheap and very easy-to-use electronics tool being used in schools and robotics clubs to build devices and robots,” explained Miele, who wants to see blind kids working alongside everyone else in robotics clubs and learning from each other.

A culture of real accessibility

"If we have a generation of engineers and scientists who understand fundamentally what a disability is, then we will build a culture of real accessibility,” Miele said.

And it’s up to kids with disabilities to speak up. “In order to succeed, you need to be willing to try, to tell people what you need in order to succeed and you have to advocate for yourself and your needs,” Miele said.

“If you don’t have access to tools you want or need, you can build them yourself or collaborate with sighted people in order to do the things you want to do,” he added.

As he got older, Miele said he realized he was teaching everyone around him about how a blind person could achieve success. He encouraged the students in the audience to do the same.

"We are all teachers, ambassadors, about what we do and how we do it,” Miele said. “We are problem-solving together.” 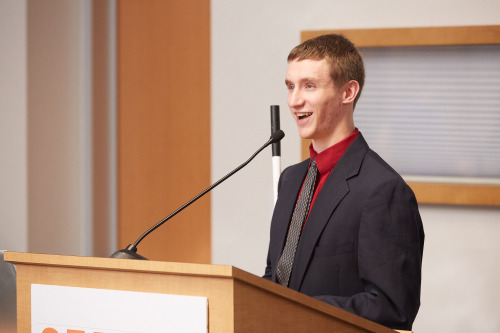 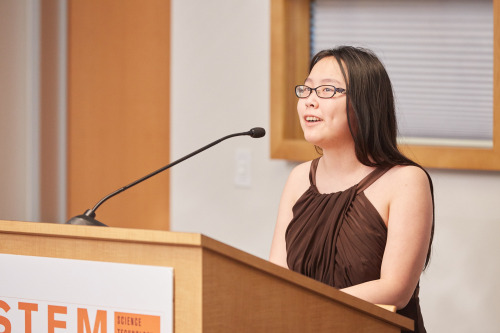 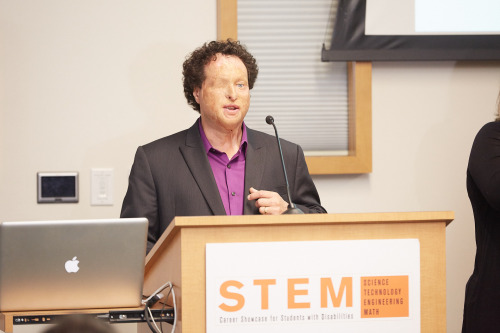 Students also heard the stories of Skynet Junior Scholars Tia Bertz from the Wisconsin School for the Blind and Visually Impaired, and Chris Mathews from the University of Wisconsin, Whitewater. Skynet is a global network of research-grade, internet-controlled robotic telescopes that operates out of the University of North Carolina at Chapel Hill.

Bertz told of her experiences at Wisconsin’s Yerkes Observatory, NASA’s Space Camp in Huntsville, Alabama, and at the AAS conference where she met researchers from NASA’s Fermi project.

“I want to analyze data and project what nebula and other space objects will look like in hundreds of years,” Bertz said. “I believe we all have greatness in us and our disability does not define us. If we dream it, we can do it. The world is our sandbox. What will you build?”

Chris Mathews, born at 26 weeks with a visual impairment and weighing less than two pounds, told of his experiences with Skynet, at Space Camp, at an engineering-focus summer camp in Baltimore and at a field study in Washington, D.C. where he interviewed members of Congress and ultimately decided to pursue a career in journalism.

“I may not be going into STEM as a career, but I still love and enjoy it,” Mathews said. “We all have challenges, things we have to overcome. I plan to push myself further. If you just try, be who you are, each one of us is able to touch the stars.” 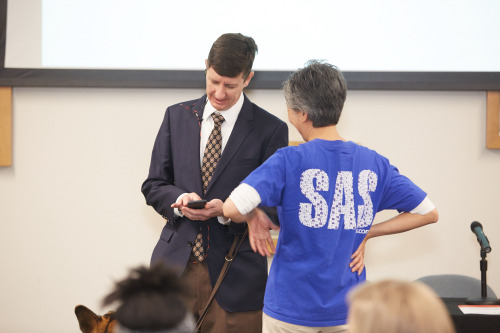 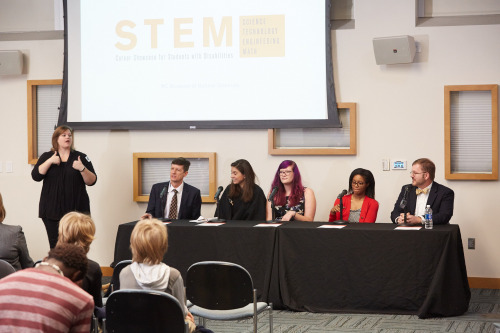 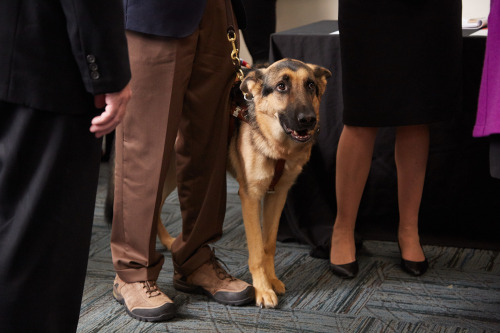 Summers’ guide dog Willow is always a guest of honor

In the second half of the showcase, Summers led a panel discussion with NC State students Christopher Boggs, Alexandra Grossi, Ciera Rankin and Maria Sable.

The panel discussed challenges surrounding their formal diagnosis and disclosure of their disability. Here are their responses when asked what was the one thing they wanted to share with the students: