Having a mentor is the number one factor in increasing the steepness of your personal learning curve. So says my oldest, Garik, a Park Scholar at North Carolina State University (class of 2012), during a discussion he recently had with the incoming Park Scholar class of 2019. 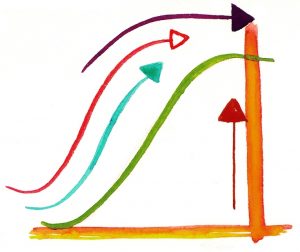 To accept the value of mentoring first requires one to understand the centrality and importance of the learning curve. Garik asked the students to imagine plotting the characteristics of two people on a simple X-Y axis.  Person A comes to the game with only a moderate amount of resources at their disposal, but importantly, also a relatively steep learning curve, such that a plot of their capabilities has them crossing the Y-axis at an intercept of 1 and with a slope of one-half.  Person B, in contrast, has much greater resources at their current disposal:  time, talent, smarts, money, education, experience, etc …, but for whatever reason, has a shallower learning curve, such that their plot on the graph intercepts higher up the Y-axis at 2 but with a shallower slope of only one-quarter.

Unless you think you’re going to die before the two lines cross, you’d of course be better off as Person A. Based on his domestic and international experiences as an undergrad and grad student, as a researcher and an employee, and as part of two start-ups (so far), Garik’s conclusion is that, while there are several factors impacting the steepness of that learning curve, none is more important than that of having chosen good mentors.

Businesses can be said to have learning curves as well, and my discussion with my son got me to thinking about what factors would have the greatest bearing on organizational learning curve steepness.

Aside from the converse of the above (i.e. information hoarding / keeping employees in the dark), what specific factors might work in the reverse direction to inhibit and flatten the learning curve? A few that come to mind include:

As for mentoring, I think it’s remarkable that 18 year-olds today are so open to the idea. I don’t believe the term, or my first true mentor, entered my life until my late thirties.  Although to be honest I have to admit that, despite the positive impact it would have had on my early college self, I was likely too much of a go-it-alone, do-it-all-myself person at that age to have much benefited from someone’s efforts on my behalf.  It’s not so much about lack of teamwork, but about being willing to have someone you trust with your best interests at heart to give it to you straight-up and unadulterated.   Come to think of it, organizational mentorship couldn’t hurt either – external board members and consultants constantly challenging your assumptions and strategies.  Maybe mentorship is the number one factor affecting the steepness of the organizational learning curve as well – the one core competency and differentiator under your control.