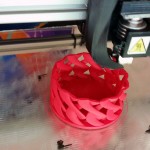 By now, you’ve probably seen a video of a 3D printer discharging layers of plastic to create a model of a building or a plastic figurine. You may have heard stories about 3D printed guns, 3D printed airplane parts and even 3D printed body parts.

While 3D printers are becoming more common, they are still a long way from being common household or break room devices.

How will 3D printers be relevant in the field of analytics? And what are their true strengths? We asked Matthew Horn, manager of SAS’ Emerging technologies UI lab for his thoughts – and here’s what we found out.

3D printing is a method for creating physical objects or models by “printing” multiple thin layers of materiel successively to form an object. 3D printers can easily print intricate shapes and interlocking pieces.

3D printing is not a standalone design process. The objects that are printed are first created and designed in a software program that connects to the printer and tells it what to print. It’s also not a replacement for complex manufacturing technologies. In most cases 3D printing will complement rather than replace existing manufacturing processes. This could change as the technology matures, but that’s still several years out.

3D printers work like ink jet printers, except they are loaded with different types of plastics instead of ink, much like a hot glue gun. Unlike an ink jet that prints on a single sheet of paper with a standard thickness, the 3D printer’s print head also moves vertically, allowing it to build very thin layers of its “ink” or plastic, one on top of another. Each layer is only slightly thinner than a sheet of paper at 0.2mm or 0.0078 inches, and each layer is stacked on top of the last layer to slowly build an object. The plastics in the 3D printer are heated to about 200°C (or 390°F), which allows the plastic to flow like ink. The high temperature also causes each layer to fuse with the previous one, making a solid piece.

The possibilities are really quite limitless, but common uses including 3D printing of rapid prototypes, replacement parts, robotics parts, computer parts, toys and figurines. At SAS, we have used the 3D printer to create a model of the Hubble Telescope and the James Webb Telescope for educational purposes. We have also experimented with 3D printing on paper to create three-dimensional visualizations to better reflect variance in data and for users who are visually impaired.

3d printing is still slower than traditional manufacturing when mass producing many objects. The costs of the 3D printer and associated materials, while not outlandish, are still outside the price range for many businesses and individuals.

Yes or no? The bottom line for 3D printing and analytics

The biggest relationship between 3D printing and analytics will be in the design phase of the 3D printing, not in the output. Computer-aided design, computer-aided engineering and computer-aided manufacturing are all processes that generate a lot of data. As more robotics and engine parts are created with 3D printing, for example, analytics will be essential for quality assurance and testing. We also anticipate an Internet of Things angle as more 3D printers become enabled with connectivity and transmit data that can be analyzed for multiple purposes.

For more, read the past posts in our tech for the future series – or check out our manufacturing blog, Made in ... Analytics.