We often hear from retail bank customers that they aren't satisfied with the revenue captured through digital channels. It was therefore with great interest that I embarked on the mission to understand Chris Skinner’s book Digital Bank.

Why we need digital banks

The book starts by painting the landscape of the digital natives. We need digital banks because there is this generation called Generation Z, generation D, iPops, or whatever you like to call them, that has grown up with the Internet. This is the generation that does not think about the Internet – it’s just there. They don’t think about branches or call centers. They see a world in which online, mobile, and other digital channels are seamlessly integrated into their world. They just think of these things as life.

The problem? While the world becomes populated by digital natives, retail banks are run by digital aliens, who do not get the digital life.

Banks certainly think about this new digital world. But from their first day on, they have been thinking in branches. So "digital" is just another channel for these banks. Each channel is added as an extra layer on the foundation of the branch network. This is why banks talk about multichannel and omnichannel strategies, in which they try to integrate their callcenter channel with their internet channel. And this is exactly what Skinner sees as the biggest problem, because banks have just one channel, the electric channel, that provides the foundation for all end points: mobile, phone, internet and branch.

The big challenge is that banks should stop thinking of channels. Instead, it’s time to think about banking as a digital network, an electronic structure, with physical channels on top.

How to design a digital bank

What the banks did wrong, is that they started building years ago with physical structures. And now they try to find a way to combine the physical world with the digital world. However, Skinner tells us, they should start thinking and building again from scratch, with the one channel they have: the electric channel.

Just because the bank is digital doesn’t mean that it has to be automatic and robotic. In fact, it means the opposite: it must be a human bank – the bank must really understand its customers and the human interaction with technology. According to Skinner, this is the secret sauce that makes digital banks of the 21st century far more competitive than the banks that simply add the technology as an extra layer to their branch operations.

One example is combining location-based services with data to better understand the customers’ needs, wishes and challenges. The point is that the customer will no longer be reaching out to the digital bank; the digital bank will need to reach out to the customer by being relevant at their point in life. This follows the fifth wave of mobile adoption, which means that everything in the Internet of Things communicates to find you. This fifth wave will come in the near future.

The fifth wave will change the customer relationship dramatically. In fact, it has changed already. The first change was from one-to-one in a human, physical way, to one-to-many. Now it is digitized, one-to-one. As we try to manage remote relationships leveraged through mass personalisation, big data comes into play. Mass personalisation can only be achieved by offering contextual services to each and every customer at their point of relevance. This requires analyzing tremendous amounts of customer data to identify what contextual service customers may need at that particular point in their lives. Bank retailing will be based on the competitive differentiation of analyzing masses of data to deliver mass personalization. When you analyze all the customer data, you can provide personas for each customers’ user experience with the bank, in a way that suits the customer. The customer designs the bank for them rather than the bank desiging a one-size-fits-all experience for customers.

Currently, a technologies storm is raging in the banking world. Mobile networking, social technologies, data analytics, and unlimited networking, storage and modular computing are all moving rapidly. Data is the future competitive battleground for banks. Actually, it is already the battleground today, but only a few banks realize this. The banks that do realize this will move towards data being their most critical asset.

The money is in the data. An effective way to make information from the data is data mining: digging deep to find new relationships and insights in fragmented pieces of data. Mining and combining data will be the future of digital banks.

In short, banks should begin to build themselves over again from scratch, with the digital architecture being the most important consideration. They should focus on the customer and the employee, how can they define the processes in order to understand and support both of them. The world will soon be populated solely by digital natives and if you want to have a role as a bank in that world, you should start transforming right now and start seeing data as your most important asset. The ability to make information from data is key to making your transformation to a digital bank a success and to be ahead of the competition.

There are not many banks who have realized this yet, so for the gross of the banks there is still a lot of work to do. But one thing is for sure: we will need to transform towards digital banks. 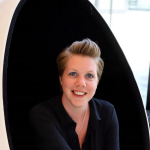 Anne Belder has worked at SAS since February 2013, where she specializes in Digital Marketing and Account Based Marketing in the Benelux.