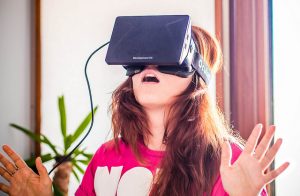 Excitement and wonder about the acquisition has arisen from all different corners, but one of the most interesting and foretelling reactions came from Shuhei Yoshida, President of Sony's Worldwide Studios for Sony Computer Entertainment, Inc: ""I woke up that morning and saw the announcement and  I was like, 'yeah!' For me, it was a validation for VR."

Like Oculus, Sony has plans to bring a VR headset to the market. Sony's hardware, called Project Morpheus, will work with the PlayStation 4. Both efforts have been focused on gaming, but Facebook has made it clear that it is looking at non-gaming applications for VR in the future. Mark Zuckerberg said in the announcement of the acquisition that he sees a very broad future for VR: "This is really a new communication platform. By feeling truly present, you can share unbounded spaces and experiences with the people in your life."

At SAS, we see the non-gaming potential as well. in January, a few weeks prior to the Oculus acquisition, sascom magazine featured my article "Using virtual reality to understand big data" where I discussed how VR headsets like the Oculus Rift could deliver data insights like never before.

In some cases, virtual reality can be augmented, just like Google Glass augments physical reality. When Sir David Attenborough delivers a nature documentary about Borneo for the Oculus Rift, he could easily augment the landscape with relevant charts and other data visualizations. Any type of virtual world experience could be augmented in this way.

But we don't have to be constrained to traditional data visualizations on top of traditional virtual reality. Behind any virtual world is a ton of streaming data. For video games, the scenes have been produced by teams of artists, and the data is for art's sake. But what if all of that data was just data -- data for data's sake? Then you have a "data world," a world made out of your streaming business data that employs the techniques of virtual reality, but without simply virtualizing physical reality. With this approach, you could really fly through all that big data.