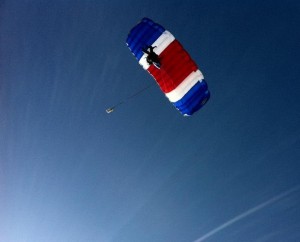 Why do we consider skydiving risky?

I asked a Nuclear Engineering Professor friend of mine, after the Fukushima power plant disaster of March 2011, whether that incident would have a positive or a negative impact on his industry.

His response was that it would have a short-term positive impact as a result of publicity generating a flurry of requests for inspections and re-evaluations of existing establishments. The long-term effect, he related, could be a public who is less receptive to the concept of nuclear power generation. This did not surprise me, given how Germany decided, immediately following the incidence, to cancel all pending projects, shutdown eight plants and phase-out all functioning nuclear power plants by 2022.

My friend then proceeded to say that the prospect of dying due to a nuclear power plant incident is much lower than the prospect of dying in a car crash. He was puzzled by the lack of statistical understanding on behalf of the public. His remark left me a bit confused. I knew he was right, after all he is the subject matter expert, yet I wondered why, against the odds, I never minded the sight of my car on my driveway yet I’d cringe at the sight of a giant hyperboloid chimney from my backyard?

As I was reflecting on this, I remembered what the head of a bond trading desk at one of Wall Street’s top firms had once told us as he was introducing us to the concept of volatility and risk management. He told us to always remember that risk is both asymmetric and subjective. To illustrate, he gave us the example of him deciding against the sport of skydiving. He said that, statistically speaking, skydiving is safer than driving (some statistics can be found here), yet, since he had a pretty good life and loved his family, the thrill he would get from a 60 second dive is too minuscule compared to the potential loss he could inflict on his loved ones.

The expected payout of a game of chance is calculated by multiplying each possible outcome (positive or negative, i.e. sign included) by its probability of occurrence then summing up. If you pay $1 to roll a die once and gain $5 if you roll a 6 then that is a losing game ($5*1/6 - $1= -$0.1667). That was easy. The trouble is with games of chance that involve a hard to measure quantity such as thrill, pleasure, pain and suffering.

Let us, at least hypothetically, try to assess the payout of skydiving. If one has a great life, then the marginal thrill one gets from each additional activity quickly diminishes. Let us say that a normal person’s life affords that person a level of pleasure of 1 unit per minute. Sky diving can multiply that pleasure by 1000. A person who has a very happy life is 10 times happier than the average person, i.e. his life style affords him a level of pleasure of 10 units per minute. Assuming a fatality rate of 1/100,000 and a lifespan of 80 years, our 45-year old trader’s payout on a minute of skydiving is thus,

To him therefore it is a no go activity. For our hypothetical average person, however, the payout is

This can be thought of as an acceptable risk to take.

Although the prospect of dying in a car crash is generally assumed to be 1 in 6,000, very few people refrain from driving on such grounds. The reason is that the utility of driving greatly enhances the quality of life to the point that the small negative payout due to the prospect of a car crash can be ignored.

As the sky diving example shows, the payout of a game of chance can be, as my friend the trader has indicated, both asymmetric and subjective. To properly evaluate the expected payout, second order effects have to be taken into account. For example, a die rolling game in which you pay $1000 to play and get back $6010 if you roll a 6 is has a net positive expected payout ($6010/6 - $1000 = $1.6667). Now suppose that you never had the $1000. You instead borrowed the money from the casino for a fixed term of one year at 12% interest rate. The game in this case has a net negative payout ($6010/6 - $1120 = -$118.3333); a significantly different profile. I wouldn’t venture into a situation where you had to pawn your spouse’s jewelry to play the game. Second order effects of risky outcomes are highly subjective (vary from entity to entity) and has to be taken into account.

Risk asymmetry and subjectivity are nowhere more visible than in comparing individual vs. aggregate risk. Some examples may help clarify the idea. A power company with a failure rate of 1 in 100,000 looks pretty reliable. This translates to two minutes of down time every six months. If the average customer is satisfied as long as power outage does not last longer than 20 minutes, the company’s annual customer satisfaction rate is around 100%. On the other hand, if you own an internet colocation business and any power outage can cost you your entire business, then the seemingly reliable power supply is totally unreliable as far as you are concerned.

In the same vain, the national cost in life as a result of a small war may seem acceptable as a percentage of population. For a military family, however, the loss is detrimental.

This brings us back to the nuclear reactor safety issue. Serious nuclear accidents are rare (no more than 1 in 3000 annually). And when they happen the loss of life is no more than a few thousand lives (long-term effects included). For a nation of 300 million the risk per individual is less than is less than 1 in 150,000,000 annually per reactor. On a national level this is small enough to make it publicly acceptable. Once built, however, the ten-year risk for those living within a few miles from a reactor jumps to 1 in 300. Would you still live near one?

Here is a very illustrative example. In an interview broadcast on NPR on November 8, 2012, Melissa Block asked Ron Morano, chief spokesman for Jersey Central Power and Light, about continued power outages nearly two weeks after Sandy and the subsequent Nor'easter. His answer was that things should be viewed in perspective, the company was able to restore power to around 93% of its customers, and what remained were '...the last pockets of customers...'. Now 93% performance should earn you an 'A'. That is, unless you are graded by one of those last pockets. The grade in that case would be an 'F'. Or, in the words of mayor Ken Short of the Washington Township, "I'm totally fed up by your company, their total lies and lack of service. All they do is supply power and can't even do that right.".

When evaluating the acceptability of risk one has to take into account all plausible alternatives, as well. If the only alternative to living near a nuclear power plant is certain death by freezing in a Siberian forest, then the risk associated with a nuclear disaster may start to look acceptable. Thus, before hopping on your Beemer to go to work on a rainy day, see if there is a train that can get you there. Just kidding!

To summarize, one of the hardest things for humans to do is resist the herd mentality. But this is exactly what proper risk assessment requires, since the risk profile of a mass of people could be entirely different from the risk profile of the individual. It should come as no surprise however, that improving an individual's risk profile reduces the collective fragility of the whole group as well.