Sometimes you might wish to display only one triangle of a correlation matrix. If you search the web for 'SAS triangle correlation' you will find some ad hoc solutions. This post shows more general solutions that rely on the ODS document, table templates, and the FILE PRINT ODS= statement in the DATA step. Of course, you can also use a graph. The following step displays a correlation matrix and outputs it to an ODS output data set. 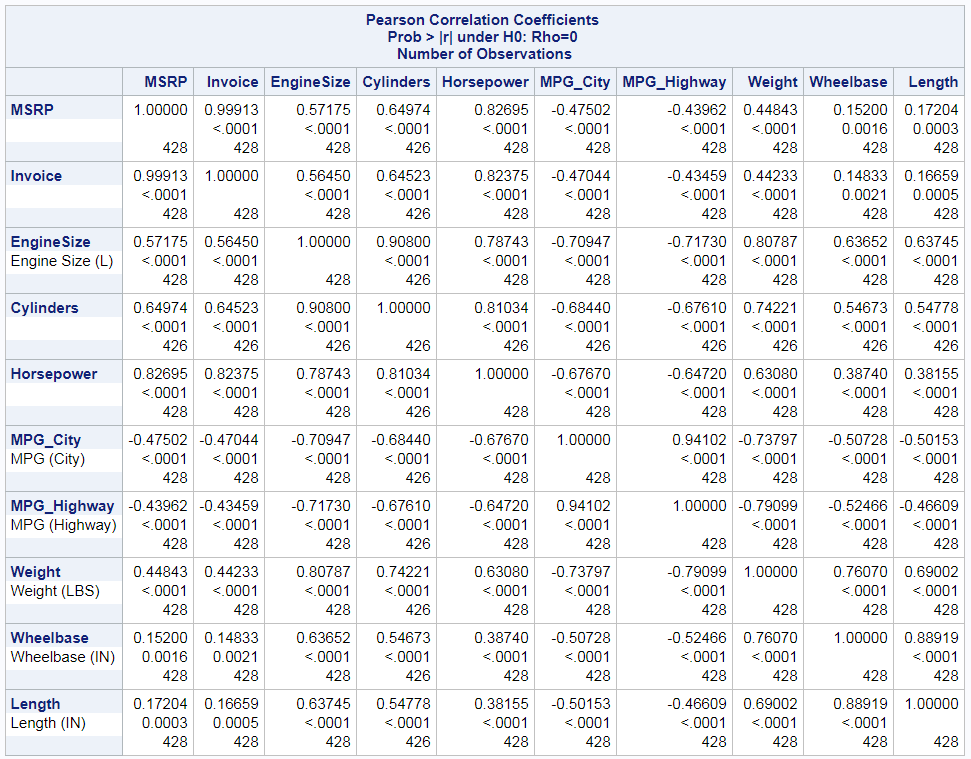 This is the output that comes directly from PROC CORR. It displays a stacked matrix consisting of the correlations, p-values, and the ns for each correlation. The first column contains variable names and labels. The column headers contain variable names.

The following DATA step displays the lower triangle of the correlation matrix.

Nothing in the DATA step is specific to the input data set. The only part that is specific to the PROC CORR step is the name of the ODS output data set, P. The DATA step does two things. It modifies the correlation matrix so that all values on or above the diagonal are set to an underscore missing value. The template has a TRANSLATE statement that displays blanks in place of underscore missing values. The results from this data set modification are stored in the data set P2. The DATA P2 step also generates a second DATA step (a DATA _NULL_ step) that contains ad hoc rendering code that displays the modified matrix. The information needed to generate the rendering code is entirely contained in the ODS output data set. This enables the DATA P2 step to be general, whereas the generated code is ad hoc. In this example, the DATA P2 step uses CALL EXECUTE statements to generate and run the following DATA _NULL_ step (reformatted from its original form).

The rendering code specifies the mapping between the template column name Rowname and the data set variable called Variable. This variable provides the row headers, which match the column headers, column names, and original input data set variable names. Since the columns of a correlation matrix cannot be known until the procedure runs, the columns are designated as GENERIC in the template column definition. The ODS template has a single placeholder column named Matrix for each correlation matrix column. The rendering code declares the mappings between the template generic column and the variables in the data set.

Notice that the DATA P2 step generates the P2 data set that is read by the DATA _NULL_ step. The DATA P2 step along with the DATA _NULL_ step that it generates display the lower triangle of the correlation matrix and nothing else. You might instead want to display the correlation matrix in almost the same form that PROC CORR does, but without the upper triangle. The next steps show you how to do that and how to change the style for the row label to RowHeader, so that the labels have the same light blue background as the variable names when displayed in the HMTLBlue style.

The ODS DOCUMENT statements open and close the ODS document, which stores all of the displayed information (tables, graphs, titles, footnotes, headers, after notes, and so on). The NAME= option assigns the document a name, and the WRITE option discards any information that might previously be in that document. I have frequently written that you can use the ODS document to capture dynamic variables and use them to recreate a graph. You can do the same thing with tables, but you will use a DATA step to recreate the table rather than using PROC SGRENDER to recreate the graph. You can use PROC DOCUMENT and the LIST statement to display the contents of the document. 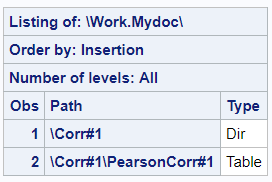 Then you can copy the path for the correlation matrix from the listing of the document and paste it in an OBDYNAM (dynamic object) statement. The following step creates a data set called Dynamics that contains the names and values of the dynamic variables.

You can edit the dynamics. This step changes the title dynamic variable so that the Greek letter rho is displayed rather than "Rho".

The following step edits the template that controls the row label and adds the STYLE=ROWHEADER option.

The following step sets the upper triangle for all three matrices (correlations, p values, and frequencies) to underscore missing and generates and executes code to display the table. 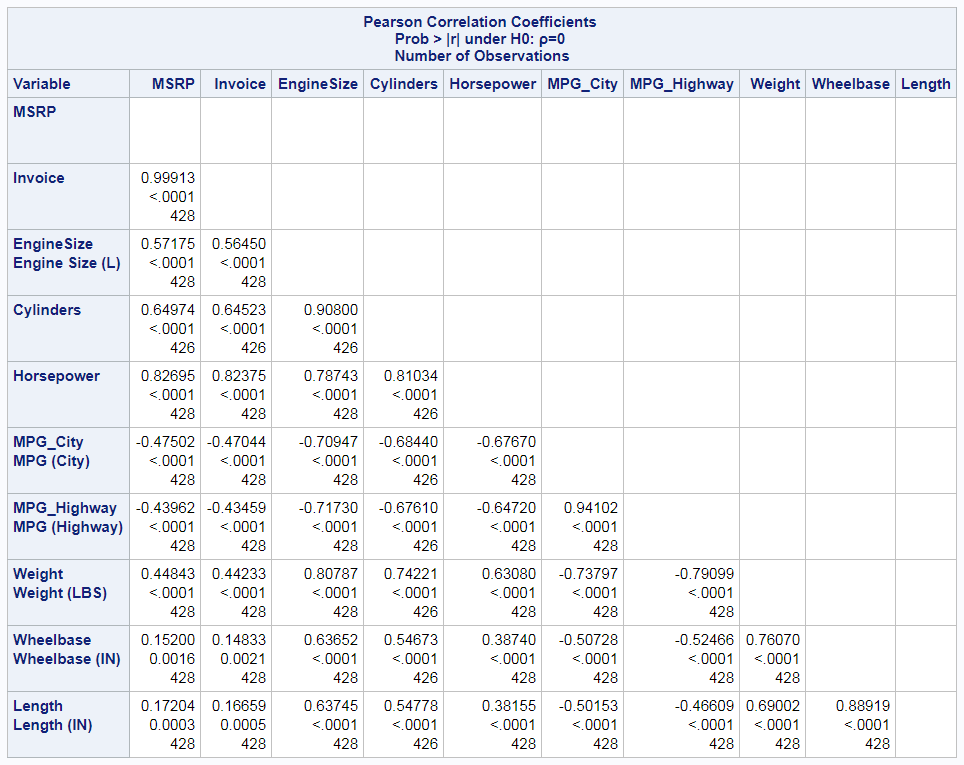 Much of this step is similar to the simpler DATA step shown previously, but now there is more code. Rather than setting one upper triangle to upper missing, we now set up to three to missing. The ODS output data set has up to three sets of numeric variables. The first set contains the correlations, and the variable names match the original input data set names. The second set contains the p values, and the variable names consist of the prefix 'P' followed by the original variable names (truncated if necessary). The third set contains the frequency counts when the frequencies are not all the same, and the variable names consist of the prefix 'N' followed by the original variable names (truncated if necessary). The stacked matrix template displays these three sets with corresponding rows stacked on top of each other. Now instead of one CALL EXECUTE statement that maps the generic column Matrix to all of the correlation variables, there are three CALL EXECUTE statements that map up to three generic columns (Matrix, Matrix2, and Matrix3) to up to three sets of variables. Furthermore the correspondence between the variable Label, which contains the original data set variable labels, and the template column is added to the same CALL EXECUTE statement that specifies that Variable is the variable that corresponds to the RowName template column. In the middle, a DO loop specifies the names and values of all of the dynamic variables. Temporary variables all begin with two underscores. This makes them easy to drop and minimizes the chances of them conflicting with variable names in the input data set. The DATA step generated and runs the following code, which I have reindented.

The following step uses the same ODS OUTPUT data set from PROC CORR, p, and displays the lower triangle, dropping the first row and last column, which are blank. Assume that the HTML destination is open from previous steps.

This DATA step contains two IF conditions, IF NOT __EOF THEN and IF _N_ NE 1 THEN, that drop the last column and first row,
respectively.

Most tables in this post are displayed in the HTML destination using the HTMLBlue style. This one uses PDF and the PearlJ style.

You can remove the column headers and instead place the headers in the diagonals by modifying the template and using the CELLSTYLE statement to change the appearance of the diagonal.

You can display the upper triangle instead of the lower triangle by replacing the first DO loop by the second:

You also need to skip the last row and the first column (instead of the first row and last column). The following steps change the format, display the upper triangle and use the %Paint autocall macro to display larger absolute values in red and values near zero in cyan.

The %Paint autocall macro generates a data set that contains a list of values (in this case in the range -1 to 1) and a list of colors that correspond to those values. You can use this data set to construct a format that can be specified in the template. ODS uses this format to control the colors of the values. Using the same modified template, you could instead interpolate from black to white via shades of gray for display in a black and white publication.

You might choose to display variable labels when they exist instead of variable names.

This step also omits the first (blank) row and the last (blank) column. The main part of the DATA step that is new is the DO loop near the end. It reads all of the names and labels and generates a LABEL statement in the DATA _NULL_ step that assigns the variable labels. This statement assigns a null label ("00"x) to the variable Variable so that no header is displayed for the first column. The DATA P2 step generates and runs the following DATA _NULL_ step.

While I do not recall ever seeing anyone do this before, you can display the p-values in the upper triangle and the correlations in the lower triangle. Begin by storing the number of variables in a macro variable.

Since the correlations and p-values need to use different formats, we need to store the formatted values in a character variable. This means we need a new template.

The RowName column is the same. Now Matrix is a generic character column that is right justified. The template has a custom header for this example. The following step modifies the data set, generates the rendering code, and runs it. Now, there is a new character array, __c. Values from the first two sets of columns are formatted into the character array. The rendering code is modified to use those character variables. The original names appear as row and column headers.

Obviously, this post is more concerned with ODS than with ODS Graphics. However, you can also display one of the triangles in a graph. The following step extracts one triangle of the correlation matrix and stores it in a form suitable for making a heat map. The variables Row and Col contain the row and column coordinates (both variable names) for discrete axes. Double underscores are again used to make the code reusable while minimizing the chance of colliding with input data set variable names.

The following step creates the plot. 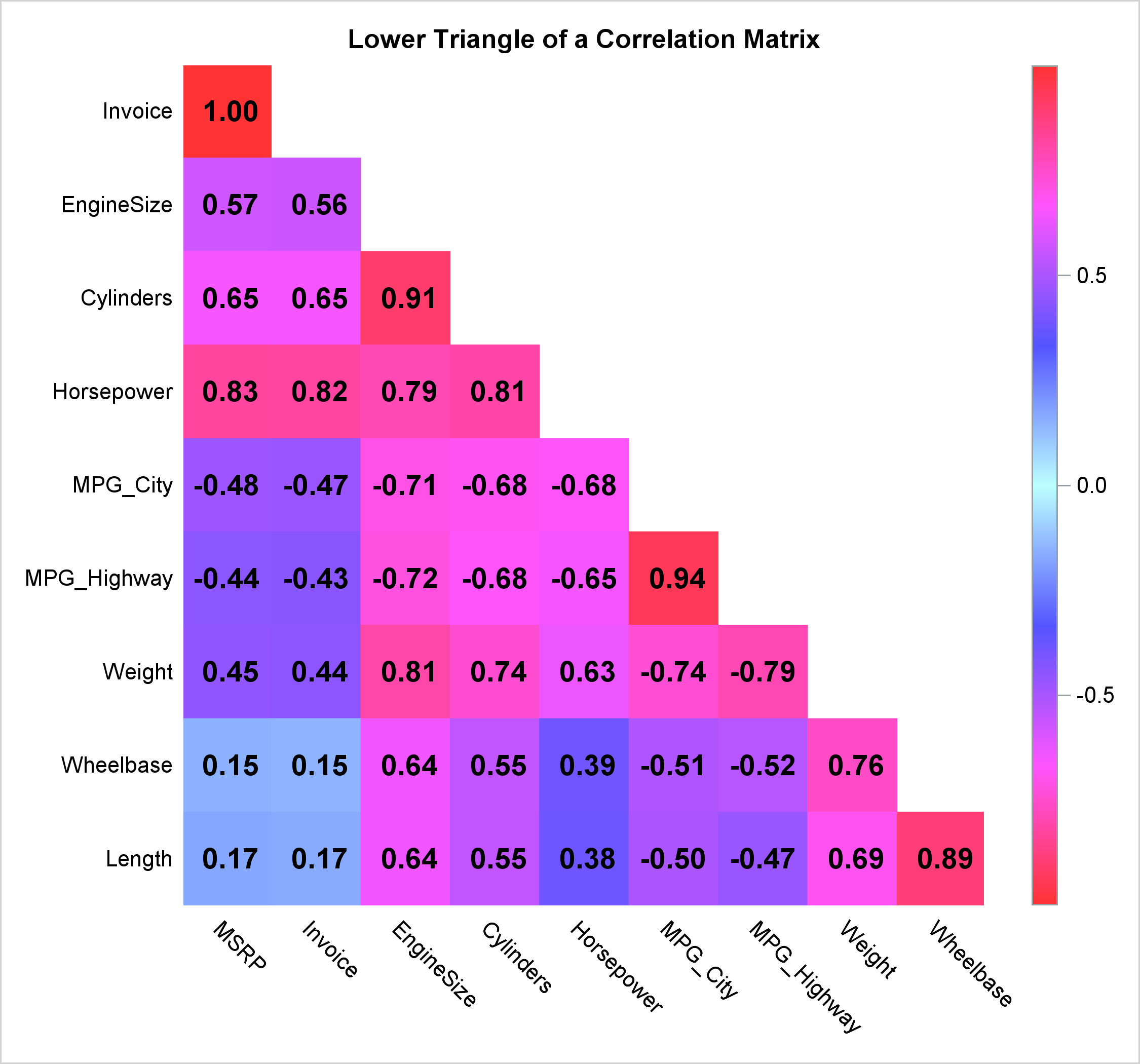 In summary, there are many ways to post-process tables that analytical procedures display. By using ODS OUTPUT, template modification, dynamic variables, DATA steps, and CALL EXECUTE, you have a great deal of freedom to customize your results. If I did not show precisely the customization that you like, you can extract pieces from the other customizations to create even more types of tables or graphs.