Users have often expressed the need for more marker symbols.  ODS Graphics supports over  30 scalable marker symbols, both filled and empty.  As mentioned in an earlier article, with SAS 9.4, filled markers can now have outlines and fills, and can also have special effects.

Also with SAS 9.4, now you can specify group colors or markers that you want to use using the STYLEATTRS statement.  With SAS 9.4 M1, you can now define your own marker shapes, so you can have exactly the marker you need.  This can be done using two new statements in GTL and SG.  I will demonstrate the feature using SG syntax.

Here is an example of using the SYMBOLCHAR statement to define two new marker symbols from the ARIAL Unicode MS font.  I have use the Greek symbols for males and females.  Here is the graph using the SASHELP.CLASS data set.  Click on the graph for a high resolution version. 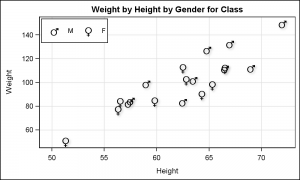 In this program, I have used the following features:

In the graph below, I have used the new SYMBOLIMAGE statement to define marker symbols from images.  This can be very useful, as you can use familiar images for groups, thus reducing the effort for decoding the graph.  This is very useful when using logos.  I did not use company logos to avoid any copyright issue but you can likely see the use case.   While I would recomment caution when using images from the web, you can certainly use images owned by your own company. 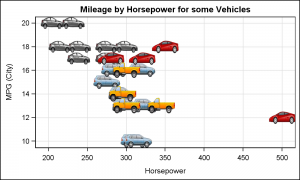 In this program, I have used the following features:

Finally, both SymbolChar and SymbolImage support a rotation angle.  In the example below, I have used that feature to use angular orientation for classification.  I originally saw this idea in a paper by Dr. Healey from NC State University, where he proposed that symbol orientation can be a "pre-attentive" feature for classification.

Here, I used the '25AC'x  Unicode character, which is the simple horizontal bar.  I defined a symbol using this character with rotation angle of zero, and one with angle of 90.  Here is the graph: 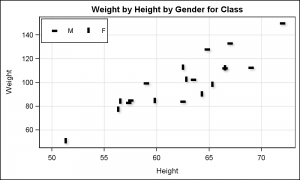