A large variety of graphs fall in the category of what I call a "Single-Cell" graph.  This type of graph consists of a single data region along with titles, footnotes, legends and other ancillary objects.  Legends and text entries can be included in the data area.   The data itself is displayed in a single rectangular region bounded by a set of X and Y axes.  Here is an example of such a graph popular in the Clinical Research domain.  Click on the graph for a higher resolution view: 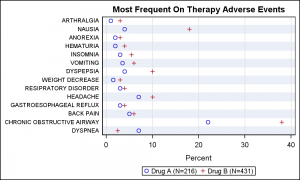 The SGPLOT procedure is ideally suited to create such graphs.  But in many cases it is useful or necessary to add a second display of data in the same graph.  In this case, we would like to add a display of the relative risk values to the graph, and sort the data by descending risk.  Such a graph can be created using a two cell graph using GTL as described in Most Frequent Adverse Events sorted by Relative Risk.  This graph uses the LAYOUT LATTICE to create a two cell graph, and then each cell is populated with the appropriate plots.

However, it is also possible to create what appears to be a 2-cell graph using SGPLOT using the "axis-splitting" technique I have described earlier.  The graph still has only one cell.  But, each cell can have up to four independent axes (X, Y, X2 and Y2).  Each plot statement placed in the cell can be associated with one pair of x and y axes.  Also, each axis can be restricted to use portion of the graph width or height by using the axis offsets.  We can use a combination of these to create two independent graphs in the same cell.

Here is such a graph created using SAS 9.2 SGPLOT procedure.  This graph appears to have two cells, one for the percent values on left and one for the relative risk on the right.  But, it is really only one cell, divided into two parts as described below. 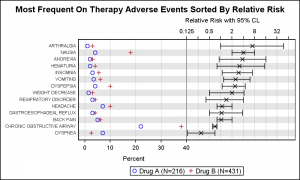 Note the following features of this graph and code:

Some of the issues mentioned above are addressed in in SAS 9.3 version as shown below.  Here, the Y axis tick value fit policy is set to none, thus allowing the values to crowd together if needed. 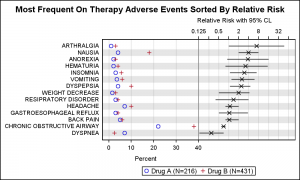 With SAS 9.3, the X and Y axis tick value size can be set in the syntax, and also the Y axis fit policy is set to none.  Now, tick values can get closer to each other without being suppressed.  Note, the error bars are drawn using the highlow plot to avoid the bar caps.

With SAS 9.4, additional features are available to improve this graph. 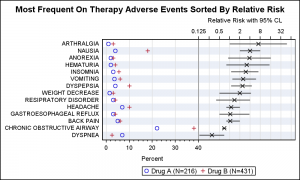 Now, the label position for X and X2 axis are set as "DataCenter".  This means the label is automatically drawn in the data space of the axis, not the center of the whole axis width.  Now, we no longer have to pad the axis label with leading or trailing blanks.

We have gone back to using the scatter plot for the relative risk bars and used the NOERRORCAPS option.  Also, we have used COLORBANDS option on the Y axis to create the alternate horizontal bands.  We no longer have to add a reference line to do this which requires guessing at the width of the line. 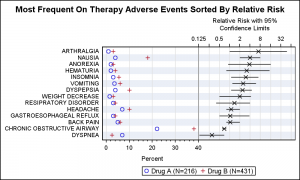 Note the X2 axis label is fully spelled out, and has wrapped within the data space for the axis.  This will work for all axes.  Minor ticks are also displayed for the x axis.